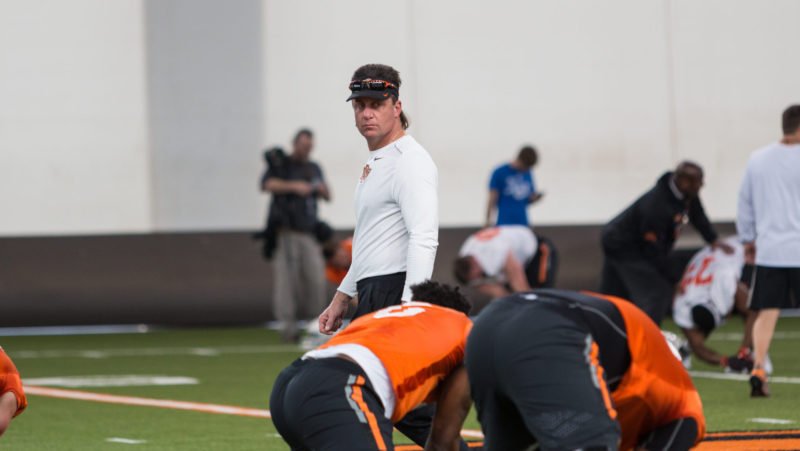 Biletnikoff Award finalist James Washington had three scholarship offers out of Stamford High School in the central plains near the Texas Panhandle. One of them was Texas State.

Oklahoma State coach Mike Gundy relived Washington’s recruitment and his trust in lesser-touted prospects at Big 12 Media Days. He said receivers coach Kasey Dunn leads that charge, and before him was Gunter Brewer’s evaluations like that of former fifth-overall pick Justin Blackmon.

“Blackmon was a two-star,” Gundy said. “We’ve had a lot of success taking guys that other people didn’t think were good enough, and we thought they fit what we did. Maybe they wouldn’t be good enough somewhere else.”

Blackmon was listed as a three-star on 247Sports, Rivals and ESPN but was not ranked highly on any of those sites. On ESPN, he wasn’t ranked regionally or even in Oklahoma. Blackmon’s recruiting story was slightly more intense than Washington’s though.

Four offers were waiting for Blackmon, the product of Plainview High School in Ardmore, including Missouri and Colorado. He was also chased at least slightly by North Carolina, Kansas State and Oklahoma. Washington was a closed book.

“I still remember (Dunn) coming in my office,” Gundy said. “I think it was October and he said, ‘Coach, I’ve got a kid I need you to see. He’s at a real small school in west Texas. He’s a tennis player, basketball player, baseball player, football player, all these different things. I think he’s a big-time player, but nobody’s recruiting him.’”

Despite a late run from TCU, that was it.

“Really wasn’t much of a recruiting battling,” he said.

The Cowboys don’t get into too many wars over prospects anymore, mostly because few battle-worthy recruits are seeing OSU as a legitimate landing spot. OSU has only signed 38 four-star recruits since Gundy became coach in 2005 and zero five-stars, according to 247. As for three-star prospects, there have about 200 of them.

“We go after all of the so-called top-rated guys in the country,” Gundy said. “A lot of times they don’t show interest in us, so we continue to migrate toward young men that love football, that are committed to something other than themselves. We want them to be committed to our team.”

By choice or by default, OSU has made a lack of top-tier talent turn into about 10 wins per season. In fact, OSU is No. 11 among all NCAA Division-I teams in wins since the 2010 season, right behind Wisconsin and LSU and in front of Michigan State, the types of teams you habitually see beating out the nation’s best for those top recruits.

Recruiting based on evaluations, not hype or ratings, is an unquestionable gamble. Defensive end Cole Walterscheid was taller than 6-foot-5 and thinner than 210 pounds when he got to OSU. It has worked. Running back Jeff Carr was a two-star guy with one offer and a 2,222 national ranking. He was the Cowboys’ leader in yards per carry last season.

“Do you ever worry about it?” Gundy said. “Sure. But you gotta go with what you think’s best.”