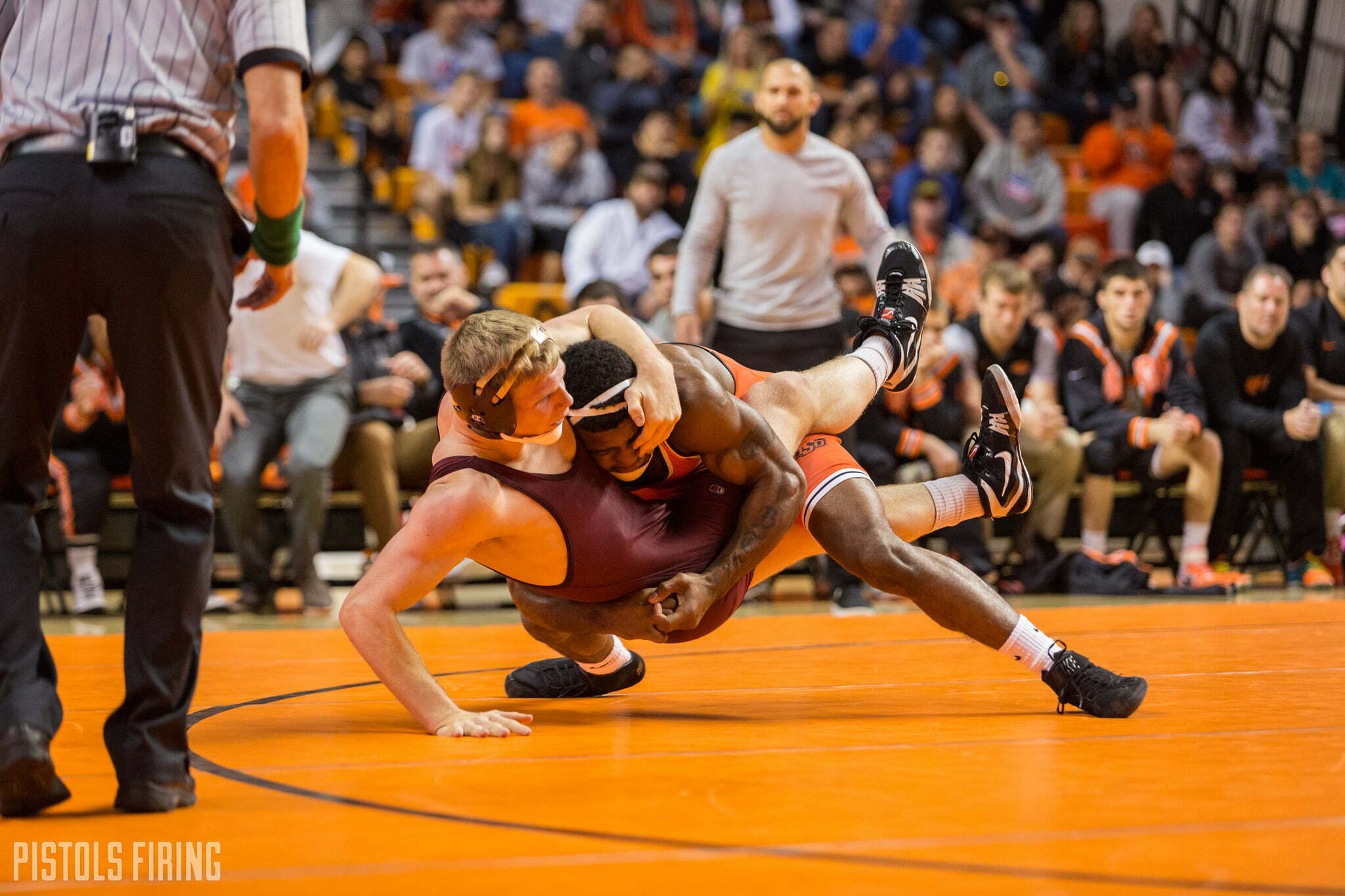 If you’re going to make a home dual this year this would be the one I’d recommend. Northern Iowa will be pretty good and I know most OSU fans enjoy the Bedlam bloodbath. But if you’re looking for a dual with real intrigue, good wrestling, and big time matchups this is the one.

If you can’t attend the dual Saturday night at 7 p.m. in GIA it will be televised on Fox Sports Oklahoma. If you’re out of state and have a subscription to Flowrestling you can watch it there.

Piccininni will be taking on Mizzou’s Barlow McGee. Nick is a solid favorite here but I’ve seen McGee wrestle well at times. In their college careers they’ve actually split with Nick dropping one to McGee his true freshman year and winning one last year. Just because of their history I’m going to pick Nick to win by decision, but don’t be surprised if he gets his top game going and picks up a major here.

Brock’s the favorite here. He beat Erneste pretty comfortably twice last year but Erneste has looked really good this season. As long as Kaid stays away from funky stuff that gets him in trouble, he’ll be fine. His only two losses this year came when he went for a throw early and was put on his back and another when he was up late and was put on his back. I’ll take Brock by decision.

Heil will be an underdog, probably for the first time since his sophomore year. He’ll be taking on the No. 3-ranked Eierman. Dean has beaten Eierman twice. Eierman is good. I watched him wrestle Kaden Gfeller a couple times early this year and he’s pretty impressive physically. I like Dean here, but if you asked me early in the season if anyone would knock off Heil in a dual I would’ve picked Eierman over Jack and Meredith.

This is a big match for Boo Lewallen at 149 vs. 3rd-ranked Leeth. Boo didn’t look great in his first two outings as a starter but got back on track a bit with two bonus point wins last weekend. Boo actually beat Leeth, and did it fairly comfortably, early in the year. Leeth has been on a tear since and beat some good wrestlers moving him up to 3rd. Boo really needs to solidify his status as the starter and a contender to be an All-American.

At 157, Jonce Blaylock will be an underdog. Mizzou’s Joey Lavallee is really good. Just giving up a decision is something fans should be okay with. An upset would be incredible.

The talent level at 165 pretty heavily favors OSU if Rogers wrestles. He was hurt and didn’t wrestle last weekend though.  Smith made it sound as though it wasn’t too severe. Hopefully Rogers is back, he’ll be needed here.

This should be fun. No. 14-ranked Jacobe Smith and No. 4-ranked Daniel Lewis wrestled a pretty insane freestyle match at University Nationals last year with Smith making an incredible comeback and coming out on top. A win here would put Smith a lot more solidly in the All-American conversation. For those of you that don’t know the scoring, rules, etc… are very different in freestyle but there was a ton of offense in this first match. Should be an exciting one. One big concern I have for Jacobe here is Lewis’ top game is really solid. It didn’t really come into play in this one because it was freestyle. Hopefully Smith doesn’t have any problems getting out from bottom.

Keegan Moore just needs to keep winning. He won two close ones this weekend and needs to keep it going. He’s one of few guys on the bubble of an NCAA tournament qualification. He’ll take on Mizzou’s Canten Marriott and has the ability to win this one. OSU will need it for the dual and he’ll need it to qualify for the NCAA tournament.

At 197, you have No. 3 Preston Weigel and No. 7 Willie Miklus. Miklus was ranked in the top 5 for a while but has dropped a few. I’ve been incredibly impressed with Weigel so far this season. In my opinion he looks like the best wrestler on the team currently. He’s developed some offense on his feet to go with his incredible mat game. Really like what I’ve seen from him. Miklus is a little undersized at 197 and I really think Weigel handles him comfortably in part because of that.

If the dual comes down to HWT, fans should feel pretty good. Derek White will be heavily favored and you should expect bonus points.

I personally expect OSU to settle back in a bit and wrestle well here. They weren’t at their best in Iowa, but being back home for a few weeks I think will mean a lot. One variable that’s in Mizzou’s favor is OSU wrestles again Sunday and they don’t. This means OSU will have another weigh in Sunday to worry about where Mizzou won’t. Hopefully it’s not a major factor, but it could be. Overall Mizzou in many ways is a better team than Iowa, but OSU matches up better here and I think could and probably should pull the upset.