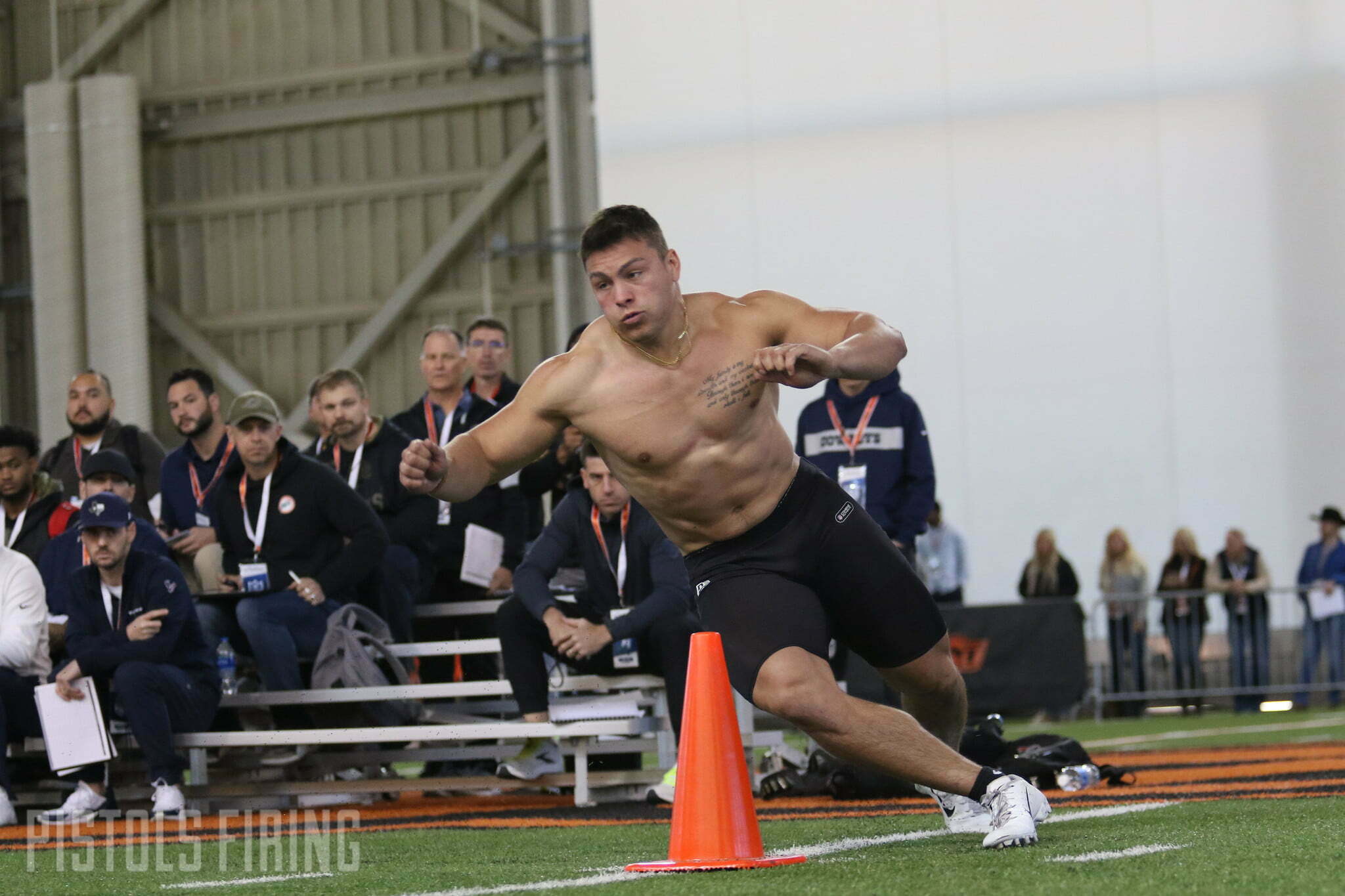 STILLWATER — Devin Harper’s first vertical jump was null and void after he outjumped the device used to measure how high he got.

Oohs and aahs broke out in the weight room in the west end of Boone Pickens Stadium as Harper brought his hands through every bristle used to track how high he leapt. When he landed OSU strength coach Rob Glass and others had to raise the device and give Harper another jump.

It wasn’t a fluke.

Harper took to the skies again, finishing with a 40.5-inch vertical. That was highest among players participating in OSU’s Pro Day, and it would’ve tied for fourth among all players invited to the NFL Combine, which would’ve ranked second among combine linebackers.

“I did what I had to do, what I’ve been training for for three months,” Harper said. “I did it.”

After recording a 39.5-inch vertical at the combine, Malcolm Rodriguez didn’t jump Thursday. After not benching in Indianapolis, Rodriguez raised everyone’s eyebrows in the lift in Stillwater. Rodriguez repped 225 pounds 36 times in front of NFL scouts and his teammates huddled around him. That’s four more than anyone, regardless of position, did in Indy. Wyoming linebacker Chad Muma did the most at the combine among linebackers, getting the 225 pounds off his chest 27 times.

“It felt like old times, for sure, like in the weight room,” Rodriguez said. “Body by Glass is what we call it, so just to hear them cheer me on, it was awesome. I definitely felt it, so getting those extra reps helped.”

Rodriguez said that was a personal high. Alongside Harper, Rodriguez has spent the offseason working out in Arizona and said he was getting 33 or 34 reps leading up to Thursday, but his teammates hyping him up gave him the energy to get the other reps. After the workouts, Harper said he was hoping Rodriguez would’ve hit 40.

Having been invited to the combine, Rodriguez had the luxury of picking his shots at OSU’s Pro Day. Ever the underdog, Harper worked every drill and impressed in just about everything he did.

There isn’t a laser in the Sherman Smith Training Center, so 40 times are unofficial (and media-timed 40s are extra unofficial). But PFB clocked Harper running a 4.44 on his first attempt and a 4.47 on his second. A 4.44 would’ve tied for second among linebackers in Indianapolis. A 4.47 would’ve tied for third.

Harper’s 21 bench reps weren’t Rodriguez levels of crazy, but he still would’ve tied for fifth at the combine among linebackers. For much of his college career, Harper was a depth piece in Stillwater, biding his time for the 2021 season where he had 96 tackles, 11 tackles for loss and six sacks.

His most memorable play as a Cowboy came when he stopped Oklahoma quarterback Caleb Williams on fourth down. After narrowly missing Williams for a sack, Harper bounced from his belly to his feet and chased the shifty quarterback down before he could get to the sticks.

As good as he was for the Pokes this past season, Harper might just be getting started.

“When I didn’t get the invite [to the NFL Combine], it kinda hurt, but it just added fuel to the fire at the end of the day,” Harper said. “I just had to go out there and show what I had, what I could do on Pro Day, which is what I did.”