UPDATE: Kelly Hines spoke to Offray about all of this here.

Ok I’m just going to give you what I know and leave the arguing and hypothesizing up to you.

At first glance the photo actually looks a lot worse than it is. It looks like a bag full of bills sitting on his lap but I have since been made aware that the following bag actually exists in exchange for U.S. currency: 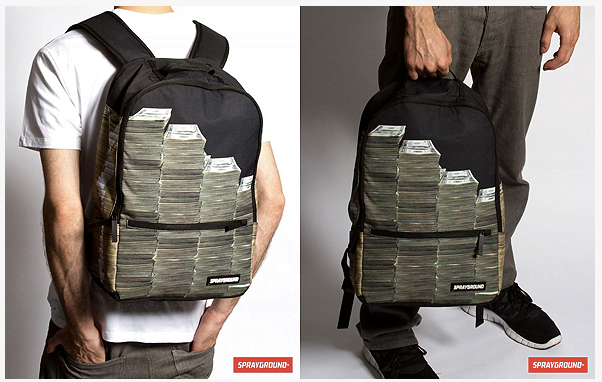 Right, I don’t get it either.

Offray tweeted around the same time that he was on his way “to the dealership” presumably to purchase a vehicle with the money. I don’t know what that means but I guess it provides a little context to the question “why the H is this guy tweeting photos of $100 bills?”

Anyway, five days after tweeting that photo Offray committed to Oklahoma State after being offered a scholarship on the spot at last weekend’s OSU football camp. Here’s what he said to the Rivals (via the Oklahoman):

He also tweeted this:

So there are definitely plausible explanations other than “Boone is sending him FedEx packages” but if we are dishing this stuff out, as my boy Amilian texted this morning, “don’t we feel like that money could have been used somewhere better than a 0-star CB from Louisiana?”

My response: yeah, to buy a clue for Justin Gilbert on passing downs.