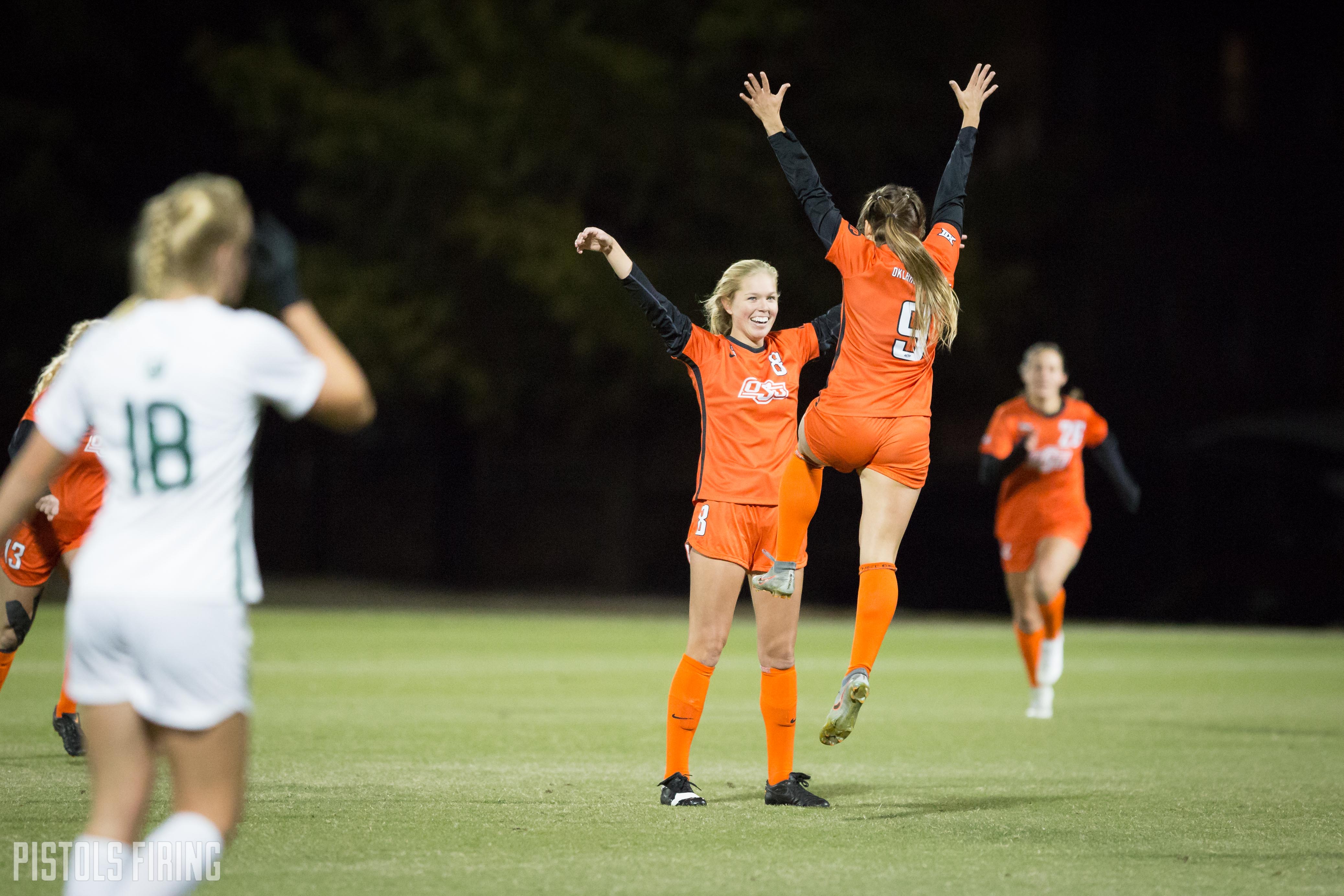 STILLWATER — The Cowgirls’ Halloween quest for a Big 12 title turned into a slasher flick.

The Oklahoma State soccer team beat Baylor 3-0 on Friday night to secure the program’s seventh conference title and second in the past three seasons. Three OSU seniors met with reporters after the win, and all said some form of “Sorry, I can’t stop smiling.”

“It’s awesome,” Jaci Jones said. “And to do it out here in front of everyone and the way we played, it was amazing. It couldn’t have been better.”

Gabriella Coleman started the scoring early. In the seventh minute, Julia Lenhardt’s shot hit off the crossbar. Baylor goalkeeper Jennifer Wandt was out of position after her attempted save, and the ball fell right to Coleman’s foot. She tapped in the rebound for her sixth goal of the season.

Follow up score! @gabriellacol8 nets the first goal of the evening for the Cowgirls. OSU up early 1-0. #okstate #GoPokes pic.twitter.com/AuAGcqMsGk

Lenhardt, a senior on this senior night, ripped a ball from well outside the box into the top-left corner in the 10th minute. It was her third goal of the year. Cristiano Ronaldo might’ve dressed up like Lenhardt for Halloween.

FROM WAY DOWNTOWN!! @julialenhardt_ puts one from deep as the Cowgirls take an early 2-0 lead. #okstate #GoPokes pic.twitter.com/xi54NrTMqt

“It was a world-class goal,” OSU coach Colin Carmichael said. “If that’s not on ESPN or NCAA Goal of the Week, something’s wrong because that was stunning. It was a stunning goal.”

Things got a bit spooky for the Cowgirls with about 10 minutes left in the first half. Baylor’s Camryn Wendlandt’s shot through traffic ended up rolling the length of the goal line with an open net, but OSU was able to get it cleared.

Baylor had the Cowgirls pinned in their defensive third for much of the end of the first half, but nothing came of it. It was suspenseful in the same way the first hour of “Paranormal Activity” movies are, where there are plenty of jump scares, but not a whole lot happens.

The Cowgirls were all over Baylor in the second half. After 29 minutes of being stuck inside their box, the Bears finally conceded the third goal of the game in the 74th minute.

It was a goal-line scrum with seven players trying to get to the ball. Camy Huddleston was awarded the goal, her second in as many games.

OSU was predicted to finish seventh in the league in the Big 12 preseason coaches poll, and here the Cowgirls are. It’s their seventh Big 12 crown overall. It’s OSU’s fourth regular season championship to go with the Cowgirls’ three tournament titles.

“Last time (in 2017) we were (preseason) ranked sixth, and we won the Big 12,” Lenhardt said. “So we were kind of like, ‘These rankings, they mean something.’ But they don’t. We have so many people to prove wrong. As a team, we knew who we were. We know how good we are. We can beat anyone if we put our mind to it.

“Yeah, it meant something, but it just meant that we had to prove everyone wrong.”