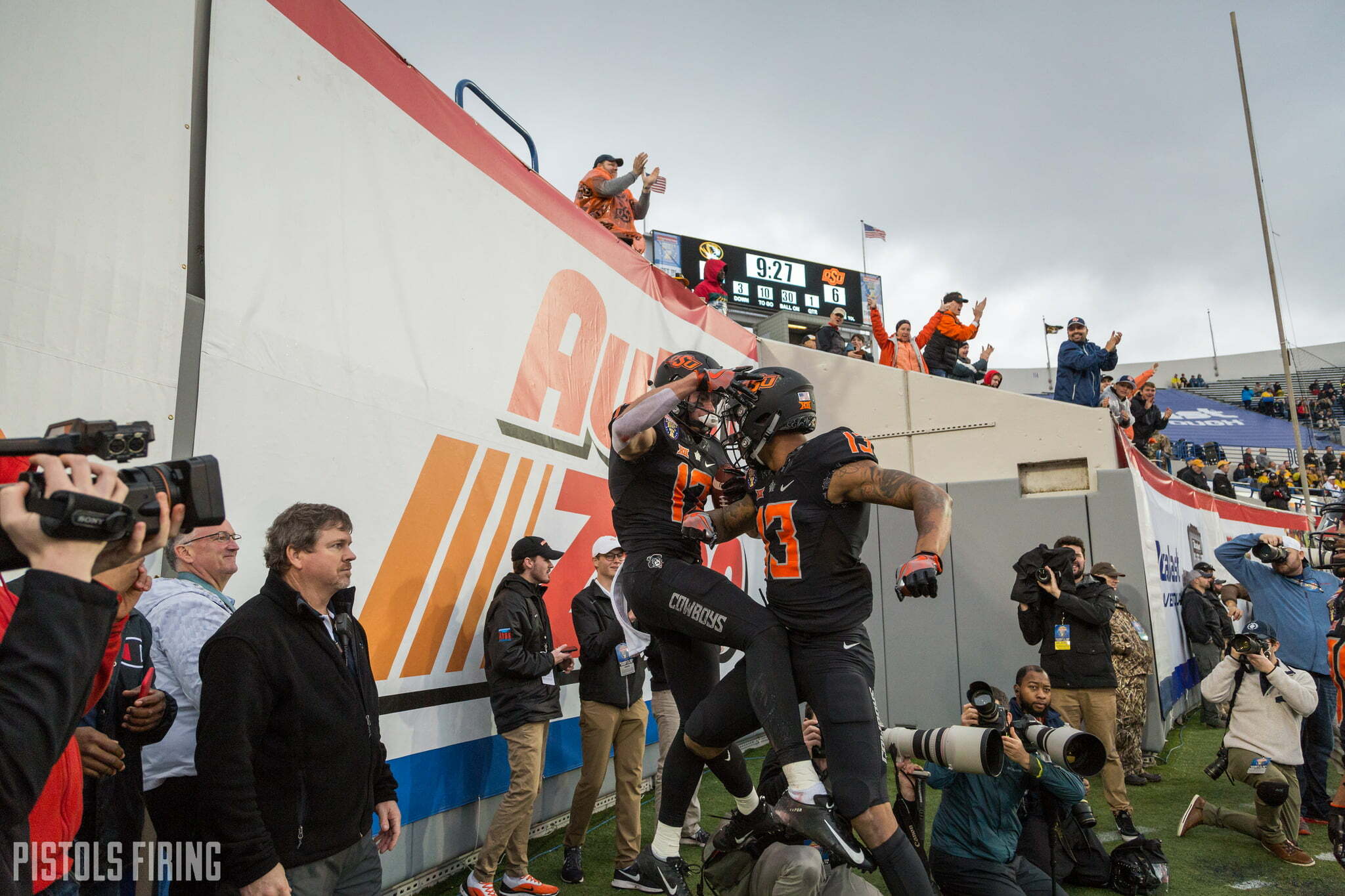 There are so many ways to look at college football teams and programs. So many ways. There are no absolutes, no 100 percent correct answers and arguments other than “Bama is good and so is Clemson it seems” are pulverized on a monthly, if not weekly, basis.

Which is why all of this is so dang fun.

After looking at how the final 2018 AP Poll correlated to the last five years of recruiting for Oklahoma State and other teams, I decided to extend both recruiting rankings and team rankings (as determined by win-loss percentage) a few years.

Anyway, what I came up with are two charts. The first shows the top 50 recruiting teams in the country and how their classes panned out. I grouped them and labeled them (v homemade). 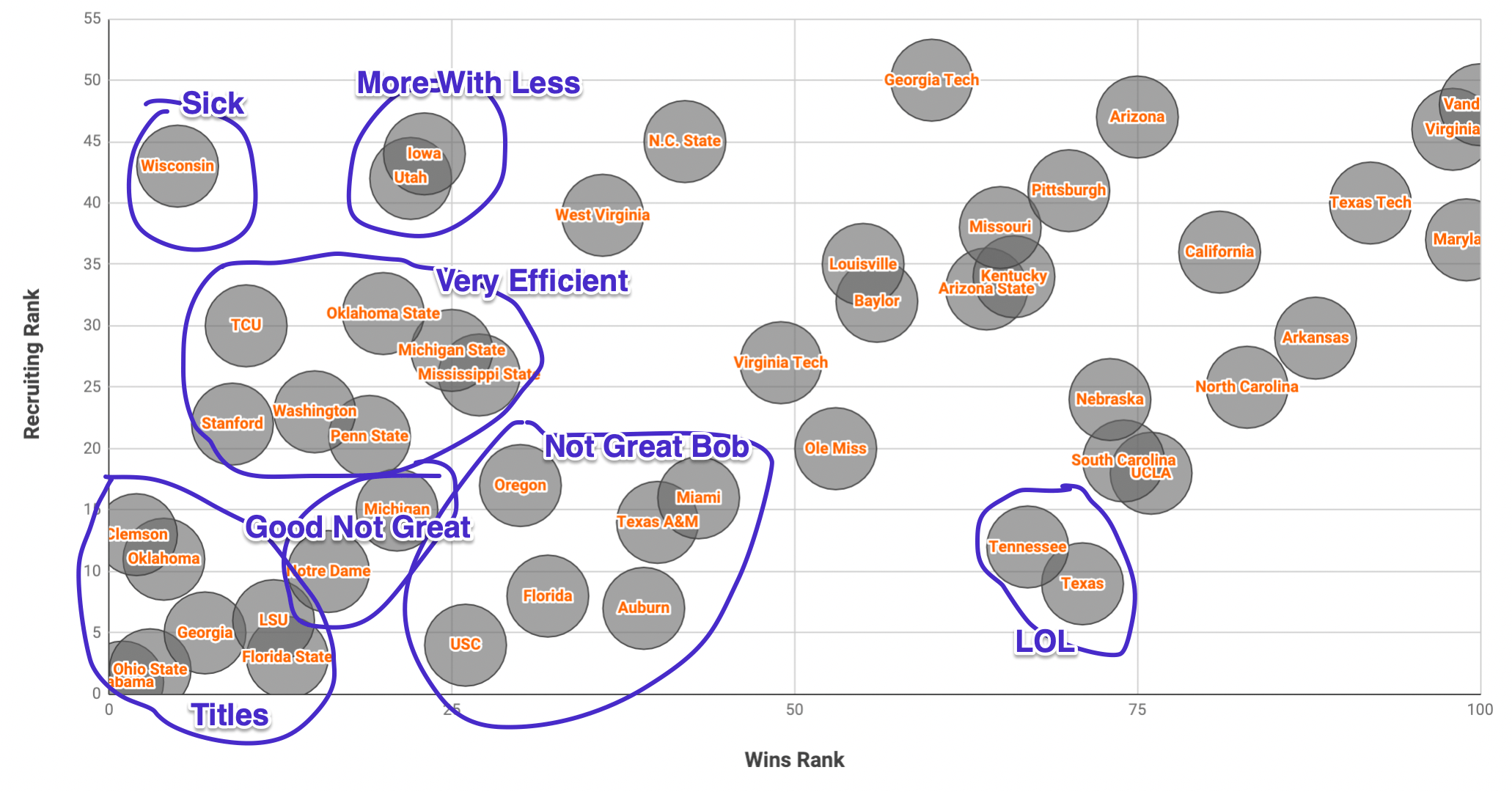 A few notes and thoughts.

• Texas and Tennessee are embarrassing. They recruit like Notre Dame and LSU and win like Pittsburgh and Arizona.

• Wisconsin is unbelievable. Fifth overall in winning percentage and 43rd in recruiting rankings. The mega-Oklahoma State.

• Oklahoma State is grouped in with teams like TCU, Michigan State, Washington and Stanford that produce at a high level without recruiting at a high level. All of these teams are extremely efficient with what comes in the front door.

• USC, Oregon, Florida, Auburn, Texas A&M and Miami are lesser versions of Texas and Tennessee. Not coincidentally, most of them have undergone coaching changes in recent years.

The opposite of this is looking at it the other way. So I made a chart of the top 50 winningest teams to see how they’re recruiting. This is probably the better way to look at it (and I enjoy it more), but I wanted to be fair to both ways. 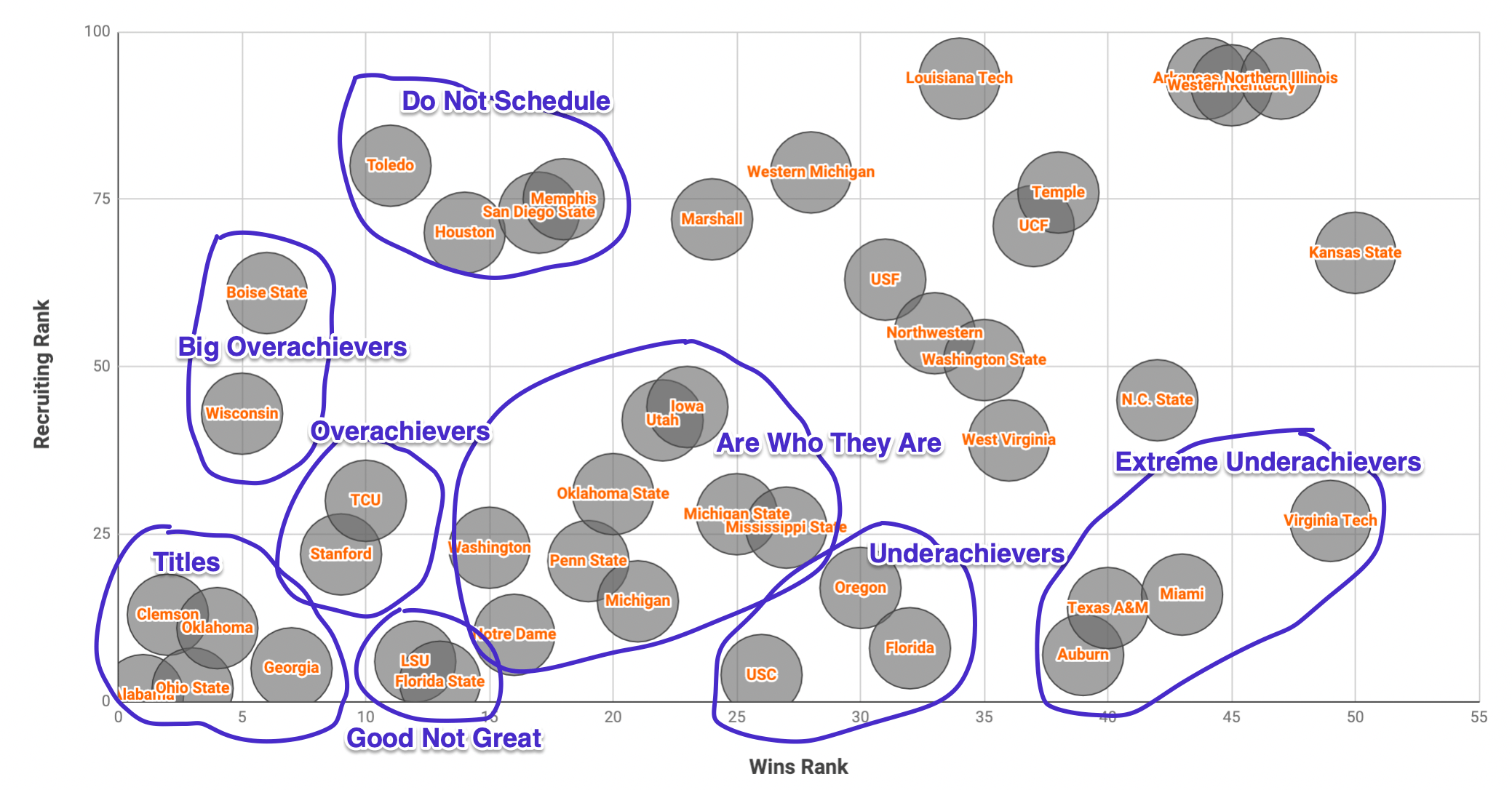 A few notes and thoughts.

• Boise joins the Wisconsin circle. The only reason they weren’t there in the previous chart is because they don’t recruit in the top 50. I think it’s fair to look at Wisconsin > Boise because of conferences.

• Oklahoma State again is among the Washingtons and Penn States of the world. Unfortunately for the Pokes, five years is a bad number because that 2014 season was sandwiched by 10-win campaigns on either side.

Regardless of your interpretation of the data, these are fascinating graphs to look at. They meet the eye test in most cases, too. I can watch Georgia and OU and Alabama and think, Yeah, those are elite players that perform at a high level. I can watch Texas and think, My kids’ playroom is more organized than this!

And I can watch Oklahoma State and think, Man, they’re really good with solid but not elite talent, I wonder what they could be with just a little bit more?