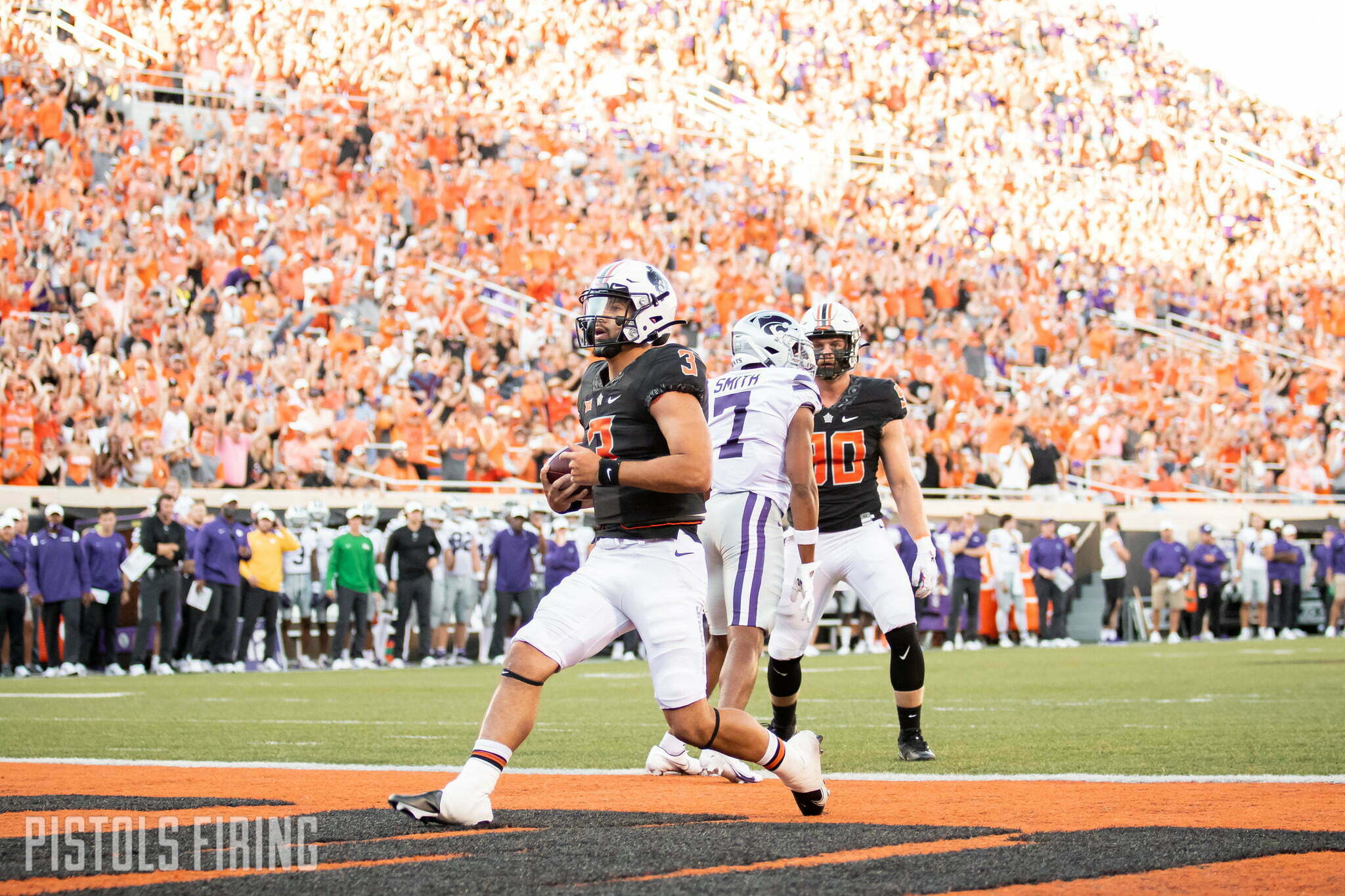 On Saturday, a pair of dynamic passers will meet up in Austin for more than just bragging rights. Spencer Sanders’ unbeaten Oklahoma State team comes in ranked No. 12 in the nation, off a bye week. But Casey Thompson’s No. 25 Texas, a two-loss team fresh off of the worst type of heartbreaking upset, is the favorite. Both would like a chance to compete for a Big 12 title in a couple of months.

While the Cowboys and Longhorns may have different stories heading into this weekend, their quarterbacks’ tales are similar, if not intertwined.

Before we look at what sets them apart, let’s see what Sanders and Thompson have in common.

Both were prized prospects in the 2018 class. Sanders was the No. 8 dual-threat QB according to 247Sports, hailing from Texas by way of Denton-Ryan while Thompson was No. 14, coming out of Oklahoma, by way of Newcastle and, formerly, Southmoore.

And both were recruited, heavily, by Mike Gundy.

“Well, we offered him, I think he was a junior, early his junior year, maybe. I can’t remember,” said Mike Gundy of Thompson this week. “That’s been a long time ago. We offered him. We liked him from Day 1.”

Actually, it was during Thompson’s sophomore season at Southmoore that the Cowboys officially extended an invite, while the son of the former Sooner was on an unofficial visit during OSU’s Homecoming. OSU was the first Big 12 school to offer and second Power 5 program following only Oregon State. Either way, it was a long time ago, as Gundy said.

“He came to camp. (Charles Thompson, Casey’s father) and his wife came up in my office, and we visited and had good conversation. (Mike) Yurcich and myself told him we felt like that he’d be a really good player in the Big 12 conference and wanted him to come to Oklahoma State. Charles, I asked him if he was OK with that. He said, ‘Sure, if he wants to come to Oklahoma State, I’m good with it.’ And then we offered and kind of hung around, but in the end we weren’t in the picture for whatever reason.”

Thompson would visit Stillwater a number of times, like he did Norman, most Big 12 schools and a smattering of other name brand campuses like those of Ohio State, Clemson, Texas A&M and Miami. He would eventually spurn the Cowboys, his legacy Sooners and others to play at Texas.

The offer to Thompson happened on October 26, 2015. Almost a year later, the Cowboys extended a scholarship to their eventual franchise QB. On Oct. 1, 2016, Gundy and Co. offered Sanders but they were far from the first. His offer sheet was in double digits when OSU came calling, but four months later he pledged during a visit to Stilly and never wavered.

But before either decision was made, OSU was sold on both QBs and was ready to move forward with either as the face of the program.

This week, Sanders was asked about Thompson and he both being recruited by OSU. It’s an interesting angle but provides zero drama as far as the third-year quarterback is concerned.

“I’ve never been scared of competition,” said Sanders. “I don’t really remember who they were recruiting at the time. I just knew like ‘Hey, I wanted to go here, I’m going to go here.’ It’s all about competition. I’ve competed my entire life, so why stop now.”

We know the rest of Sanders’ story thus far. After a redshirt year behind an outgoing Taylor Cornelius, Sanders stepped into the QB1 opening and has been the Pokes’ passer ever since.

While Sanders took the reins of OSU’s offense in Year 2, Thompson had to wait a bit longer. He was hampered by an unexpected franchiser in Sam Ehlinger and then lost out on the starting job, briefly, to Hudson Card. Thompson didn’t do enough in three years on the practice field to usurp the status QB, but once he was given a shot under the lights, he was a game-changer. He got his first career start against Rice and did enough to steady the Longhorns after their loss to Arkansas.

In his four starts, Thompson has averaged 249 yards per game, thrown 13 touchdowns and three interceptions. He’s coming off of the best game of his career, statistically, in his first loss as a starter. Against OU, Thompson threw five TDs, no picks while slinging it for a career-high 388 yards.

In his four starts this year, Sanders has averaged 193 yards, thrown TDs and four picks. Sanders has outrushed his counterpart 196 to 91 in total yards in all appearances this year, but Thompson has run for three TDs to Sanders’ two.

Even though Sanders and Thompson have never met as foes on the field, their paths have crossed a time or two to get them to where they are now, a duel between 4-0 QBs. The former is hoping to live up to his team’s spotless record and the latter will be scrambling to keep his team relevant in the conference title race in just his fifth career start.