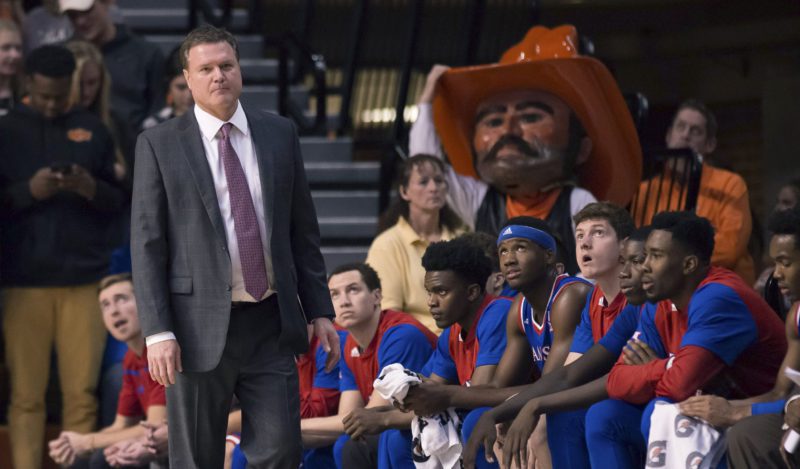 It’s going to be electric on Saturday night as the Cowboys close out their regular season with a Phil Forte Senior Night against KU.

Chills. Emotions. Anxiety. All. Of. It.

Actually, it was picked as the best game of the week according to ESPN’s metrics.

The perennial Big 12 favorite heads to Stillwater with their 13th-straight conference title (shared or otherwise) already in the bag and a No. 1 seed in the Tournament almost as concrete. Led by maybe the best player in the nation, Frank Mason III and freshman phenom Josh Jackson, the Jayhawks will roll in Stillwater on a league-best eight-game winning streak.

Historically, Kansas has owned the series. The Jayhawks have come out on top in 112 of the 169 meetings between the two schools.

But lately the Cowboys have had the upper hand when fueled by the ghosts of Mr. Iba. OSU has won the last three home games against the Jayhawks and five of the last seven. That is not a typo!

But it’s not just Ford. Sean Sutton won his only home game against the Jayhawks. Add in Eddie’s 6-5 record and OSU has won 11 of the last 18 times they’ve hosted KU.

For just the fourth time since 1949, Oklahoma State will host the current No. 1 team in the country. The Cowboys are 2-1 in those games, the most recent was their 2010 win over KU.

But none of this matters on Saturday night. The Cowboys will need their best effort on the year to finish the regular season with a win.

What does a win mean for Brad Underwood and Co.?

One of the better single-season turnarounds in recent memory would be underlined by a massive win on senior night. The Cowboys would also bolster their already-solid Tourney resume. And more importantly one the nation’s best young teams will gain even more confidence — which is as precious as gold for a coach bent on wrecking havoc on your bracket.