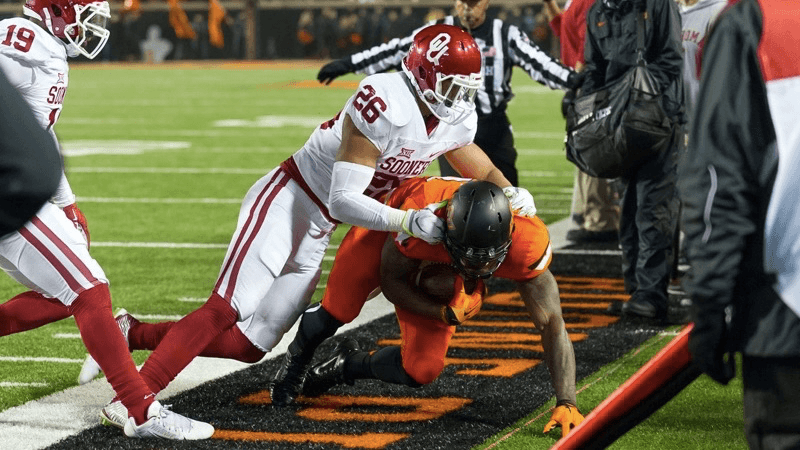 Horses. Stallions. Thoroughbreds. Call them whatever you want to call them, it’s clear OSU has a dearth of them.

I said this after the Baylor game, I’ll say it again. The only thing the last two games proved is that going 10-0 to start this season with this team was more impressive than we originally though.

OSU had the youngest team in the country in 2014 (or something close to it). It started a sophomore QB in 2015 and came within 60 minutes of the Big 12 crown. That’s pretty great.

But those last two games proved something stark. Mike Gundy has to start recruiting more of those aforementioned stallions.

The “going 10-0 with 11 four-star guys on your roster” thing is a lot of fun, but Art Briles and Bob Stoops have made it clear, the Big 12 title runs through Crootin’ U, and both of them have been better at it than Gundy has.

“As I said earlier, they had some big plays, and we looked tired,” said Gundy after Bedlam. “That’s my fault. I’ve got to do a better job of managing our players’ bodies and giving them a chance to play harder.”

“We looked tired on the kickoff they returned, and there were a number of times when their backs bounced off of our guys. We hadn’t really seen that much this year. I don’t want to take away from those guys, though. They’re good players.”

They are. And there are a lot of them. Look at this list of 2015 recruits for OU. They signed one fewer four/five-star this year than Oklahoma State has on its entire roster.

But it sure matters at the end of a long year when you have two heavyweights coming at you for the Big 12 title.

I haven’t always thought this way. I used to think stars didn’t matter if you had great coaches. That might be true for singular positions. Maybe for QB, maybe for something like tight end or middle linebacker where you have to be super smart and can use superior intelligence to outmatch athleticism.

But look where Gundy said there was a deficiency. Kickoffs. Athletes. Youngsters. Horses. Stallions. Crootin matters for depth and because, if you play the percentages, better crootin schools are going to be better football schools (if they’re well-coached at all).

That’s not to say a Kansas State or an Oklahoma State isn’t going to win the Big 12 every once in a while. It happens. But it’s tough to beat all the schools better than you at crootin (OU, Texas, Baylor etc.) in a single year. Really hard.

One other thing my buddy Quade brought up at the game on Saturday is why do we seemingly say linemen are interchangeable? We seem to have been spoiled by the Joe Wickline years when they seemed interchangeable. Baylor and OU recruit men on both sides of the line. That could not have been more evident over the last two weeks.

Other people keep saying, “our coaches suck … I’m tired of getting out-coached.” I’m sorry everybody (especially you, Emmanuel), Oklahoma State isn’t getting out-coached. It’s getting thumped by better players. The difference in recruiting becomes more and more clear as seasons wear on and teams deteriorate.

Berry Tramel actually wrote about this when it comes to quarterbacks. Same thing applies to every position, if only on a smaller scale.

Mike & Mike and Glenn Spencer are good coaches. Really good. Maybe even great. They took a bunch of two and three-star dudes and sniffed the Big 12 title. Gundy has turned the trick four times in six years. OSU has played its final regular season game for the Big 12 or Big 12 South title every year since 2010 except for 2012 and 2014. That’s disgustingly good.

You could argue that Oklahoma State has been the most consistently great Big 12 team over the last six years.

But now? Time to go get some more horses. Time to go even deeper. Because if the coaches actually are as great as they showed at times this year, having even within-striking-distance talent of OU means more Big 12 titles.