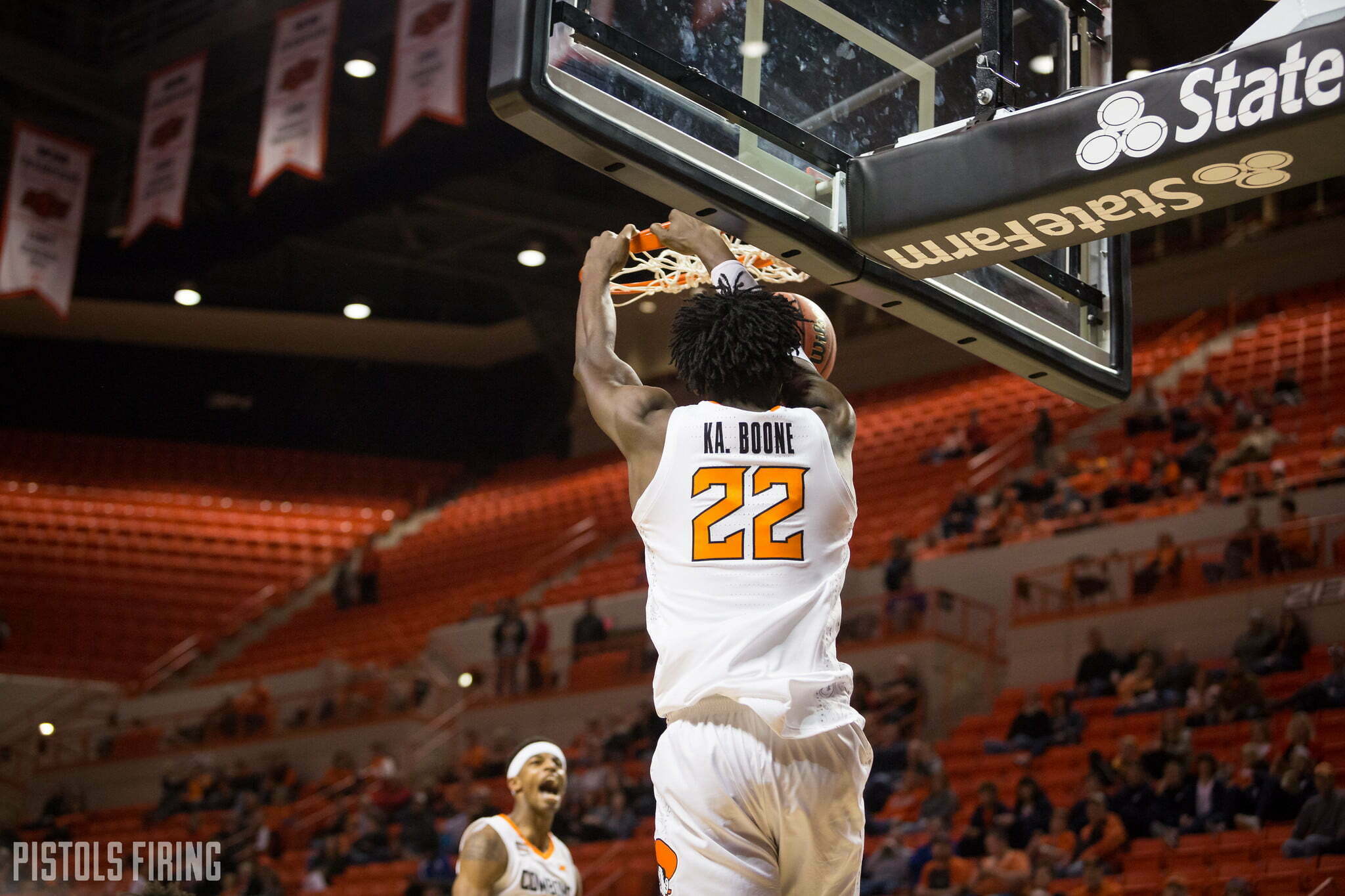 In the last few weeks, Mike Boynton has turned up the heat on a recruiting class that already ranks within the top 10 nationally. The commitment of four-star guard Donovan Williams only adds to the collection of talent coming to Stillwater, which looks to be the most impressive crop we’ve seen since 2005 (!). The No. 9 class nationally on 247 Sports (and No. 4 on Rivals) has the Chamber buzzing with talk of a March run.

As great as Cade Cunningham, Rondel Walker, Matthew-Alexander Moncrieffe and Donovan Williams look on paper (and in photoshops rocking the Cursive Cowboy)s, they’ll need some help. Enter the sophomore class that only scratched the surface last year of their potential. Look for these four sophomores to start to look and feel more like the top-25 class they were this season.

Chris Harris Jr.’s freshman season was cut short after a season-ending injury in early February against TCU. He averaged just 3.4 points per game on 29 percent shooting, averaging 15 minutes/game. Certainly nothing to write home about, but there’s room for a significant leap in year two for Harris.

Harris was a top-125 player in the class of 2019, a four-star that had Texas A&M and Texas Tech vying for him before committing to the Cowboys. His combination of size, athleticism, and shooting had Chris Beard hot on the trail, which should tell you all you need to know about his potential. Cade and Ice will handle the lion’s share of ball-handling and running the offense, but Harris has an opportunity to come off the bench and provide much-needed shooting and energy on the defensive end to provide a spark.

Anderson was another four-star guard in last year’s class, who got the chance to feature a tad more than Harris. The difference between the two guards is Anderson primarily ran the offense while giving Ice a rest, could be asked once more to man the fort as the backup point guard.

Anderson is a wiry, explosive athlete that showed the ability to be a pesky on-the-ball defender. His quickness allows him to stay in front of most guards in a way that Lindy Waters and Thomas Dziagwa could not at the level Anderson could, which contributed to foul trouble for Anei, Boone and the other bigs last season.

On the offensive side of the ball, Anderson has a quick handle and will grow into the kind of facilitator that Mike Boynton trusts. He won’t provide a lot of shooting, but he flashed potential to get to the basket, as well as kick out to open shooters. if he can spell Cade/Ice for five-minute stretches (or bump them to different positions on the floor) and give Big 12 point guards hell in short doses, he’ll be a real asset for Mike Boynton’s crew.

The less-heralded of the Boone twins, Keylan brings a fascinating skillset to the table. At 6’7 with long arms and above-average athleticism, Boone can guard multiple positions and will benefit from another offseason in the weight room to adjust to the physicality of the college game.

On the offensive side of the ball, Keylan showed real promise in conference play, knocking down 42 percent of his threes and providing some much needing spacing to the offense. Similar to Harris, Boone needs to be able to knock down threes for the offense to thrive around Cade and Ice. Three-and-D wings are seen as valuable assets in the modern game, and Keylan fits the mold. With a shortage of true wings on the roster, Keylan has a big opportunity to step into a large role in year 2, either off the bench or moving into the starting lineup.

Last but not least, the other Boone twin flashed his enormous potential in his freshman year. The numbers look modest, but as he entered Big 12 play, the light went on for the 6’8 forward from Tulsa.

Despite battling with bigs that held a significant height/weight advantage, Boone showed tenacity around the basket and the ability to use his quick feet and athleticism to get to the rim and finish. I’d expect Kalib to develop a little mid-range shot to his game as well, but with his back to the basket, he should be a nice scorer in the Big 12 this season.

On the defensive side of the ball, Boone had struggles with foul trouble as well. However, he also showed great instincts and swatted his fair share of shots. Boone finished 15th in the Big 12 in blocked shots per game despite playing just 11.7 minutes per game. He was also the de-facto backup center to Yor Anei, who found himself in foul trouble quite often.

Kalib’s numbers saw an uptick in conference play, and if you dig a little closer, you’ll see the makings of a future star. Averaging his numbers over 40 minutes, his line was this:

All the eyeball emojis. It’s no secret that Kalib Boone has the opportunity to be one of the best forwards on the team and in the Big 12 as a sophomore. His size and athleticism around the basket are going cause all kinds of issues for defenses, and he’ll see plenty of touches on offense whether he’s starting or coming off the bench. Buy your Kalib Boone stock before it’s too late.

Mike Boynton’s quartet of sophomores saw moderate playing time and success last year, but their development in 2020-2021 is going to be key for a run at the Big Dance and beyond. The shot-making of Harris Jr., Anderson, and Keylan combined with the interior scoring, rim protection, and energy of Kalib Boone will be key in replacing the production of Cam McGriff, Lindy Waters, and Thomas Dziagwa.

The incoming freshman will get all the shine, but the development of these four has the potential to make all the difference in 2020-2021.