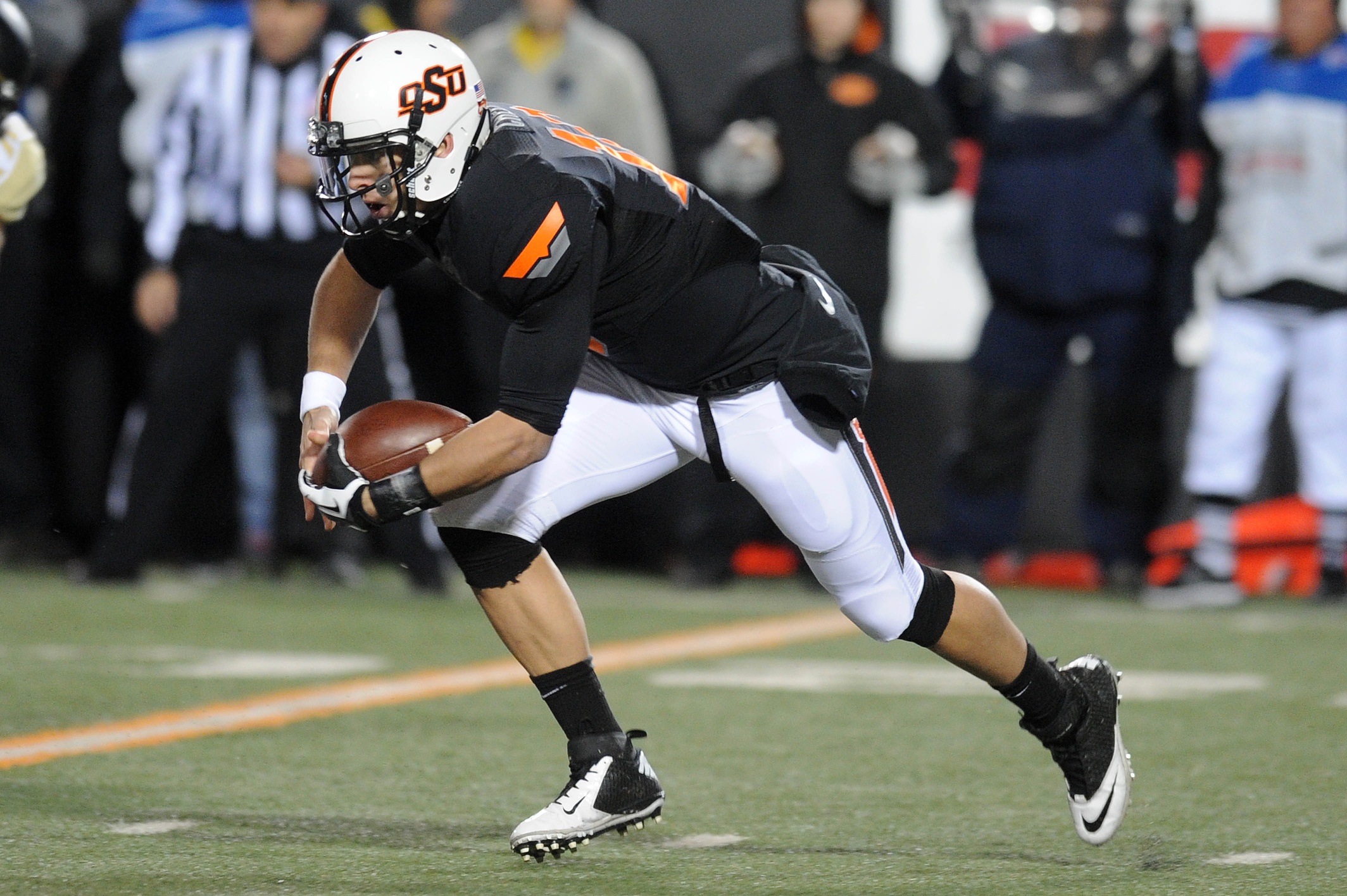 There has been quite a bit of hubbub about the whole “Clint Chelf can’t talk to the media” thing in the last week or so. The cousins Tramel wrote separate columns about the matter and largely got it handed to them in the comments sections and on Twitter and other places.

A couple of things before we get into my opinion on the matter.

1. These guys don’t need Clint Chelf quotes to write good articles. That’s not the point. Neither of them is whining about Gundy not letting him talk. If you think Berry Tramel needs the bland words of a fifth-year senior trained on “it’s a team game’s” and “my linemen are the best’s” then you don’t read Berry Tramel (or you think Clint Chelf is a lot more interesting than he actually is).

2. The point (and Jimmie mentioned this) is that Gundy is creating a story where there is none. If Gundy doesn’t think that college sportswriters are going to write about how the national player of the week (a freaking fifth-year senior, at that!) isn’t allowed to talk about his night, then he’s dumber than his tucked in hoodies suggest.

So while the play initially might have been to silence the QB controversy madness Gundy has fallen a step behind in this game and has instigated a week of “when’s QB1 going to talk” discussion. So as much as you want to blame the “Jokelahoman” (or is it “Jokalahoman”?) and Trammels for overblowing the story, they’re actually sort of underplaying it.

“Ultimately I have to make hard decisions and those are decisions I make. I could be wrong. I shouldn’t have went for it on fourth down at the 50-yard line. But ultimately I made decisions and it’s my call and I do it. It doesn’t have anything to do with you guys. Trust me. I like all of you guys, at times.”

Actually you should have gone for it. But I digress.

And this is what Gundy said after Chelf re-took QB1 from JW in October.

“Ever since we have started the year, there has been nothing but media opinion on who should play quarterback. And there is not really anything they can say about themselves or each other that is productive for the overall chemistry of the team, and me neither.”

But that was then, when the QB controversy was still raging (I guess) and this is now, when Chelf just tossed Bryce Petty’s plane ticket to New York up in the air and let Pistol Pete skeet shoot with it.

1. Mike Gundy doesn’t trust Clint Chelf — That would be extremely silly, especially given Chelf’s resistance to complain at all even though he’s been yanked around the last two years.

2. Clint Chelf asked Mike Gundy to keep him silent — OK, I’ll listen to that but I still kind of doubt it. It’s hard for me to believe that any college athlete, much less a QB, wouldn’t want his quotes in the papers. That’s a cool thing for a 21-year-old.

3. It’s not productive to the chemistry of the team — So why let anyone talk? Why let Tracy Moore and Josh Stewart talk about Chelf and Walsh?

So if none of these is the reason then I’m led to believe Gundy is just doing it out of spite at this point. I don’t know what other option I have. Gundy loves control (as any good coach should) and he’s exercising his over the situation to the detriment of how it’s portrayed in newspapers (and blogs).

Does Gundy really think he’s still protecting “the chemistry of the team”? Does he think the Tramels and Gina and Kelly are going to ask about what Chelf thinks about the QB race? Really? After he went 19/25 for 370 and three TDs against the No. 3 team in the country? Come on.

I’ve been asked, as a fan, if I care if Chelf talks.

Call me crazy but part of being a fan is understanding why things happen and what they mean. Who else can explain that better than QB1? I understand casual fans simply want to be entertained but I am not a casual fan and given the fact that you’re reading this blog I’m guessing you aren’t either.[1. Side note here: As the proprietor of PFB I’m actually thrilled by this development. I would prefer no athlete ever get quoted again given that getting quotes is one of my big competitive disadvantages.]

There was a great quote from Chip Kelly in Sporting News last year regarding letting players talk publicly. He was referencing Twitter but the mantra applies.

“If you can’t trust your players on Twitter, you probably can’t trust them on third down.”

And I’m pretty sure we’ve learned we can trust Clint Chelf on third down.

I got an email from a friend earlier this week about how he thought Berry and Jimmie were correct and asking this question:

In some ways, Gundy is costing Chelf post-playing career. Think about how revered Weeden was and how now he can pretty much write his ticket anywhere in Oklahoma. Doesn’t Chelf deserve the opportunity to make a name and brand for himself? He’s helping lead this team to a potential Big 12 title and I just feel like he deserves more than what he’s getting.

The fallacy is that Gundy’s job is anything outside of winning college football games. It’s not, but the problem I have, as this person had, is that I don’t think there’s any rhyme or reason to what Gundy is doing. It’s uneven. He trusts Weeden but not Chelf? It feels like he’s parenting a three-year-old right now.

“Because I said so.”

The point of letting any of your players talk to anyone is, presumably, to create goodwill regarding the program. It is for your athletes to say “we do things the right way, this place is amazing, look at the way we just played against the No. 3 team in the country.”

If it’s not, then why do any of them ever talk to anyone?

At the 2012 Fiesta Bowl Gundy was asked about Brandon Weeden. Here’s what he said:

“He’s been a great ambassador. He has been tremendous with the people. He’s graduated. He’s won a number of games. I think the football part of it speaks for itself, but what he’s brought to the table from a leadership standpoint and the way he has handled himself out there with the public and the Oklahoma State people and the media has been tremendous.”

So I continue to ask…

Through all of this I still don’t have an answer.