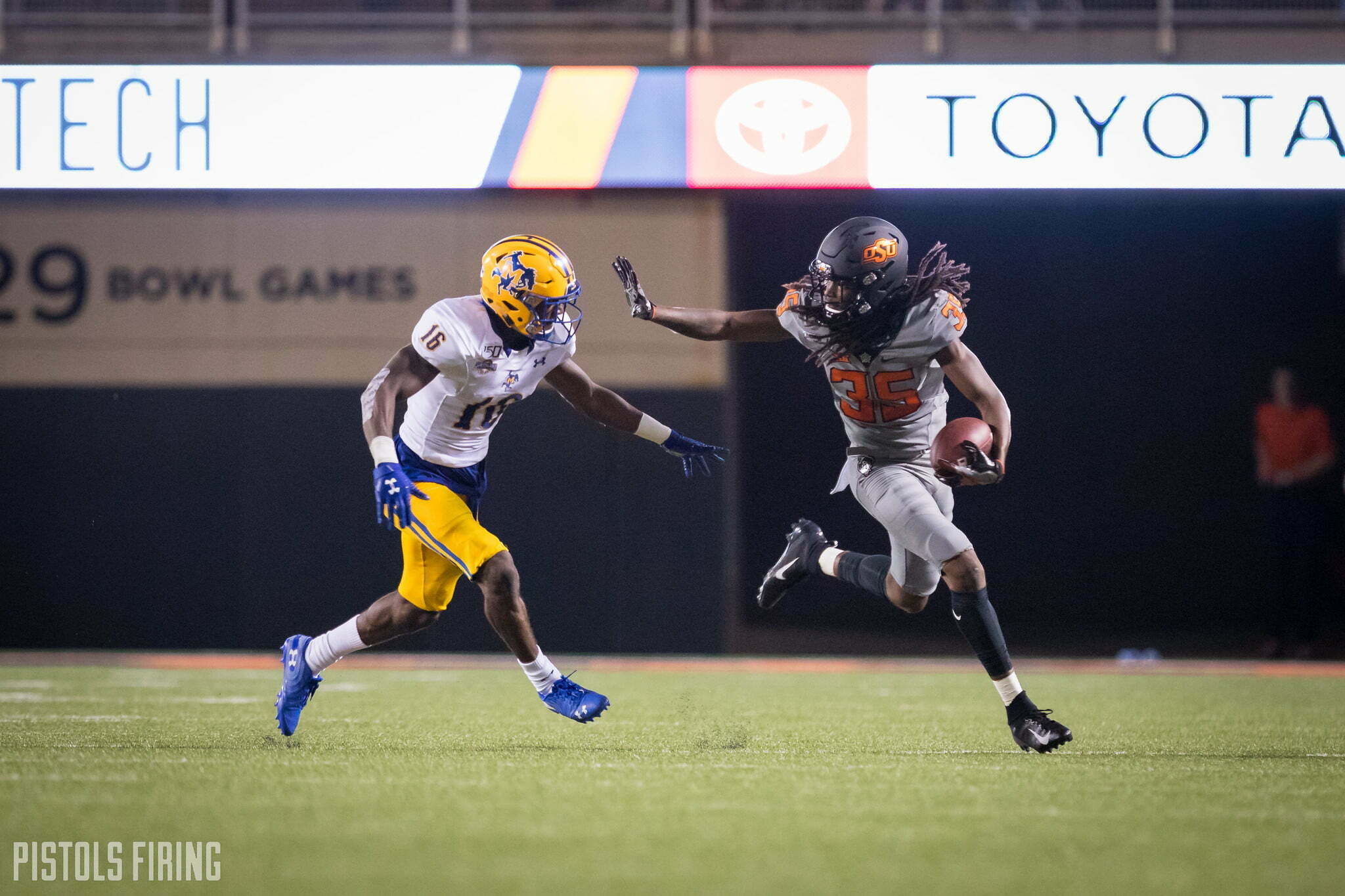 Every program in America is looking for that one player who is dynamic enough to change a game at any time, in one play. Oklahoma State has a handful of them.

It’s probably not a shock to anyone reading this blog but the Cowboys, through two weeks, boast one of the most dynamic deep-threat passing attacks in the country.

When it comes to passing plays of 20 yards or more, Oklahoma State is T-21st with nine through two games. On plays of at least 40, it’s tied for third with five. How about 50? On deep-ball plays that hit the half-century yardage mark, the Cowboys are No. 1 in the nation with four, and all four of those plays contributed to the Cowboys’ home-opening win over McNeese.

On Monday, the question was posed to Mike Gundy whether this was the best group he’s ever had after the catch.

“Weeden’s year, second year, we had a bunch of guys who could catch and run, too,” said Gundy. ‘They were all pretty good. I don’t know who was the best.”

“I know that these guys seem to be doing well with the ball afterwards.”

On OSU’s first offensive score inside BPS this season, Spencer Sanders hit Tylan Wallace on a quick screen. What might have been a first down for a mortal man, became a 69-yard touchdown as Superman showed off his speed.

Then on the first play of the second half Spencer, again, found his man for 75 yards and a score. Once again, faster than a speeding bullet. OSU’s starters were essentially done for the day.

But didn’t mean the fun was over. We got our first real look at Dru Brown and he continued where Spencer left off, finding C.J. Moore. Look at the hesitation the freshman uses to freeze his man. Then it was all long strides and sidelines to pay dirt.

And finally, Brown hit Braydon Johnson for this nice throw and catch and the speedster used his wheels to seal the deal.

Those four pass attempts accounted for 272 yards and four scores, punctuating the big play ability of this offense. Based on my unofficial tally, 220 of those yards came after the receiver had the ball.

Tylan Wallace, last year’s Biletnikoff finalist, is already making his case just two weeks into the season. He’s fifth nationally in receiving yards (272) and his five TD catches is tied for the most nationally.

And a big part of that has been his ability to break open for a huge play.

“He looks faster,” Gundy said with a shrug. “Maybe he’s faster. … The male human body develops up until 27 years old. So, I guess maybe he’s gotten a little stronger, a little faster — it certainly looks that way — I guess only time will tell as the season goes on.”

“I know everybody talks about [Kasey] Dunn being good coach,” Gundy said. “I’m not sure that he was actually involved in that part of it. I think there’s some nature, reflexes and his ability to make a play was probably a big factor in that.”

Gundy mentioned each of the receivers in the above clips as being adept at making a big gain out of what would otherwise be an average one, but he went in-depth on his redshirt freshman.

“Thirty-five, C.J. [Moore] once he gets going, he takes almost one step per 5 yards. And that’s the difference with him. It’s a little deceptive of how fast he is. When you go to watch a high school player and you’re evaluating him, if they’re two steps every 5 yards, they’re gonna be pretty close to a 4.5 [40-yard dash] guy. Anything over that’s lower and anything above that’s slower.

“And he’s almost one step per 5 yards, once he’s going. I don’t know how fast he runs but I know it’s somewhat deceiving because of the strides that he takes.”

I’m not sure if that math checks out but he’s right about that deceiving speed. Moore’s wide gait eats up a ton of yardage and before you know it, he’s 20 yards (or four strides) downfield.

Gundy spoke, in detail, about the growth both physically and mentally that the Tulsa Union standout went through in his first year to be able to make those plays on the field.

What’s more exciting is that C.J.’s still got a ways to grow, which bodes well for WRU moving forward.

“His best years are ahead of him and his ceiling is pretty high,” said Gundy of Moore. “He’s gonna be even stronger at this time next year and even faster and should have another 10 or 12 pounds. He already can leap and has good ball skills. It’s pretty exciting to watch him improve.”

That’s the embarrassment of riches that has become the norm at Oklahoma State. While Mike Gundy’s latest superstar wide receiver makes the headlines, it looks like his successor is preparing for his turn to shine.

That’s the embarrassment of riches that has become the norm at Oklahoma State. While Mike Gundy’s latest superstar wide receiver makes all the headlines, it looks like his successor and several others (?) are readying for their turn to shine.