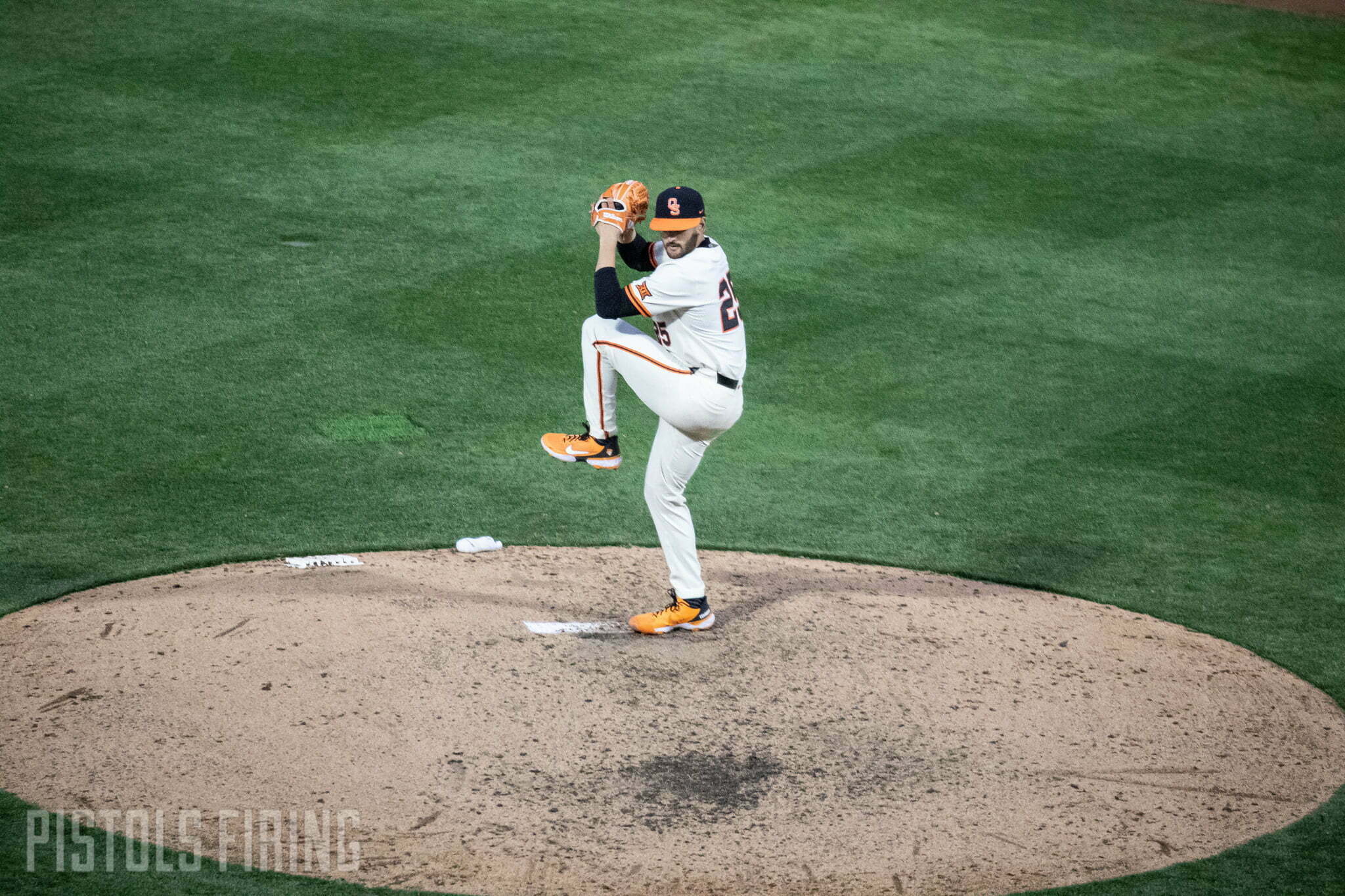 STILLWATER — Griffin Doersching, a man with 48 college home runs, stepped to the plate with a chance to walk-off in his first Bedlam game. Instead, the game ended when Zach Ehrhard got caught trying to steal second.

Oklahoma State fell to Oklahoma 8-7 on Friday night at O’Brate Stadium. Doersching was 2-for-4 on the day with a pair of doubles when he came to the plate as the game-winning run in the bottom of the ninth, but the bat was essentially taken out of his hands. For what it’s worth, Ehrhard appeared to be safe on the steal. It went to a review, but there apparently wasn’t enough there to overturn the original call.

“Hindsight is always right,” OSU coach Josh Holliday said. “It’s my fault. That’s us playing a brand of baseball where he has the greenlight. I might’ve should’ve put the stop sign on right there, but he thought he had a good jump. He’s a good, aggressive player. He’s been stealing bases. We were playing forward – maybe should’ve played in place there for a couple more pitches.

OU took the lead in the top of the ninth, when OSU closer Trevor Martin had another rough stretch against the Sooners.

Martin, a sophomore from Asher, took the mound in that ninth inning with a 7-6 lead. Martin struck out the first batter he faced, but Peyton Graham and Blake Robertson hit back-to-back doubles down the left-field line to tie the game at 7.

Tanner Tredaway fouled out before an intentional walk put runners on first and second with two outs. Sebastian Orduno singled to center, scoring the go-ahead run.

In two Bedlam games this season, Martin has a pair of blown saves. He entered in the ninth inning of the teams’ March 29 game in Tulsa with a 6-5 lead before the game ended with an OU walk-off walk.

“I’m not concerned with Trevor,” Holliday said. “Obviously, emotionally you always care about your players, especially when you know how much they care. If something doesn’t go well for them, you care about them, for sure. So, I’m concerned always for the players and how they’re doing. Am I concerned about his ability to do a great job for us? No.”

Although the umpires appeared to miss a call on the game’s final play with the tag on Ehrhard, the Sooners seemed to be on the raw end of a call earlier in the game.

Caeden Trenkle was momentarily prone in center field after taking a seventh-inning line drive off his chest. With his back to the infield, it was hard to say whether he secured the ball for the final out of the inning. On that play in center, the third-base umpire put a fist in the air, calling the play dead as Sooner runners were rounding the bases. After review, Trenkle didn’t make the sliding catch. Had the play continued, both OU runners would’ve scored. Instead, one was called back to third, meaning OU’s tying run was still 90 feet from home when Orduno grounded into a fielder’s choice to end the frame and preserve OSU’s lead.

For most of the night, the Cowboys seemed to have an answer for OU.

Justin Campbell started on the mound for the Pokes, as is tradition on Friday nights. He threw six innings where he allowed four runs off seven hits while walking two and striking out seven.

Doersching was probably the Cowboys’ best player on the night. Just weeks removed from breaking a bone in his foot, Doersching played in his first Bedlam game and went 2-for-4 with two RBIs and a run scored. Both of his hits were doubles. How good he played made it all the more wondersome that he didn’t get a chance to win the game in the ninth.

“The situation happened the way it did, and I’m not upset about it,” Doersching said. “We like to be aggressive, and that happens. It’s just baseball.”

OSU has now lost to OU on a walk-off walk and a game-ending caught stealing. The Pokes will have two chances at revenge this weekend. Saturday’s game is scheduled to start at 8 p.m. on ESPNU. Sunday’s game will start at 3 p.m. on ESPN+.