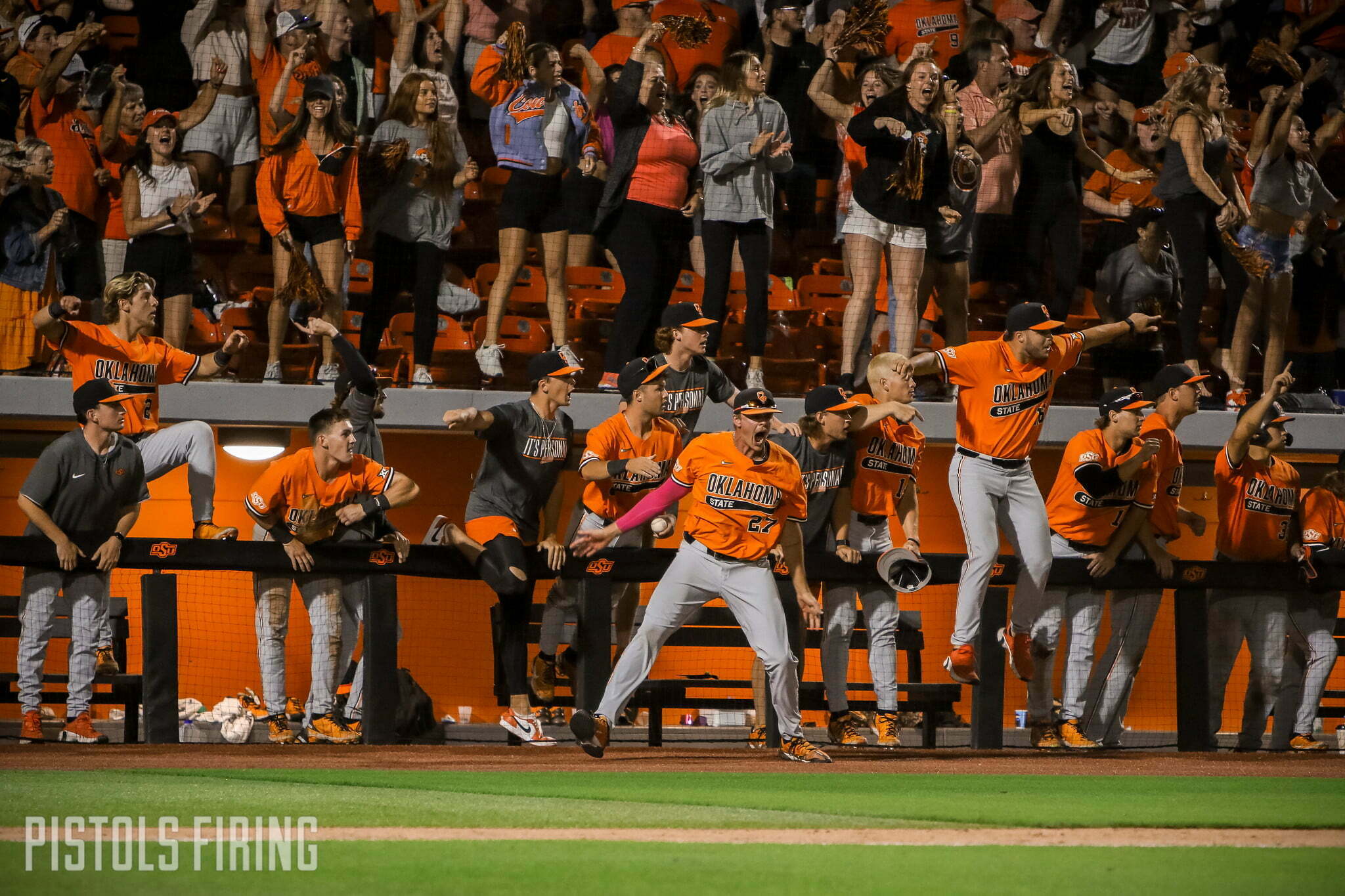 STILLWATER — The Cowboys essentially played 11 straight hours of baseball Sunday just for the opportunity to play more baseball Monday. They’ll get that opportunity.

Oklahoma State defeated Arkansas 14-10 on Sunday night in 10 innings. About nine hours before Caeden Trenkle caught the final out of the game, the Cowboys trailed Missouri State 12-0 before storming back and beating the Bears 29-15. The two wins mean the Cowboys and Razorbacks will play a Regional-deciding game at 6 p.m. Monday at O’Brate Stadium.

The Cowboys took a 9-8 lead in the ninth against Arkansas after David Mendham lined a ball to left. Chris Lanzilli didn’t appear to get a good read on it, as he made an awkward dive attempt, but the ball got past him, allowing Jaxson Crull and Hueston Morrill, who were pinch running for Jake Thompson and Griffin Doersching, to score. Marcus Brown kept the rally going with an RBI single down the right-field line to make the Pokes’ lead 10-8.

But, the Regional that keeps on giving had some more to give. With runners on second and third, Arkansas’ Brady Slavens singled to right off Nolan McLean to tie the game back up, forcing extras.

Roc Riggio, who is white hot in the Regional, started extras with a ground-rule double to right center. Zach Ehrhard, Riggio’s fellow freshman, followed that with a single to left that put Riggio on third. Next up in the order would’ve been Thompson and Doersching, two of the most feared hitters in the Cowboys’ lineup, but because they were pinch ran for, they couldn’t return to the game.

Jaxson Crull struck out, but Ehrhard stole second during his at-bat. Then came Aidan Meola, another freshman. Meola rolled a grounder back up the pitcher’s mound. It ended up looping into shallow center, scoring Riggio and Ehrhard to give the Pokes the lead again at 12-10.

Mendham struck out for the second out of the inning before McLean sent a high fly ball over the left-field foul pole — his sixth home run in his past five games. It was 14-10.

McLean was then tasked with finishing the game again, after failing to do so in the ninth. He walked one in the 10th but forced a trio of flyouts to give the Cowboys another day.

“It never wavered,” McLean said of the team vibe when OSU was down a dozen runs to Missouri State. “Every single one of us had faith in each other, and we knew we were going to pull it out.”

Thin on arms, the Cowboys had two phenomenal pitching performances Sunday. Trevor Martin threw 126 pitches of relief work to steady things in the Missouri State game. That left Mitchell Stone, a fifth-year guy who has spent most of his career battling through injuries, to start the Arkansas game. OSU needed him to go long, and he did. Stone threw six 1/3 innings where he allowed five runs on 11 hits while walking three and striking out seven. It was tied for his longest outing of the season.

Riggio has gone nuclear in his first taste of postseason college baseball — call him Regional Riggio. In the Regional, Riggio has gone 13-for-22 (.591) at the dish with 16 RBIs, four home runs and nine runs scored.

“He was pretty inspirational today,” Holliday said. “He was kind of the vitamin that got the energy going. He was that pill that got us going. Just storming around, his hair was down, and he was letting it all hang out. You saw everything he had in him to play the way he played.”

His offensive outings are the poster for what has been a wild weekend in O’Brate Stadium. There have been 138 runs scored in the six games thus far, 100 of those runs have come in the past three games. Power is all over the place, as well, as 38 home runs have been hit in the Regional.

Doersching, who had crucial home runs in each game Sunday, apparently shared a message in the team group chat last night after the tough loss to the Razorbacks, saying “Let’s just create some memories together,” McLean said. No matter how Monday goes, Sunday was a day everyone in O’Brate will remember.

“That was the single most remarkable effort to just keep going,” Holliday said. “Especially tonight when we had that lead and we let it slip away, we just moved onto the next inning and got [four] runs again. Just an incredible bounce-back-ability these kids are displaying. This is something they’ll never forget, and it’ll always make them know they always have a fighting chance at anything they do no matter how low the odds might seem at the time. I’ve not seen kids fight this hard. It’s remarkable.”

Oklahoma State and Arkansas will do it again at 6 p.m. Monday in O’Brate Stadium. The winner will head to the Super Regional round of the NCAA Tournament.