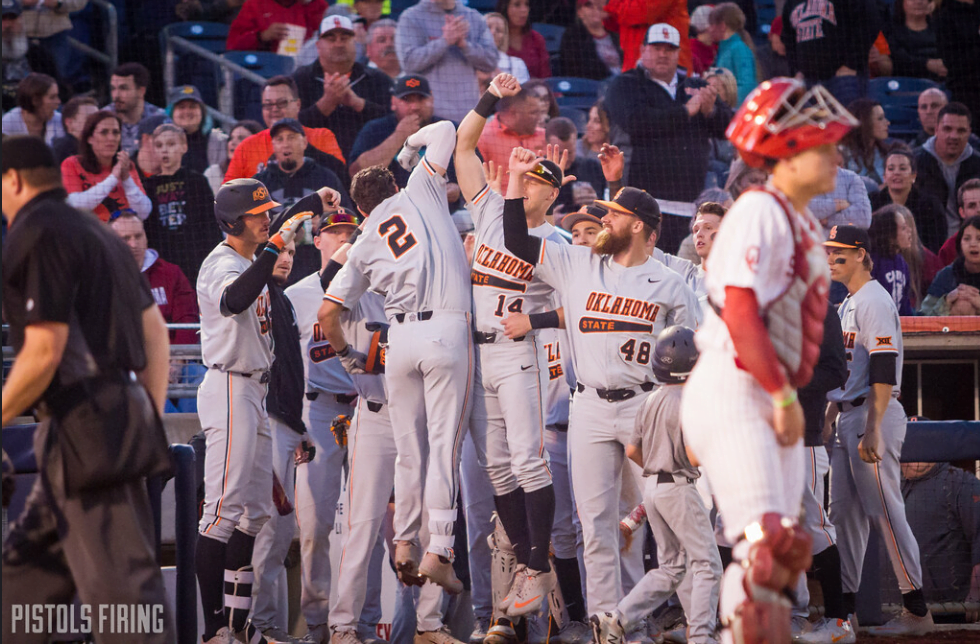 The Oklahoma State baseball team defeated Oklahoma 10-7 on Sunday in Norman to claim the Bedlam series. The Cowboys hit nine total home runs in the series, and home runs accounted for 11 of their 17 total runs.

To no one’s surprise, a home run was the difference Sunday, as Bryce Carter hit a three-run jack in the eighth inning to give the Cowboys their first lead of the day.

Mr. Carter wants the Bedlam lead back, and with one swing @bcarter2582 does just that! 3-run ? breaks tie in T8. #GapBand #GoPokes #okstate pic.twitter.com/NkcorjRyD8

Then in the top of the ninth, Carson McCusker hit a solo shot (with an emphatic bat flip for good measure) to give OSU a 10-6 lead.

It got a little sticky in the bottom of the ninth when Brady Basso hit Diego Muniz before issuing walks to Tanner Tredaway and Brady Lindsly to start the inning. Ben Leeper then came to the mound for the Cowboys. Leeper gave up a sac fly to make it 10-7. Leeper then forced Justin Mitchell to pop up to second, but he walked Brylie Ware to reload the bases. The game ended when Brandon Zaragoza popped out to second, as Leeper was able to get out of a bases-loaded, no-out jam having only given up a run.

OSU’s other home run Sunday came in the top of the second when Cade Cabbiness hit a ball over the right-field wall. Eight of the Cowboys’ nine series home runs went to right with the one outlier being Trevor Boone’s jack to left-center Saturday.

It was a committee approach on the mound for the Cowboys, as starter Brett Standlee threw only two innings. Standlee gave up four runs on five hits before Peyton Battenfield came on in relief. Battenfield lasted three innings, giving up two runs on three hits. From there, Jake Lyons, Basso and Leeper gave up only one run off one hit while walking three and striking out two.

The Cowboys were unable to make it 10 straight victories against the Sooners on Saturday night in Oklahoma City, but 10 of 11 isn’t bad either. OSU has won six of the seven Bedlam series since Josh Holliday has taken over.

Up next, the Cowboys host Baylor in what will be the final series in Allie P. Reynolds Stadium’s history next weekend. The Cowboys still have a shot at claiming a Big 12 championship on the regular season’s final day, but they need some help.

OSU is in third for the time being, but if the Pokes could sweep first-place Baylor and if TCU sweeps second-place Texas Tech that weekend, the Cowboys would celebrate as conference champions on Allie P.’s final day of Big 12 play.