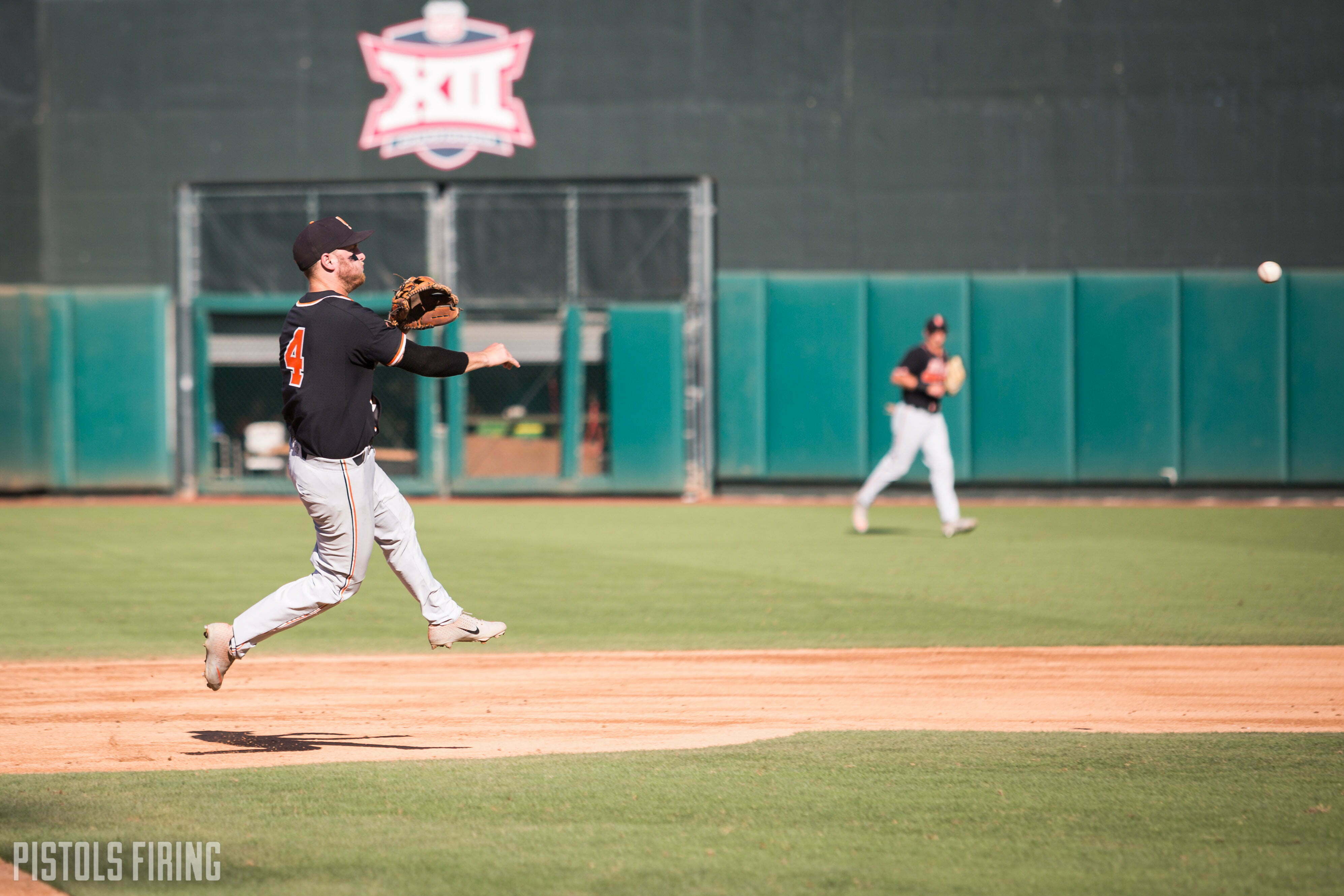 OKLAHOMA CITY — Saturday, the Cowboys were one swing away. Sunday, they swung like it.

The Oklahoma State baseball team fell to UConn 5-2 on Sunday in Bricktown Ballpark, as the Huskies forced a winner-take-all Regional Final on Monday. The OSU bats had a tough go of it against UConn, striking out 17 times, tying a season high. Here are five thoughts from the contest.

Trevor Boone’s two-run bomb covered up a lot of OSU’s offensive blunders Saturday night, but those were on display again Sunday.

In their past two games, OSU has left 19 runners on base and struck out 29 times. The team is undoubtedly a power-hitting squad and strikeouts come with that, but that coin has landed on tails for a majority of the past two nights.

UConn closer Jacob Wallace faced seven OSU batters Sunday night and struck all of them out.

“At times, maybe we tried to do too much,” OSU coach Josh Holliday said. “That’s an internal desire to be successful emotion you feel when you play, but you have to manage it and stay within yourself. Left the strike zone far too often. Maybe some of that had to do with trying to do too much.”

2. UConn Took Advantage of Its Breaks

The Huskies scored three runs on the first two innings and all of those runs were via sacrifice fly.

John Toppa was the Huskies’ first batter of the day. He hit a high fly ball to right field. Cade Cabbiness held his glove between his eyes and the sun and looked to have tracked the ball up until the last second. He flinched as the ball bounced off his leg, and Toppa was standing on second. A deep fly ball to center then moved Toppa to third, and another fly ball to left scored him.

It was more bad breaks for OSU in the second. Christian Fedko dink a ground ball to pitcher Brett Standlee’s left. Standlee couldn’t quite get to it in time, as it grazed off his glove, forcing second baseman Hueston Morrill to track it down, but Fedko got to first safely in that time. After Thad Phillips singled to left, Christian Fedko’s brother, Kyler, hit a ball off the end of his bat that dribbled down the third-base line and no one was able to get to it before Kyler was safe.

Back-to-back sacrifice flies brought in two more UConn runs. It wasn’t that OSU’s defense was playing poorly early, UConn just got a bit of good luck and was good enough to take advantage of it.

After giving up those three early runs, Standlee was able to settle in and give the Cowboys a solid day’s work.

Standlee, a redshirt freshman, threw six and two-thirds innings and seemed to get stronger as the game went on. That was until Anthony Prato hit Standlee’s final pitch of the game over the left-field fence, scoring the game’s final two runs.

“The early part of the game wasn’t as clean as it’s been in the past, but that’s baseball,” Holliday said. “He showed some mental toughness there and really did a good job.”

The long outing could prove vital for the Cowboys in Monday’s game, though, as OSU used only two pitchers Sunday night in Standlee and Logan Gragg. Meanwhile, the Huskies, having also played an extra game, have a much more depleted stable of arms.

“(Standlee) threw the ball good but also pitched deep into the game, and in a tournament setting, he pitched quality innings into the eighth,” Holliday said. “We still have a good, rested assortment heading into tomorrow.”

4. Simpson’s Bat Struggling Since Returning Behind the Plate

Bryce Carter took a foul tip off the mask in OSU’s loss against TCU on May 25, and hasn’t been behind the plate since.

That May 25 game, Simpson had his fifth straight game with a home run. Since, he hasn’t had one, but he has had a fair share of deep fly ball that just didn’t get out of the park.

Power hitters are always going to be somewhat streaky. I also don’t doubt the crouching behind a plate for all of those innings helps the matter, but for now, Simpson is what the Cowboys have.

These two teams will play again at 6 p.m. Monday with their respective seasons on the line.

As mentioned above, fatigue should favor the Cowboys having not had to play the extra game. UConn played twice Sunday, drilling Nebraska 16-1 before beating OSU. That has taken a toll on more than just the Huskies’ arms, though, as UConn coach Jim Penders said leadoff hitter John Toppa cramped to the point of needing an IV. Toppa left the game after the third inning, and Penders said he isn’t sure Toppa will be able to go tomorrow.

Holliday said he wasn’t sure who would start on the mound for OSU on Sunday, but safe money is probably on senior Joe Lienhard. Lienhard has made seven starts this season, but his most recent was a loss to TCU in the Big 12 Tournament.