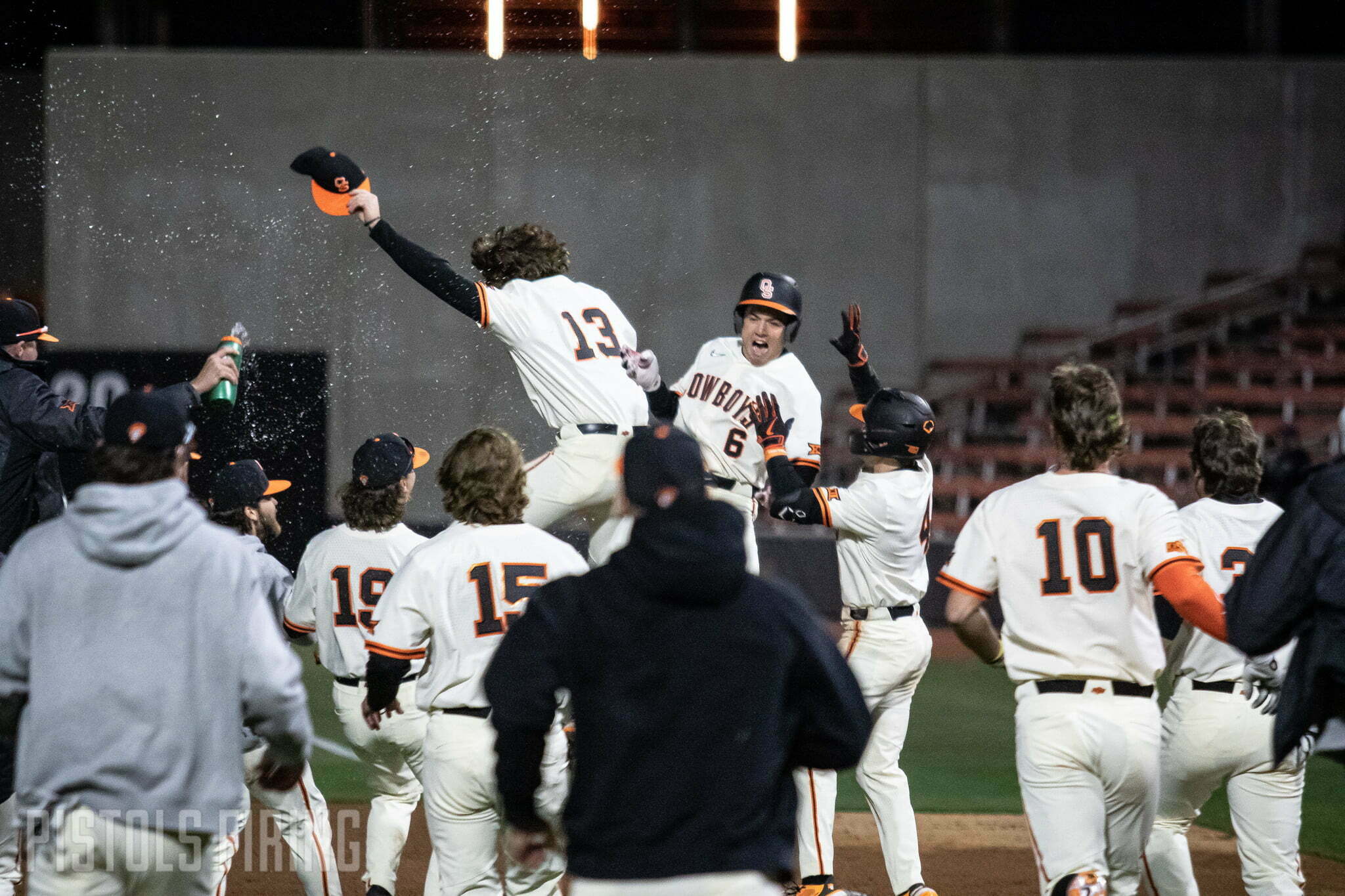 STILLWATER — A win is a win whether it’s by double digits or a single run in extra innings; the Cowboys did it both ways Sunday.

The Oklahoma State baseball team walloped Wright State 26-3 in Game 1 of the teams’ Sunday doubleheader in O’Brate Stadium. Game 2 was a different story with the same ending. The Pokes won 7-6 after true freshman Cayden Brumbaugh hit a walk-off single in the 10th inning, scoring John Bay from second after a fielding error.

The wins pushed the No. 4 Cowboys to 4-2 on the season. Here are a few takeaways from the day.

26 Runs Against a Solid Program

Run rules in college baseball only come if the coaches agree to put one in place. There wasn’t an agreed upon arrangement.

The Cowboys blasted Wright State in Game 1 of Saturday’s doubleheader, winning 26-3. The Pokes scored nine runs in the first and 12 in the seventh.

With the bad weather already canceling one of the series’ games and Wright State bussing down from Dayton, Ohio, the thought was to get as much baseball in as possible.

It’d be easy to look at the opponent and say it’s a total mismatch, but Wright State is a decent squad. The Raiders won the Horizon League regular season and tournament last season, making it to an NCAA Regional. Six of the nine players in Wright State’s Game 1 lineup got a significant amount of at-bats last season.

The Raiders didn’t schedule easy in 2022. They dropped three games to No. 11 Georgia Tech last weekend before heading to Stillwater to face the No. 4 Pokes.

One of the most hyped players of the preseason, Nolan McLean struggled in the Cowboys’ first four games.

After a series against Vanderbilt and a game against Sam Houston, McLean entered the weekend hitting .067, just 1-for-15 at the plate.

The No. 46 prospect in the MLB Draft rankings, McLean had a better day at O’Brate. McLean went 2-for-4 in Game 1 with two RBIs and a solo home run, his first bomb of the season.

He started Game 2 with another RBI, singling down the right-field line to score Roc Riggio. McLean finished that game 1-for-4 with three strikeouts.

A multitool guy, McLean went from third base to the mound in the eighth inning of Game 2. His first two pitches were 96 MPH fastballs. His first outing on the mound this season didn’t exactly go as planned. In one inning, he surrendered a pair of runs off two hits while walking two and striking out two.

“Obviously, Nolan has really high expectations for himself, and we do too because he’s a gifted player,” Holliday said. “I think maybe a little early season over-swinging right now, but I thought today was better. As he relaxes into his swing, he’s a really special talent.

“… I think he’s just maybe seeing the ball and wanting to hit it 800 feet instead of just trying to hit it 400 feet.”

Griffin Doersching has been a rock star for the Pokes this season after transferring in from Northern Kentucky.

The Cowboy first baseman entered the weekend hitting .467 with a team-best four RBIs and four doubles. In the sixth inning of Saturday’s first game, though, Doersching came up hobbled after an unsuccessful slide into third. He subbed out of the game and reemerged in the dugout wearing a walking boot. He didn’t play in Game 2.

After the game, Holliday said there wasn’t an update available.

“I don’t know,” Holliday said. “Not able to play. We’ll see where [Doersching and Hueston Morrill] are at, but the doctors have to take care of those guys. You go with who’s ready and just let them get as healthy as they can.”

The Cowboys head to Arizona for a pair of midweek games against Arizona State at 6 p.m. Tuesday and 2 p.m. Wednesday. OSU hosts Gonzaga next weekend in a three-game series.