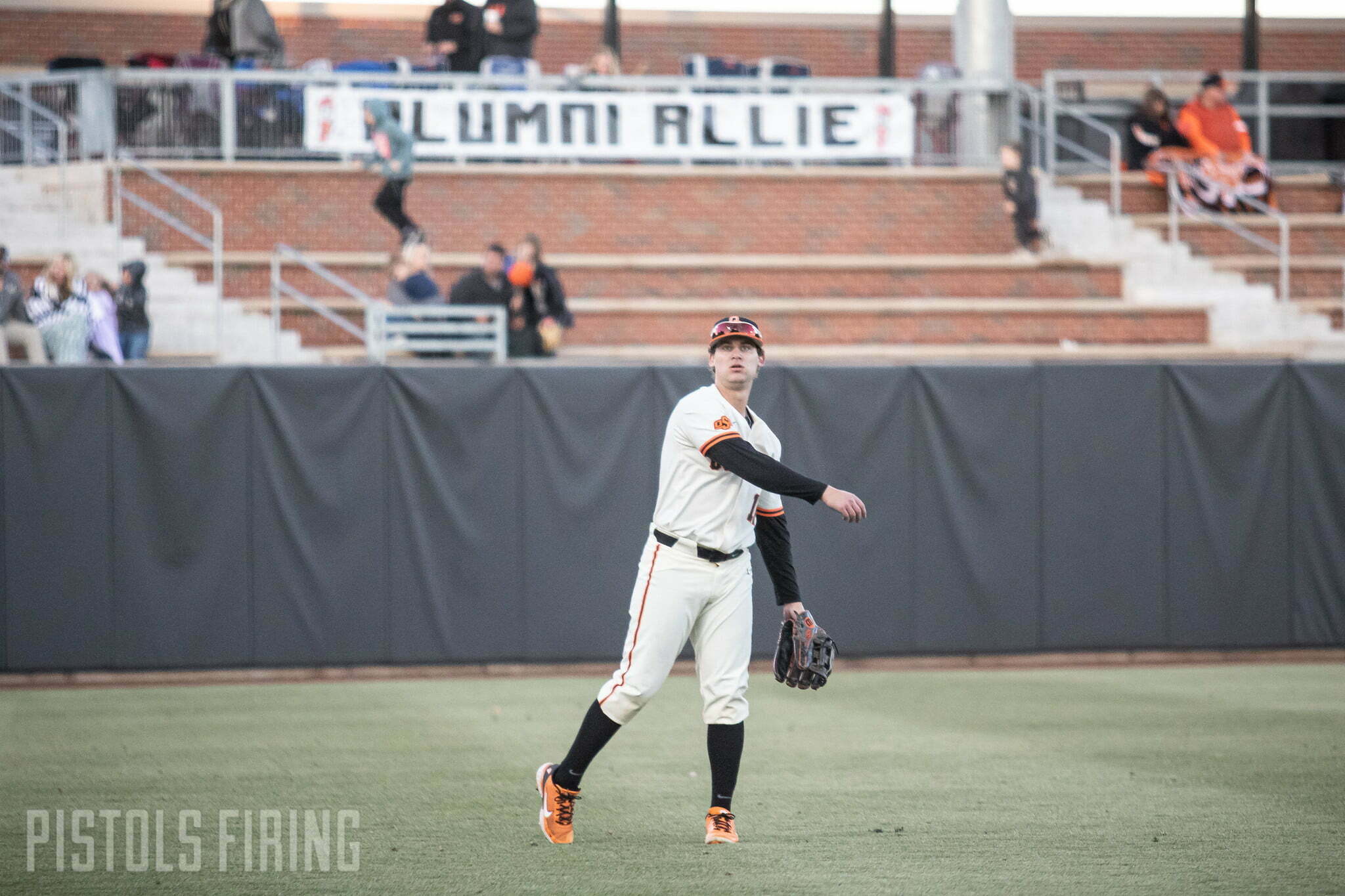 STILLWATER — Make it seven in a row for the Cowboys.

Oklahoma State beat Seton Hall 6-4 on Sunday in O’Brate Stadium to move to 14-6 on the season. It’s the seventh game the Cowboys have won in a row and the fifth in the past five days. Here are a few takeaways from the weekend.

With two outs in a tie game, Jake Thompson did what he has done all season: be clutch.

Thompson crushed a three-run home run 443 feet, all the way out of O’Brate Stadium. It was his third home run in as many days after hitting a 398-foot home run Saturday and a 390-foot bomb Friday. If OSU played again Monday, he might hit a 500-footer. To go with his stretch of long balls, Thompson is also on a six-game hit streak.

“I just made a slight adjustment,” Thompson said. “Early on in the season, I was a little bit lower with my hands and was able to hit singles. I was hitting pretty well, but I wasn’t driving runs in. We weren’t really scoring as many runs as we needed to be to continue winning games and stuff. So, I just made a slight adjustment that I did this summer, had my hands a little higher, then I hit more balls in the air. So, this week right before we started the five-game stretch, I worked on that with the two days we had to practice. I guess it worked pretty well.”

Thompson has been a walking, breathing hot streak as of late. On OSU’s win streak, Thompson has hit .464 with eight runs scored and 14 RBIs. This stretch has bumped his season average up to .410, a team-best among players with at least 20 at-bats. Thompson also leads the team in hits (32), doubles (six), triples (one) and RBIs (21).

“I’ve told people, in my opinion, Jake was the most complete hitter in our conference last year in conference games,” OSU coach Josh Holliday said. “The 24 regular seasons games and whatever we played in the tournament, if you look at those games across all the Big 12 schools, Jake led those games in hitting. To me, that’s really where you see what you’re made of. It’s what you do in those games. So, I think he’s been a really good hitter for quite some time. He was a very good hitter this summer in Cape Cod. So, I think he’s just a fine player.”

Junior middle infielder Hueston Morrill returned from injury and went right into a bit of a hitting streak.

Before Thursday’s season opener against Seton Hall, Morrill hadn’t played since OSU’s game against Sam Houston on Feb. 22, missing 13 of the Cowboys’ games. But in four games against the Pirates this weekend, Morrill went 5-for-15 at the plate, picking up at least one hit in each of the four games.

Morrill has, for the most part, been a staple in the Cowboys’ lineup since being named to the Big 12’s All-Freshman Team in 2019.

“I thought [Morrill’s weekend] was a positive burst of energy for our team, especially with Roc (Riggio) being sick, Aidan (Meola) being sick and Cayden Brumbaugh being sick,” Holliday said. “We were virtually out of players, so I’m glad he came back when he did.”

The Big 12 season kicks off next weekend, as the Cowboys host Kansas (after a Tuesday matchup against Oral Roberts).

Playing a tough nonconference schedule, OSU started the season 7-5, but the Pokes have ramped up into conference play. Confidence could be a big thing for this club as it starts the league grind.

“Winning is fun,” Thompson said. “Everybody in the locker room, it’s so much more fun, the feeling that we have right now after winning and after sweeping. That’s something that you want to stick with you and keep doing. When you’re losing it’s easy to get down on yourself and stuff like that, but when you’re winning, everyone’s up here. You can’t win every game, but we still gotta stay neutral and stay like that and keep having this feeling after games.”

Oklahoma State travels to Tulsa for a game against Oral Roberts at 6 p.m. Tuesday. The Cowboys host Kansas next weekend, with the first game being scheduled for 6 p.m. Friday.