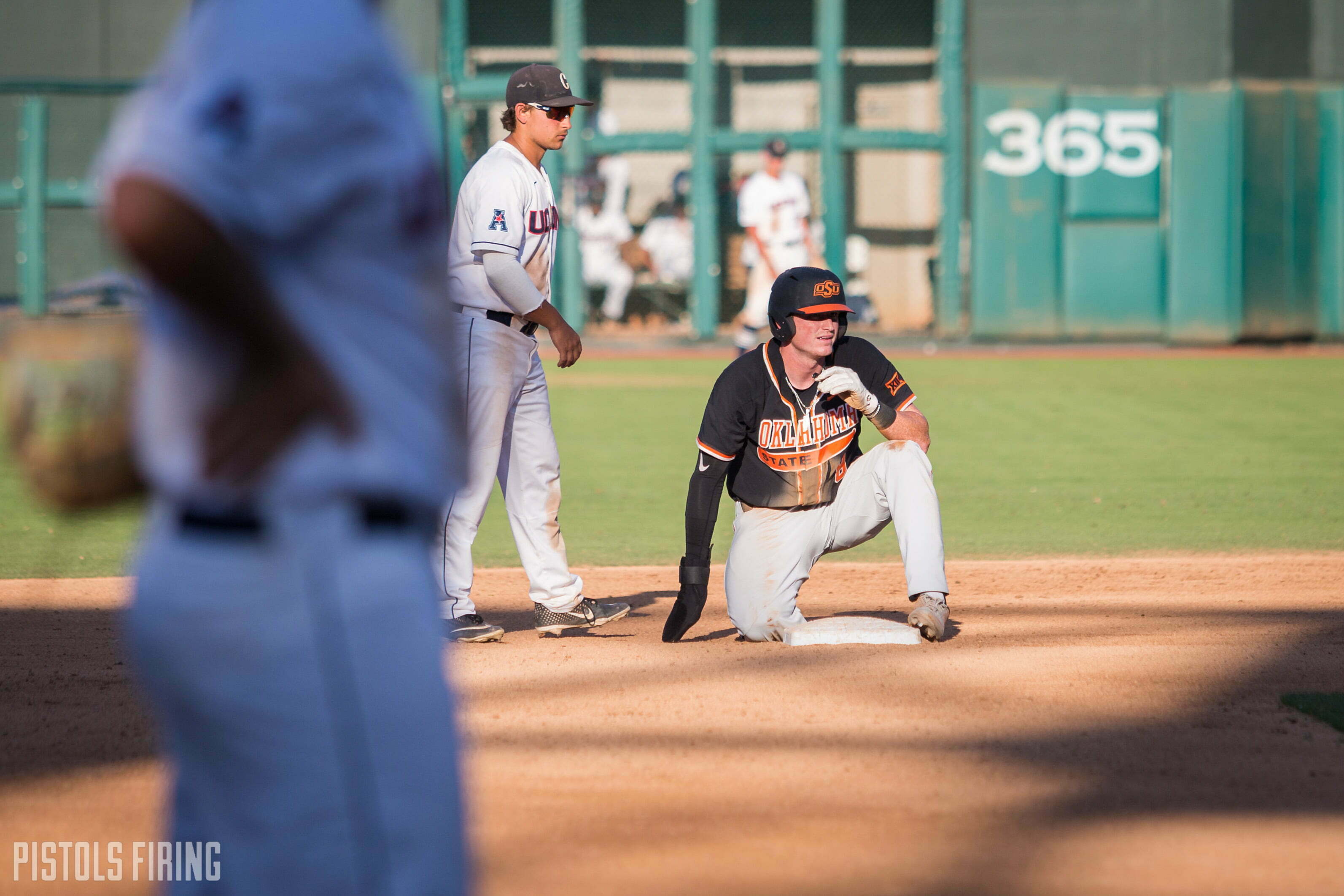 OKLAHOMA CITY — Oklahoma State’s baseball team fell 5-2 to UConn on Sunday night, setting up a winner-take-all game Monday night at 6 p.m. between the Cowboys and Huskies.

The Cowboys gave up three runs in the first two innings but got two back in the top of the third. Things wouldn’t get closer from there, though, as the Huskies would pull away after the seventh inning stretch to force an elimination game. Here are my notes from Sunday’s not-so-enjoyable festivities.

• I always find it comical how specific fan pleas are: “C’mon No. 2 let ‘er rip now, find you a sinking knuckle curveball and drill it to left center in between No. 2 and No. 4, then advance to first and maybe second!”

• Starting pitcher Brett Standlee’s, beard is no beard at all — it’s a bush. I imagine he can hide juice boxes, pine tar, beef jerky all in there without it being detected. Not even mad. Extremely jealous.

• Early innings — UConn scoring three runs in first two innings — played out like a planned date night that was suddenly foiled by both kids coming down with explosive diarrhea. OSU spent the entire game trying to clean up its early mess.

• OSU finally got some hitting from Cabbiness, the nine-hole, and a few hits and a walk later, UConn made its first (of many) pitching changes. Meanwhile, the Chickasaw Bricktown Ballpark made a mood change from ? to ?. Pokes trail 3-2 after rust was shaken out from slow start.

• The uniform matchup is so, so very unfair. If Vegas set lines based on uniforms alone, OSU would have been a ~16.5-run favorite.

• Hueston Morrill shakes off a hit-by-pitch more calmly than I shake off a mosquito bite.

• Matt Howell, 2004 OSU grad, sat in front of me. Friend of the blog. All-time smack-talker. Says he grew up on OSU baseball because football was no good when he was in school. (Shouts to the Donovan Woods-Al Pena depth chart of 2004!) Howell even knew the ump’s name: Ray. Talk about thorough. Fun dude.

• Does Trevor Boone know I’m here? Sometimes Boones have a preternatural sense of other Boones’ presence; it’s a gift. I bet he knows. May explain his off day.

• First strikeout for Brett Standlee came in the bottom of the SIXTH. Then got another right after. I think he found the pine tar tucked away somewhere in his beard.

• Colin Simpson with two warning-trackers. The only player on the roster I think that doesn’t need more weight training is the only one that keeps barely whiffing on going yard.

• Another pitching change for UConn in top of seventh, and this dude throws serious cheddar. 82 MPH breaking ball, 95 MPH heater. Struck out McCusker with two outs and — you guessed it — OSU left another runner stranded.

• UConn’s Anthony Prato with a TAGGED two-run homer — and a bat flip included. The shade. 5-2 bad guys. . . Orange in the stadium starting to fade in sections. Less nervous now, disappointment setting in . . .

• Logan Gragg throws such a nasty curveball, he physically moved UConn’s five-hole hitter. He thought it was coming at his rib cage, and it dropped in for a strike. Dude alert! More of this guy!

• To the top of the ninth we go: UConn 5, OSU 2. Everyone on their feet, including my elderly father, who wanted to leave in 1987 to beat the traffic.

• OSU vs. UConn Monday night in Bricktown for all the cookies.