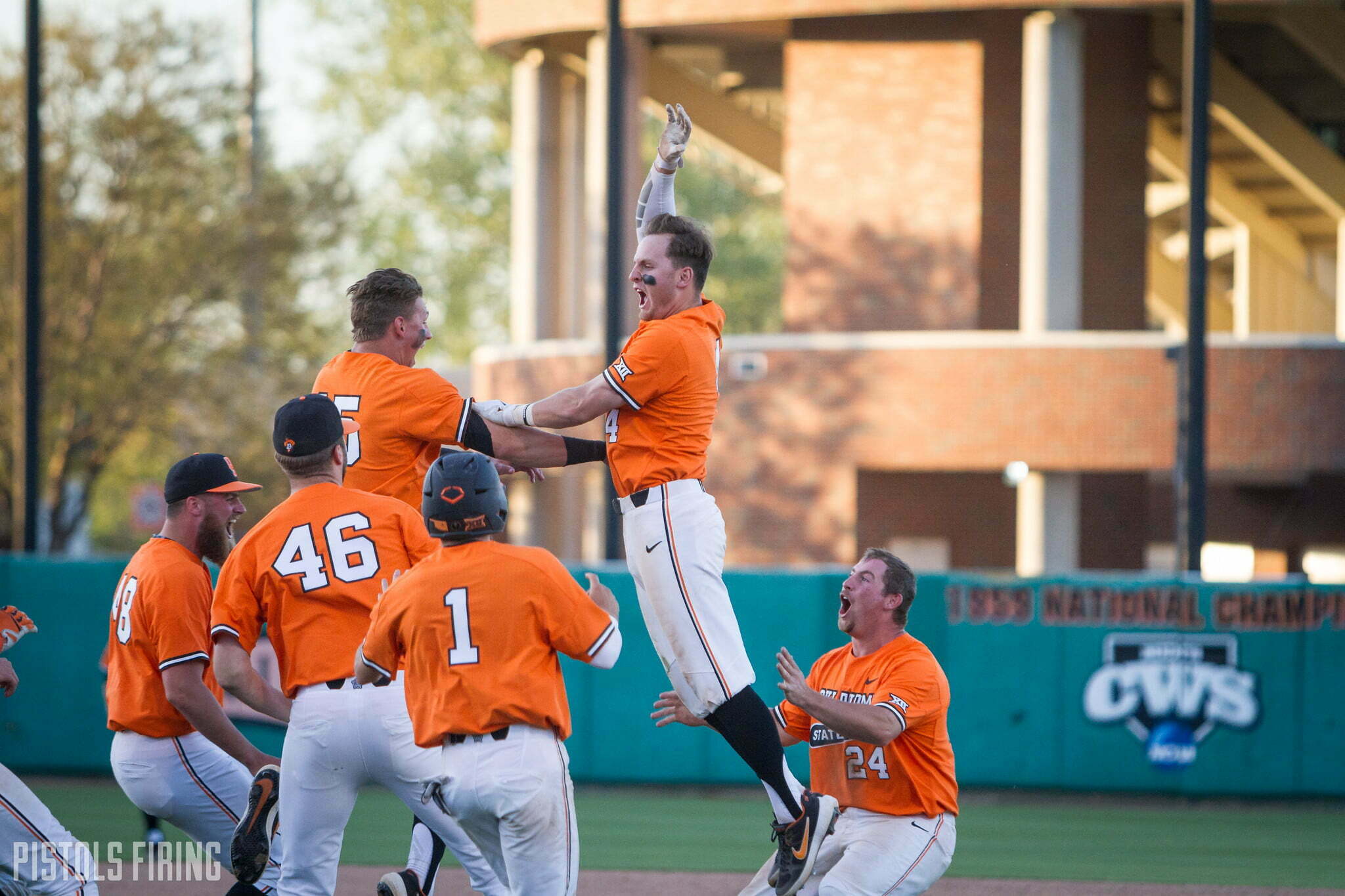 With three conference series to go, the Cowboys are on top.

The Oklahoma State baseball team swept Texas with two dominant performances and a walk-off to sit alone at the top of the Big 12. Texas entered the series ranked 19th in the country, but the Longhorns ended it second from the bottom in the conference standings.

The Cowboys are back in the national polls, as D1Baseball lists OSU at No. 22. The Pokes are 25-13 on the season and 17-7 at home. Here is a look at the Cowboys’ most recent series.

Jensen Elliott and Trevor Boone wrangled Texas on Thursday, as OSU won 15-0. Elliott threw a complete game shutout, where he allowed only one hit and two walks while striking out seven. Boone became the first Cowboy in school history to have three career three-home run games. OSU scored 10 runs in the eighth inning.

Mama there goes that man again! @TrevorBoone_33 makes history as the only #okstate player to ever have three 3-HR games as he blasts his third 💣 of the night. 🤠 #BooneBomb #GapBand #GoPokes pic.twitter.com/tJfpQfBh80

On Friday, the Pokes saw themselves in a similar spot to where they were the weekend before. After drilling Kansas 27-6 in the first game of the teams’ series, OSU dropped the next two games. There was not drop off this weekend, as OSU won Game 2 10-2.

The Cowboys entered the ninth inning with a 10-0 lead off the back of another dominant pitching performance. Parker Scott drew his second start of the season, and he dealt. Scott threw seven scoreless innings. He allowed seven hits, walked one and struck out eight. Through his 20 1/3 innings pitched this season, Scott has a team-best 0.89 ERA.

Carson McCusker was the star at the plate in the second game. McCusker went 4-for-5 with six RBIs. He opened the game’s scoring in the first inning with a two-run double to the gap in right center. He acquired his other four RBIs with one swing, a grand slam to right in the sixth.

Bases FOC… Not anymore! @carson_mccusker delivers a grand slam to double the #okstate lead in B6. 🤠 #GapBand #okstate #GoPokes pic.twitter.com/S1R8kxA3vp

There were finally two teams playing in Allie P. on Saturday.

In what will be looked back at as a classic of the stadium’s final year, OSU defeated Texas 11-10 via walk-off to secure the sweep. The game had a lot going for it. The spring football crowd headed over, making the 4,637 fans in attendance the third most in Allie P.’s history. There were plenty of runs, and a walk-off to boot.

The Longhorns took their first lead of the series in Game 3’s first inning. The Cowboys weren’t able to take a lead until the sixth inning, when Andrew Navigato hit a two-RBI double to the gap in left center to make the game 7-5. The Longhorns retook the lead in the ninth at 10-9.

In the bottom of the ninth, Noah Sifrit tied the game when he scored off a wild pitch. Then with the bases loaded and one out, Navigato singled to center, scoring Hueston Morrill to win the game.

Navigato was 1-for-5 and struck out three times in Game 1. OSU coach Josh Holliday said Navigato was in the batting cages that night, and that extra work showed. In the ensuing two games, Navigato was a combined 5-for-7 with three RBIs, four runs scored and four walks drawn.

Lots of love from @joshhollidayosu for the 4,600+ fans who showed up to Allie P. today, and the #okstate skipper also had high praise for his shortstop following the win over Texas #GoPokes #okstate pic.twitter.com/4pcGmq305j

The Cowboys have a midweek game against Oral Roberts at 6:05 p.m. Tuesday in Stillwater before traveling to Lubbock for a conference series against Texas Tech this weekend. At 8-7 in Big 12 play, the Red Raiders are two games back in the Big 12 standings. The Cowboys are 7-6 in road games this season.