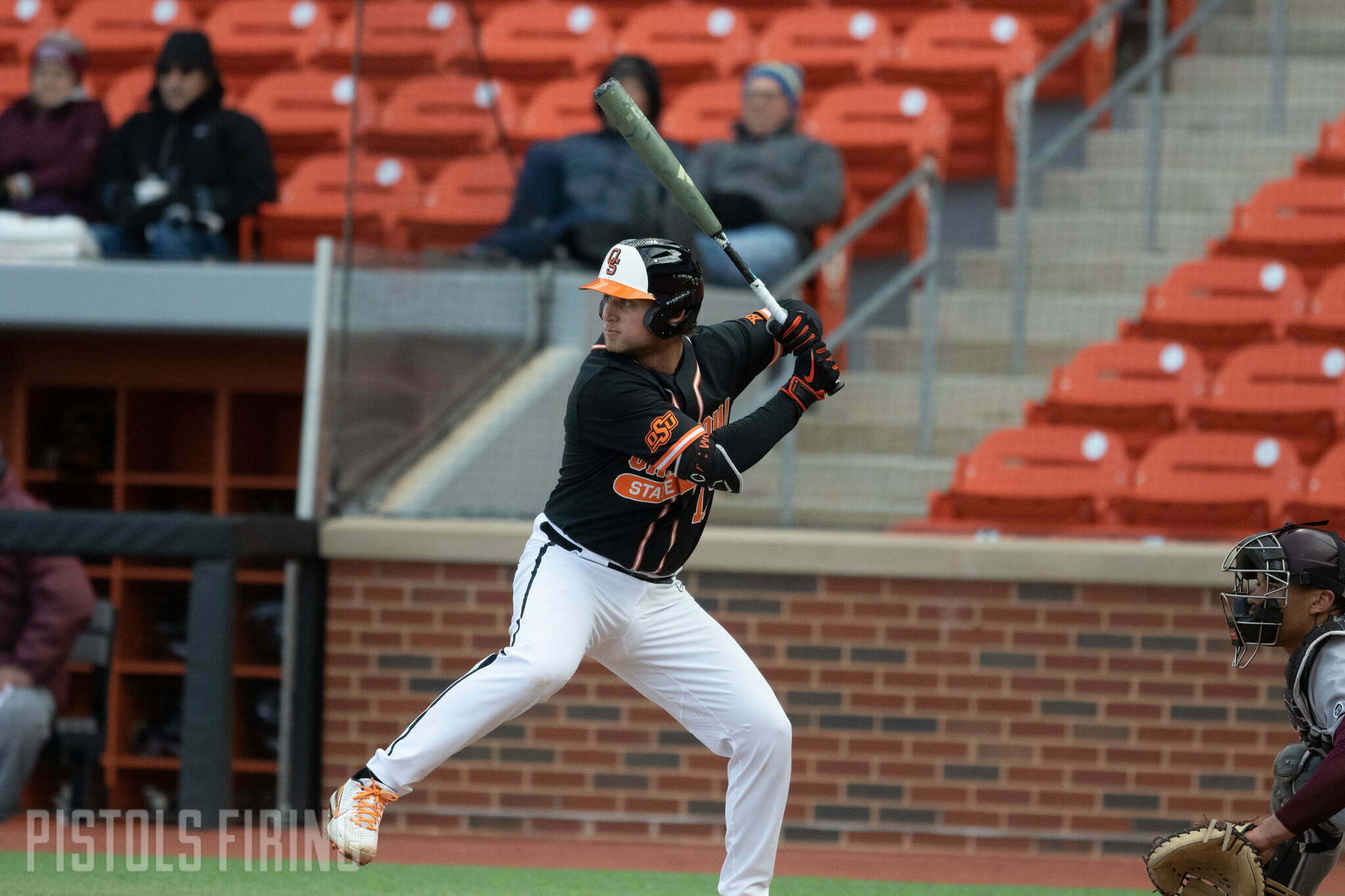 Oklahoma State topped Dallas Baptist 5-4 in O’Brate Stadium in a game that saw Thompson, a super senior outfielder, go 3-for-4 at the plate with four RBIs and a run scored.

Thompson stepped to the plate in the seventh inning with the Cowboys down a run but with two men on. Having already tripled and doubled in the game, Thompson took that seventh-inning at-bat to right center field, scoring Zach Ehrhard and Chase Adkison to give the Cowboys a 5-4 lead. It was an eight-pitch at-bat after Thompson battled from being down 1-2 to a full count.

“In that at-bat, I was just going to make sure I was gonna get that runner from third,” Thompson said. “There was no thought I wasn’t gonna do it. I was pretty confident that I was gonna get it done. He kinda threw me a pitch over the middle of the plate kinda, and I just got on top of it and put it in the gap. So, it was good.”

After the solid day, Thompson’s season batting average bumps up to .403. That leads all Cowboys with at least 20 at-bats. It’s his fifth three-hit game of the season.

Thompson said he has sticky notes with season goals posted on his mirror to hit .400, be the Big 12 Player of the Year and then be an All-American. He is off to a solid start on at least one of those objectives.

The Cowboys’ schedule has been all over the place with weather delays in this early part of the season. It’s made pinning down a starting pitching rotation a little tricky. Entering the week, all three of Bryce Osmond’s appearances had came as starts in weekend series, but Holliday said it was just his turn Wednesday after Osmond didn’t pitch against BYU.

Osmond got in some sticky spots, but had a solid overall outing, throwing six innings were he allowed four runs off six hits while walking three and striking out six. Wednesday was the start of five games in five days for the Pokes, so Osmond working through a few rough patches was big for the bullpen with a quartet of games against Seton Hall upcoming.

Bayden Root was the first player out of Rob Walton’s Bullpen, throwing two innings where he didn’t allow a hit and struck out two before being awarded his second win of the season. Pride of Asher, OK, Trevor Martin closed, throwing two strikeouts in the ninth to get his fifth save of the season.

The win moves OSU to 10-6 on the year. It was Holliday’s 330th win as the Cowboys’ coach, moving him to second behind Gary Ward (953) in program history.