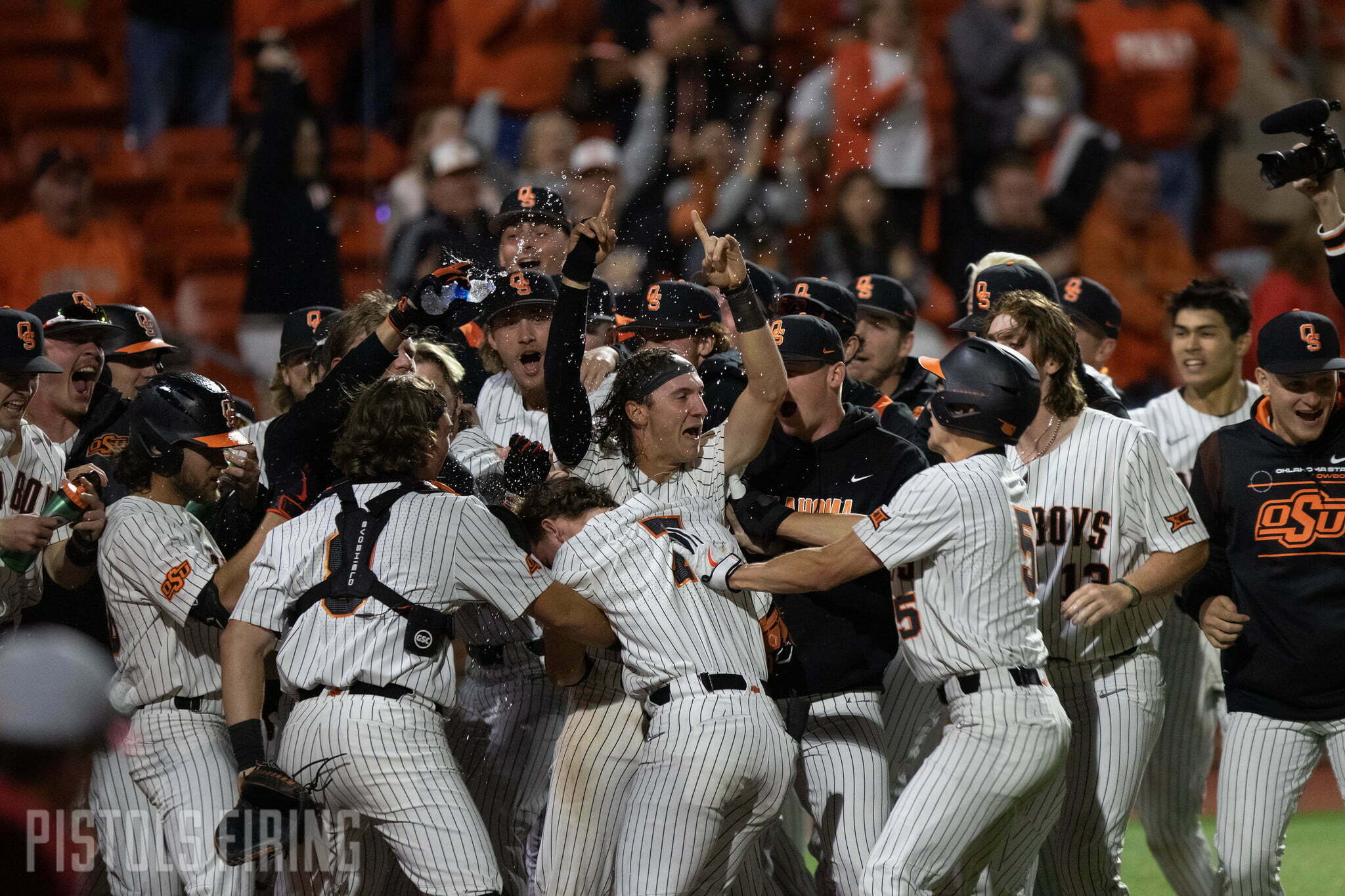 After a walk-off walk and a game-ending steal attempt gone wrong went the Sooners’ way, Oklahoma State beat Oklahoma on a walk-off wild pitch on Saturday night (and Sunday morning) in O’Brate Stadium to win 8-7. The Cowboys overcame a four-run deficit in the final three innings to tie the teams’ conference series heading into Sunday’s rubber match.

Tied in the bottom of the ninth, Marcus Brown got the inning started with a single. Hueston Morrill, who Holliday said is injured, came on as a pinch hitter with one goal: bunt Brown to second. Morrill got to two strikes, meaning a bunt foul would’ve resulted in an out. But, Morrill dribbled a ball down the third-base line and moved Brown over.

Jaxson Crull looped a ball into left field on the next at-bat, but with the outfielders playing up, Brown wasn’t able to get home.

But with the crowd going wild, Trevin Michael threw a ball in the dirt that Jimmy Crooks couldn’t find. Brown darted across home plate, threw his helmet into the infield and the party was on.

Not all wild pitches are created equal. OSU pitcher Ryan Bogusz threw one with a runner on third in the eighth, but his pitch bounced off O’Brate’s brick backstop and right to catcher Chase Adkison. Wallace Clark didn’t even have time to attempt a slide before he was tagged out.

OSU pulled off most of its comeback in the bottom of that eighth inning. Crull was awarded a base on the second catchers interference of the night against OU. Caeden Trenkle doubled in the next at-bat to bring Crull home. Then it was Roc Riggio time.

Riggio, a freshman from California, hit his second home run of the night. He finished the game 3-for-4 with five RBIs and two runs scored. As he crossed home plate after that eighth-inning bomb, Riggio said he blacked out as he clacked helmets with those waiting for him at the plate. The round-tripper tied things at 7.

His first home run was more impressive from a power standpoint. In the first inning, Riggio hit a ball 446 feet to right-center. He admired it as it went, walking halfway to first base. The first-base umpire started trotting toward him to tell him to get a move on.

“The whole other Oklahoma team, they were chirping, they were talking, they were saying everything,” Riggio said. “I was enjoying the moment. I was just soaking it all in. I was firing up our guys. I knew if I watched it for a second, everyone would be fired up, so I did that to keep our guys rolling. I did it for us. And ultimately, we don’t like those guys, so we show off a little bit here and there.”

Despite that ball nearly hitting Stillwater High School, it was just the second-longest home run a Cowboy hit in the game.

Nolan McLean struck out in his first three plate appearances, but at-bat No. 4 ended in a 471-foot home run over the batter’s eye in centerfield.

OSU raced out to a 3-0 lead in the game but a three-run third inning and four-run seventh inning for the Sooners forced the Cowboys to comeback. Four of OU’s runs came with two outs. That was the insult to the injury that the Cowboys struggled with stranding runners early in the game. OSU left 11 runners on in the game, seven of which were in scoring position. Stats like that make it all the more amazing OSU was able to come back and win.

Victor Mederos started on the mound for the Pokes. He threw five innings where he allowed three runs off four hits while walking two and striking out five. OSU’s bullpen struggled behind him. But McLean, who started the day at third base, went to the bump in the ninth and put the Sooners down in order to secure his first win of the season.

The Big 12 Bedlam series will be decided Sunday. First pitch is scheduled for 3 p.m. in O’Brate.