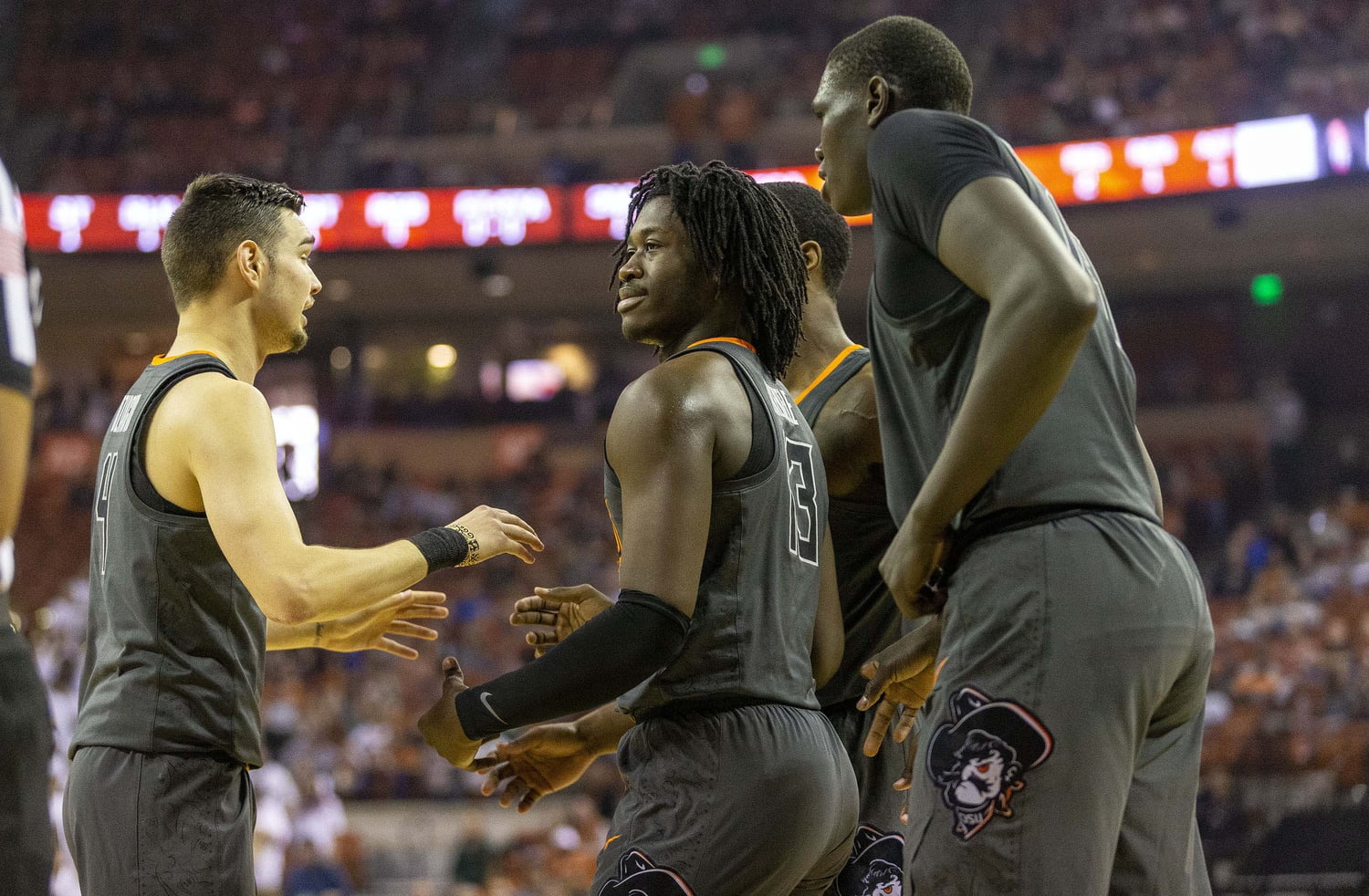 The Cowboys fell to Texas 69-57 in Austin on Saturday, marking OSU’s eighth straight Big 12 defeat. The loss drops the Cowboys 9-16 on the season and 2-10 in conference play.

OSU didn’t get blown out in the way it did against Texas Tech on Wednesday. At one point in the first half, the Cowboys led by seven, only to give up a 10-0 run. The Longhorns strung together a few runs at the end of the half and wouldn’t trail again after the 7:46 mark of the first half.

Recently, teams’ successes against OSU have came from 3-point shots, but Texas took advantage of OSU’s lack of depth. The Longhorns’ bench outscored OSU’s 16-2, and Texas took a 32-20 advantage in the paint, as OSU center Yor Anei had to sit for much of the first half in foul trouble.

Here are five thoughts from another tough day of Big 12 basketball for OSU.

Dziagwa, a junior, scored a career-high 23 points off seven 3-pointers and a pair of free throws. The seven triples tied him for eighth in OSU’s history with 12 others, most recently Phil Forte at Kansas in 2014.

Clark Kellogg struggled with the pronunciation of “Dziagwa” to start the game, but he got a lot of practice.

Dziagwa started the game hot, scoring three 3s in the game’s opening 11 minutes, but he went cold late in the first half with a trio of airballs. Regardless of the late misses, Dziagwa and freshman point guard Isaac Likekele were keeping the Cowboys afloat on the offensive end, scoring a combined 19 of the Pokes’ 27 first half points.

Dziagwa refound his range in the second half, but not much changed in terms of scoring support. Apart from Dziagwa and Likekele, Yor Anei led the Cowboys with six points.

Dziagwa was able to score from various, twisting angles, something he needs to be able to do considering he isn’t great at creating shots.

As good as he was from deep (7-for-11), Dziagwa struggled inside the arc, missing all six of his 2-point field-goal attempts.

That trio played a combined 19 minutes, going 1-for-6 from the field with two points, one rebound and two assists. Already shorthanded, the Cowboys aren’t helped with their starters having to score 96 percent of their points.

Sixth man Curtis Jones played a bench-high 13 minutes where he went 0-for-5 and was 0-for-4 from 3-point range. Jones has proven to be a streaky shooter this season. He has made multiple 3-pointers in four of his 16 games this year. He has made 29 percent of his 77 3-point attempts this season.

For OSU fans who follow recruiting, Isaac Likekele and Courtney Ramey will forever be linked.

The two weren’t exclusively matched up with each other, as Texas runs up to three ball handlers at a time, but they did meet in a decent amount of possessions.

In this next clip. Ramey beats Likekele with a backdoor cut, but Likekele recovers at the rim, denying Ramey and drawing a foul at the other end:

For much of the game Likekele was the Cowboys’ best player. As his teammates struggled to score, Likekele was had a handful of aggressive takes.

OSU stunk at the free-throw line.

The Pokes were 9-for-18 at the stripe, the fifth time this season the Cowboys have shot 50 percent or lower.

Likekele probably struggled the most from the line, making four of his nine attempts, but misses also came from uncharacteristic places. McGriff missed the front end of a 1-and-1, his only attempt of the game. Even Lindy Waters, who entered the day ranked second in the country in free-throw percentage, missed one, going 1-for-2.

Dziagwa, who went 2-for-2, was OSU’s only player to make more than 50 percent of his attempts.

So, what does the team that lacks depth get to do now? Travel back to Stillwater and practice Sunday before hosting TCU on Monday.

Boynton has said ad nauseam in this rough stretch that no team is going to take it easy on them because they lack manpower. That certainly won’t be the case with TCU, who fell to Oklahoma earlier Saturday.

This worn down group of Cowboys showed they have what it takes to beat TCU. Ten days ago, It took a buzzer-beater for the Horned Frogs to take down OSU in Fort Worth.