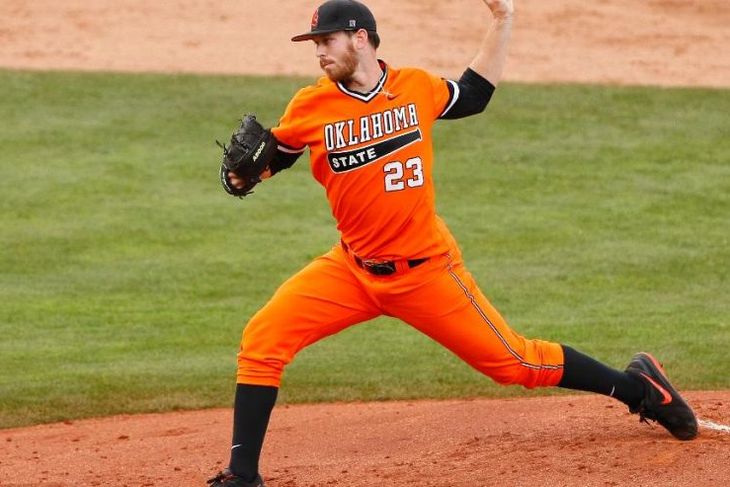 Congrats to the 2015 #Big12BSB Pitcher of the Year, Michael Freeman! #okstate pic.twitter.com/6RLv8HAOoq

Freeman was the runaway favorite after dominating opposing hitters this season. He averaged 8.17 strikeouts per nine innings and held opponents to a .183 batting average. The senior came out of nowhere this season after throwing just 14.1 innings last year. Freeman is the second Cowboy to win this award (Andrew Heaney, 2012).

Along with Freeman, two other Cowboys were named First Team All-Big 12. Gage Green, OSU’s catcher/outfielder/whatever-the-team-needs-him-to-do, was the only Cowboy to start all 51 games this year. He hit .286, leading the team in hits, total bases, hit by pitch and stolen bases. He’s also third in the nation with 17 sacrifice hits. This is the second year in a row Green has been named First Team All-Big 12.

Donnie Walton was a bit of a surprise as First Team All-Big 12 after missing 19 games early in the season. He made up for lost time in his other 32 games, hitting .315 with three home runs and 23 RBIs. He also managed 10 sacrifice hits (third-best on the team), pushing his OSU career record even further out of reach. Walton joins Green in winning this award for a second consecutive year.

Corey Hassel and Tim Arakawa both landed on the Second Team All-Big 12 list. Hassel had a breakout season after being used primarily as a pinch runner and defensive replacement last year. Hassel is hitting .312 with three homers and 30 RBIs, and has committed just one error in the outfield. Tim Arakawa leads the team with 45 runs and 38 walks, while adding nine stolen bases and 35 RBIs. Arakawa is in his final season at OSU, but Hassel has one more year remaining.

OSU had three players on the Honorable Mention list. Trey Cobb led the team with 27 appearances, posting a 2.85 ERA while going 3-1. While most (including myself) expected Cobb to be the closer at the beginning of the season, he’s admirably filled the role Vince Wheeland occupied last year.

Remey Reed is another reliever named as Honorable Mention. He went 3-1 with a 1.48 ERA in 20 appearances, which included five starts. Rounding out the Honorable Mentions is Dustin Williams, who became a mainstay at 1st base this year, hitting .278 with five home runs and 32 RBIs.

Lastly, Jacob Chappell was named to the All-Freshman team after .270 with 30 runs and 12 sacrifice hits. He filled in at shortstop while Walton was injured, and showed a lot of promise for what his future holds at OSU in the next few seasons.

The 10 award winners are one shy of last season’s total, which featured Player of the Year Zach Fish and Coach of the Year Josh Holliday.