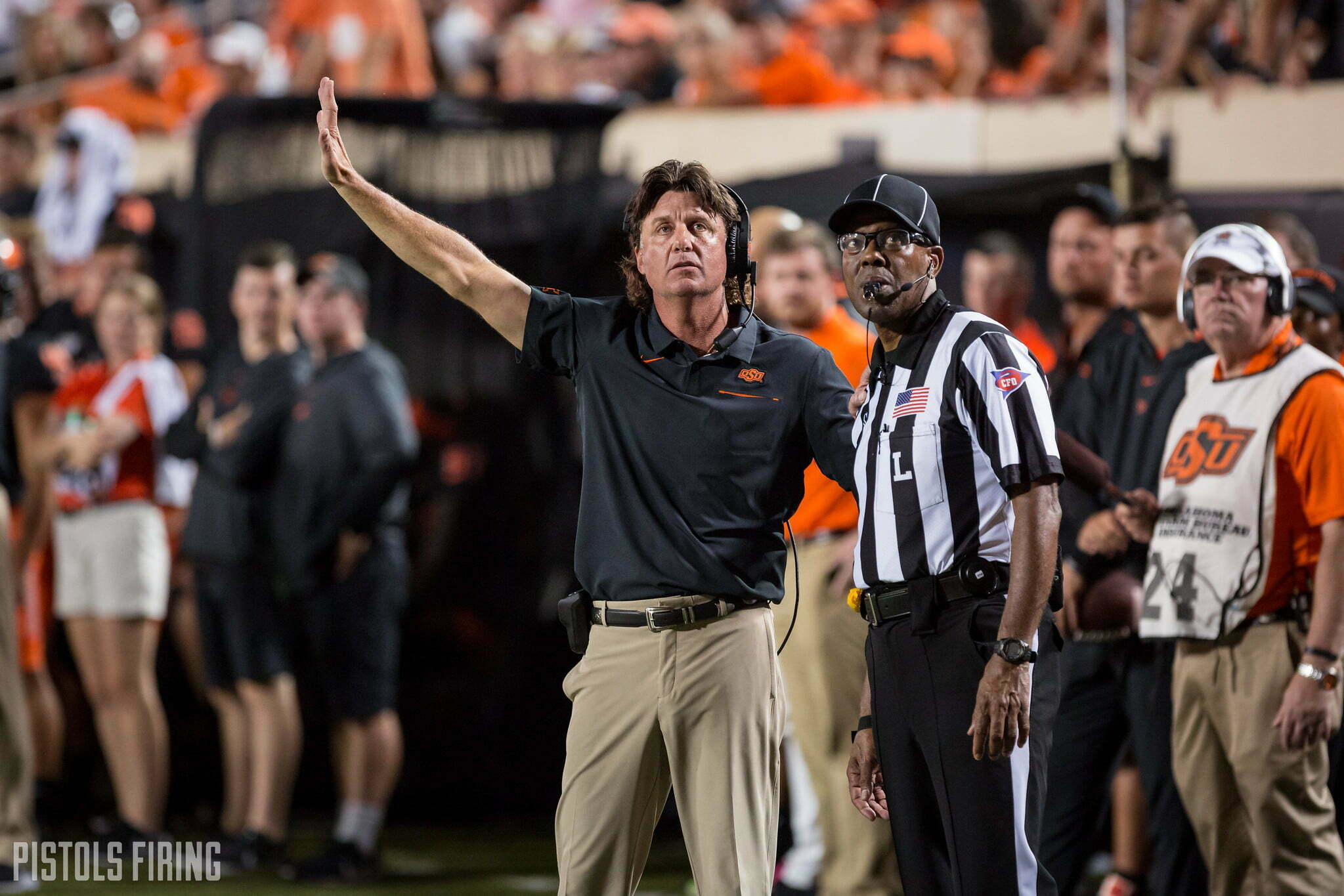 Unbelievably, we are one half of the way through Oklahoma State’s regular football season. In just a short couple of months, the optimistic buzz that comes with 0-0 has given way to the harsh realization that is 4-2. It could be worse, but it could get better.

Let’s recalibrate our expectations for OSU’s 2019 team and forecast the future based on what we’ve learned so far. Here are three things that have occurred to me, the outsider lookin’ in, after watching six games.

1. The O-line is Still a Work in Progress

We saw the impact Charlie Dickey had on OSU’s front in the form of early improvement, but a couple of injuries necessitated a mass shuffling on the front over the last couple of games and production has suffered specifically from a pass protection standpoint.

The Cowboys fielded the same five names that topped its Week 1 OL depth chart in the first four games of the season, but the loss of Teven Jenkins and Dylan Galloway over recent weeks threw things out of wack.

Losing both start tackles would present challenges for any team, but the ensuing shuffling ended in the Texas Tech defense racking up seven sacks, even with the return of Jenkins. The Cowboys’ O-line gave up just six in five games coming in and that seven is one shy the most ever by an OSU opponent.

I still think things are trending in the right direction up front, but Dickey’s work is far from done.

2. Spencer Sanders Has Further to Go Than I Thought (Duh)

I predicted that, following his turnover-filled game against Kansas State, Sanders would bounce back and clean things up against Texas Tech. Boy was I wrong.

But if we believe what Mike Gundy said after the game, and look at recent history, Sanders might just be on schedule in his development. But that doesn’t mean he didn’t earn some critiques. Dustin Ragusa’s film study showed some of the factors (both of his doing and otherwise) that contributes to Sanders’ five-turnover game and the offense’s ineffectiveness.

The point is that he, like the O-line, is a work in progress and that that was probably always going to be the case, whether we wanted to believe it or not.

3. OSU’s Defense is Better Than I Thought

Jim Knowles has somewhat quietly coached his unit up to some pretty solid outings over the last 3-4 games. In fact, you can draw a line straight through the second and third quarters of the Tulsa game and see marked improvement in play and production.

After giving up a wacky 72.4 percent on third downs combined against Oregon State and McNeese (🤢), opponents are only converting 35.4 percent over the last four games. If we narrow that down to the aforementioned intermission in Tulsa, you see a change in between halves. The Golden Hurricane converted 6 of 10 third downs in the first half (60 percent) but only 4 of 11 in the second (36 percent), roughly where OSU has remained since.

Around that same time, we also saw a downtick in points per drive allowed. In just looking at raw, unadjusted points per possession, the Cowboys had allowed over 2 points per drive (2.02 to be exact) through that half in Tulsa, and since have allowed just 1.75. That might not seem like big difference, but when possessions are a premium (they have proven to be lately) and if you plan on getting into any November Big 12 shootouts, that can make the difference in Ws and Ls.

As Kyle Porter is apt to remind us, OSU isn’t forcing enough turnovers to be a “good defense” in this league, at least in order to qualify based on talent level and the way its offense plays. Unfortunately, it looks like those three takeaways in Austin may have been more aberration than indication of a trend. OSU only has six on the year.

The encouraging part is that there are a lot of young defenders throwing their weight around. Six of the Cowboys’ 10 leading tacklers are underclassmen, and the defensive front, especially, has plenty of room to grow before it reaches its ceiling. Several key contributors with multiple years of eligibility remaining have made plays so far, including the likes of Brock Martin, Jayden Jernigan, Israel Antwine, Samuela Tuihalamaka and, of course, the freshman who stole two bases and Mike Gundy’s heart, Trace Ford.

At first watch and in real time, this scary thought filled my head on Saturday: The Cowboys of last year have reared their ugly heads and now get to spend their bye week licking their wounds in the shadow of the Big 12’s real marquee football programs at the Texas State Fair.

OSU is still a second-tier (or maybe third-tier) Big 12 program but there is reason for optimism.

After some time to rewatch and digest some of that ugly game, my stance has softened a bit. Looking over the whole of the Cowboys’ six games, I think there are some distinctions between this year and last. The main one I noticed, which makes me more optimist than pessimist about the future, is healthy dose of mettle.

I saw more fight in the second half in Lubbock, after Tech’s lead reached 20 or more four times, than I can remember in the Kansas State, TCU and Baylor games from last year combined.

Yes, the offensive line needs work and, no, Spencer Sanders isn’t an all-conference caliber QB (at least not yet), but the defense appears to be improving and OSU still has the playmakers it needs to compete with anyone. With a little bit of patience, and after resetting our expectations, this team might just be a fun one to follow down the stretch — as long as Spencer holds onto the ball.