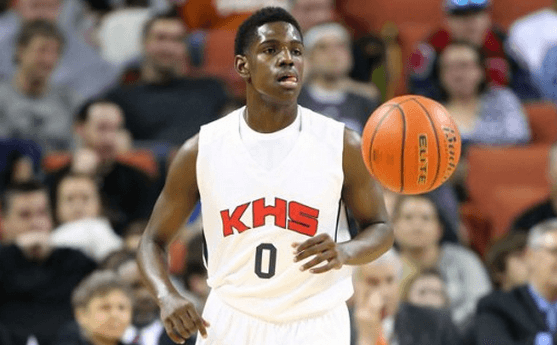 Travis Ford has finally landed his first commitment in the 2015 recruiting class. Jawun Evans has chosen to verbally commit to Oklahoma State over Illinois, USC, Texas, Cincinnati, and Clemson.

Evans is a 6’0, 160 pound point guard from Dallas. He is rated as a 5-star prospect according to 247sports.com, and is a very nice pickup for Travis Ford and company.

Jeff Borzello of CBS Sports said he was supremely impressed by Evans this summer.

Evans was one of my favorite players during the spring and summer AAU and camp circuit. He’s extremely quick with the ball in his hands, and has excellent end-to-end speed. As a result, Evans is very good in transition, and he loves to push the ball up the court for easy baskets and assists.

Considering the two have hinted at playing at the college level together, it may be a sign of great things to come if the duo decided to team up together in Stillwater.

For now though, Cowboy hoops has landed a gem in Jawun Evans. Hopefully Travis Ford can gain some momentum on the recruiting trail after picking up a verbal commitment from the first 5-star prospect since Marcus Smart.