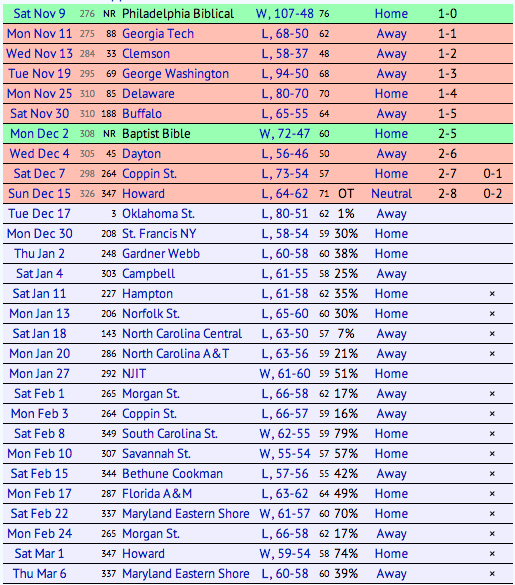 In one of the more hideous first 20 minutes of basketball I’ve ever watched Oklahoma State and Delaware State combined to shoot 16/49 including 2/16 from three in the first half on Tuesday night.

But my patience was rewarded was OSU came out swinging in the second half with six three-pointers, a toxic defense, and 45 points to run away and hide with the big W, 75-43.

Travis Ford got a chance to rest his starters (finally) and mixed in a 10-man rotation as early as 10 minutes left in the first half as OSU’s defense suffocated poor Delaware State throughout. DSU had zero clues on offense.

Ford noted that after the game on Fox Sports Atlantic.

“We need to lead with our defense, it’s been the most consistent thing for us.”

I think if OSU and DSU played 1,000 times in GIA, OSU would win all 1,000. Seriously. I can’t imagine a scenario in which Delaware State would beat this team in GIA.

That’s not really a “hey, our team is better than yours” brag as much as it is an indictment on the excitement level of this game.

• With the super-tight undershirt craze in full swing, I have a question: Who’s the best candidate for a baggy undershirt on this OSU team? The obvious answer is Forte because it seems like the thing a 5’10” shooter should do but I think Brian Williams and Marcus are darkhorses. These are the things you think about during Delaware State games, by the way.

• Speaking of Delaware State, given Ford’s tendency to overhype his opponent, what did he say for this game? “I KNOW THEY’RE 330TH IN KEN POM’S RANKINGS BUT THEY’RE BETTER THAN 21 OTHER TEAMS AND THEY MIGHT BE BETTER THAN TCU!!”

Made me think of Trent Smith's line about "an orange freakin Christmas." #OKState pic.twitter.com/kYbnGLzL9y

• Delaware State’s schedule is a thing of beauty: 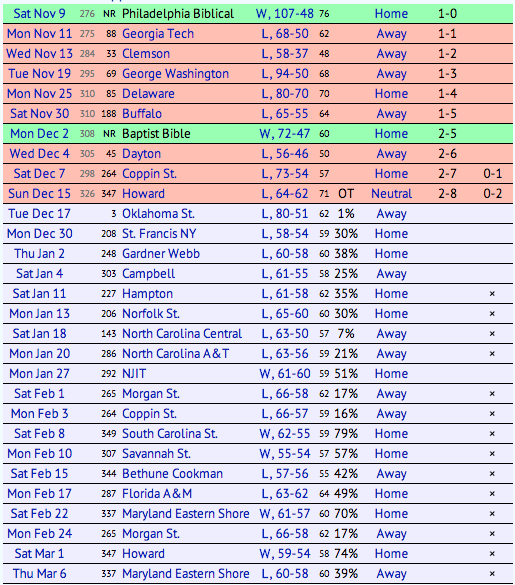 I hear Philadelphia Biblical is wicked at home.

• It was good to see Ford rotating guys who don’t play early on in the game. There’s probably a reason to play Smart 40 minutes in this game but it ends with an email from Boone at 5 AM tomorrow.

• I don’t want to try and take too much away from a game against Delaware State but I like that OSU was 6/23 from three and won by 30. I’d prefer not to shoot 20+ threes, but still.

• “Markel Brown went from being a great athlete to being a very good basketball player” is climbing my “good gosh, are we still talking about this” list.

• I was hoping for a little more exotic mascot than a Hornet from a team called Delaware State, honestly.

• I was watching on an illegal feed that will likely end with my wife being unknowingly betrothed to a Nigerian prince so I don’t have a good clip of it but Markel had a top 10 dunk (or at least I think it was). He flew.

Side note on this: I love it when Markel has to be a little creative (i.e. doesn’t have a fast break all by his lonesome). His best dunk ever was on a bad oop over a dude. This one was a weird angle from outside the lane. Thumbs up.

• Now that Brian Williams did it, two Oklahoma State basketball players have jumped over other humans this year and neither one is Markel.

• Le’Bryan was 6/9 tonight which means he’s now shooting 55 percent (55 percent!) on the season. I’ll reserve judgement on him until we bang out a few conference games but he looks like he finally understands he’s 6’8″ 240 and nobody in the entire state of Delaware can guard him, much less anyone on Delaware State.[1. Copyright @colewayant_ok on that state of Delaware joke.]

• Silly season is almost over, guys. Colorado on Saturday night in Vegas (might want to leave Stevie home for that one, too?) then Bob Morris nine days later on a Monday night. Then conference play. I can’t wait.