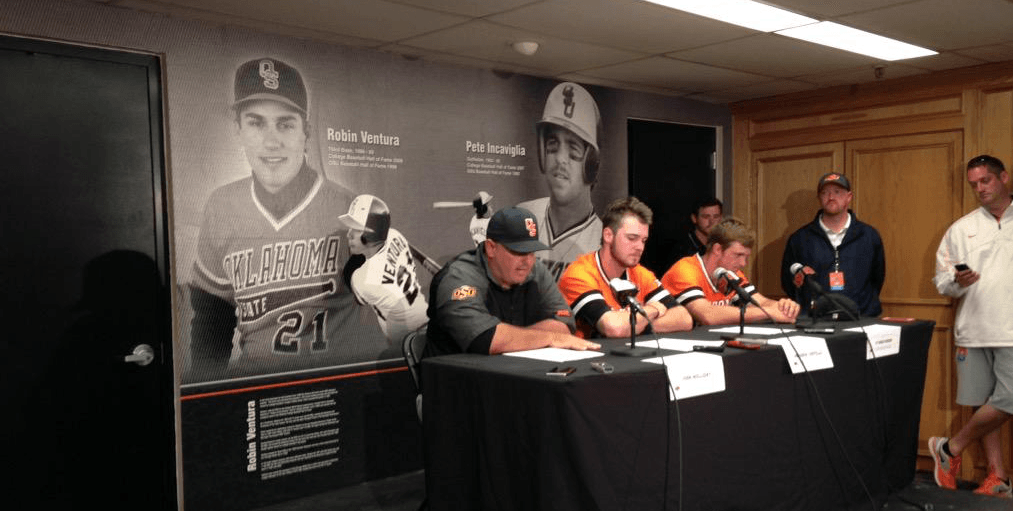 The Oklahoma State Cowboys season reluctantly ended on Sunday with a 2-1 defeat at the hands of the St. John’s Red Storm. The Cowboys failed to live up to the expectations they had as a No. 1 seed and a regional host.

This loss comes as a major disappointment after a loss to Arkansas Saturday night put the Cowboys in a do-or-die situation. Not too many positives in this game, but his throw from Corey Hassel was incredible.

The Cowboys were able to get on the board first when Ryan Sluder scored on a passed ball on a pitch from Red Storm starter Chris Kalicka, the only run that was able to score on the day. Kalicka was not overpowering by any means (0 K’s), but was able to induce 16 flyball outs and kept the Cowboys off balance for the entire game.

I give Kalicka all the credit in the world for the way he pitched in this game, but there was no reason that the Cowboys shouldn’t have hit him. He allowed 33 runs in 54 innings prior to Sunday’s game. If they were facing an All-American and only registered seven hits that would be understandable, but that was far from the case today with Kalicka. The OSU offense just did not show up to play today in a game where it could not afford a terrible performance.

Conor Costello arguably pitched even better than Kalicka. His seven scoreless innings were exactly what the Cowboys needed in this situation and he deserves a ton of credit. Costello also relied on getting weak contact to record his outs (8 FO, 9 GO) and left the game with a 1-0 lead.

“It was a pitchers’ day,” Coach Holliday told the media after the loss. “Pitchers battled. Conor (Costello) pitched outstanding and gave us a fantastic effort. That’s the most he’s thrown in a game this year, and he was really, really special for us.”

Trey Cobb came on in relief of Costello and wasted no time hitting the first batter. Probably not the best way to start an inning that has been killer to the Cowboys in the last four games. Cobb then got an out on a fielder’s choice before allowing Robbie Knightes to steal a base.

I thought Cobb would be able to work out of trouble after a big strike out to get the second out of the inning, I couldn’t have been more wrong. Cobb then gave up consecutive base hits to allow St. John’s to take lead and ultimately win the game.

I really feel for Cobb because he was so reliable for the Cowboys out of the bullpen all season long. He just didn’t have best stuff on a day where he needed to be lockdown.

Overall, the offense did not do enough to advance in this regional. 10 runs in three games is simply not enough to get the job done against the top-level competition that was in Stillwater this weekend.

I honestly believed this team had the potential to go to a College World Series before the regional started. It had a great 1-2 in the rotation, solid bullpen depth, a balanced lineup and was solid defensively. The only one of those observations that held up was the 1 and 2 starters both were solid, Perrin was spectacular and I also thought Freeman had a great outing on the mound (although making plays off the mound was a struggle).

However, the bullpen was shaky at best, the offense was not very reliable and the defensive performance in the regional was completely detrimental. It’s difficult to find a word better than “disappointing” to describe how the season ended for the Cowboys. Luckily, the team only loses eight seniors and I imagine coach Holliday will have his team motivated for the 2016 season.

“It’s hard to grasp the idea that you won’t get to write some of these kids’ names in the lineup again,” Holliday said. “Their legacy, for me, is hard to surmise, especially when I didn’t think I’d be sitting here today. I anticipated this team pushing this thing a little further.”