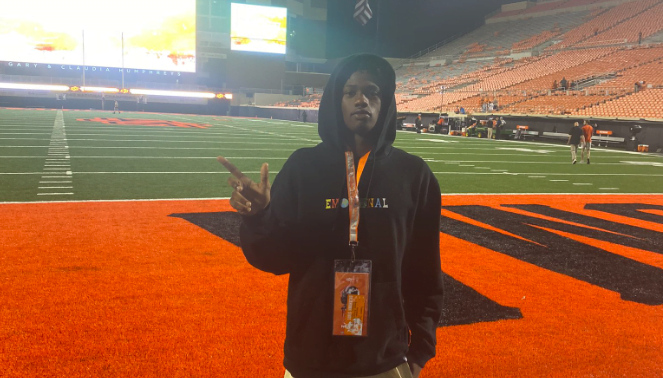 Despite a sour end to Saturday, OSU coaches had no time to feel sorry for themselves. They hit the recruiting trail on Monday, doling out a handful of offers to an elite in-state star, a previously committed speedster from The Boot and a potential impact player from the junior college ranks.

Millwood (Okla.) wideout Jaden Nickens reported an OSU offer Monday night via his Twitter account, and he did so while paying tribute to another Millwood star, former OSU record-setter Rashaun Woods.

Nickens is listed at 6-foot-3 and 190 pounds and he’s just finished his sophomore season. Though he’s already made a name for himself around the state, having been hosted by OSU a couple of times this season as well as Oklahoma. With Missouri also offering Monday Nickens’ offer sheet stands at five with Texas Tech, UTSA and North Texas coming earlier, but he’s a potential superstar and that list will soon be in the double digits.

But Mike Gundy will also have some competition locally for Nickens’ talents.

Nickens is a standout on the hardwood, as well, who garnered an offer from Mike Boynton back in September. He also holds hoops offers from Auburn and Ole Miss and plays on the AAU circuit for Bradley Beal Elite.

While there isn’t much in terms of hoop rankings for the 2025 class as of yet, Nickens is already a five-star football prospect according to 247Sports’ Composite ranking. He is the top-ranked prospect out of Oklahoma, the No. 3 receiver in the nation and the No. 12 overall prospect for 2025. With a Composite score of 0.9928, Nickens be the highest-ranked Cowboy since they started ranking high school athletes. The Cowboys’ highest-rated signee Bobby Reid was a 0.9845. Dez Bryant? A 0.9786.

Stevenson committed to Texas Tech this past summer, but that doesn’t stop teams from throwing their hat in the ring.

Stevenson is a three-star prospect who plays both wide receiver and cornerback. Based on his Twitter mentions, it appears OSU is looking at as the former. He is the No. 47 cornerback in the 2023 class according to 247Sports’ Composite ranking and the No. 19 overall Louisiana prospect.

Much like his namesake who plays for the Buffalo Bills, “Macho” Stevenson is fast. I mean really fast. Stevenson, who also committed to run track for the Red Raiders, recorded the fastest times in the state of Louisiana in Shreveport in the 100 (10.59), 200 (21.51) and 400 (47.18) last year, and won state in the 400, according to the Shreveport Times.

OSU currently only had one cornerback commitment for the 2023 cycle, Braswell (Denton) product Dylan Smith. If we were to sign today, Stevenson would be the fourth-highest commit in the cycle and push OSU’s class ranking up eight spots from 69th to 61st as of writing.

Also on Monday, Oklahoma State offered an under-the-radar in-state junior college prospect who could have a chance to vie for reps next season.

Oates played last season at Northeastern Oklahoma A&M in Miami (Oklahoma). He’s a 6-foot-3, 305-pound defensive tackle who could fill a need up front and vie for reps for the Cowboys next year. He is currently unranked per 247Sports. He also received an offer from SMU on Monday. OSU currently has 11 commits for its 2023 class but none along the interior defensive line.