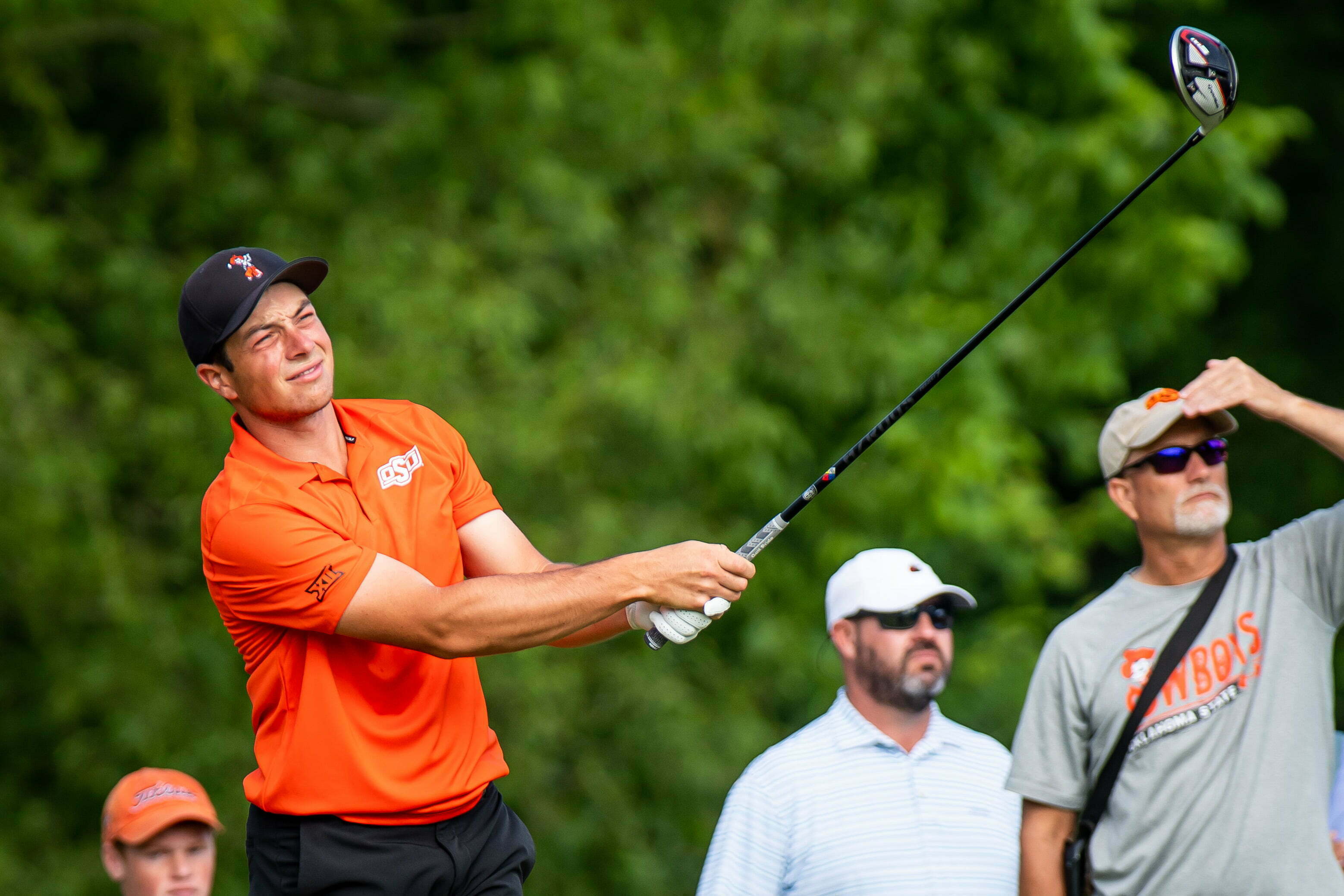 Two things that are true:

1. Oklahoma State is (by far) the best golf team in the country in 2019. If you don’t understand why or how that can possibly be if they’re watching from home on Wednesday, then you either don’t follow golf or didn’t see their 31-stroke romp over the four stroke-play rounds last weekend.

2. Match play is the best way to determine a national champion and also one of the greatest things to ever happen to college golf. If the collateral damage of that format is that Oklahoma State wins fewer titles, then so be it. I know what I watched, and what I watched has one team rival in the sport, and that rival is the Ryder Cup.

Mike Holder sacrificing multiple trophies for the good of the sport overall is maybe the most Mike Holder of all Mike Holder things, and I will ride for it for as long as I cover the sport.

Speaking of the sport, there were actual matches on Tuesday, and Oklahoma State did not come out on the positive side of the ledger. But first, the good stuff.

The Pokes sprinkled water on SMU on Tuesday morning, winning four of their five matches to move on to the semifinals against Texas on Tuesday afternoon.

Those matches against Texas did not start well. Viktor Hovland wrestled with Spencer Soosman from the outset. Hayden Wood took an early lead on Pierceson Coody (real name), which looked promising. The Austin Eckroat-Parker Coody (real name of his brother) score changed six times in eight holes. The score of the Zach Bauchou-Steven Chervony score never got greater than one hole (more on them in a bit). And the Cole Hammer-Matthew Wolff match, well …

Let’s put it this way. Wolff went out in 2-under 34 on a course where the average score in stroke play was greater than 75 … and he trailed by four holes at the turn. That’s because Hammer — the No. 5 amateur in the world, by the way — went out in 30 (and had a putt for 29 on the ninth). Hammer has pured fewer shots in the wildest of his childhood dreams of winning on the PGA Tour, and that match ended after the 15th.

Eckroat took care of one of the Coody Bros., while the other took three of the first five holes from Wood on the back and torched him 5 and 4. Hovland beat Soosman, too, and the last match on the course was Bauchou-Chervony. It highlighted all that’s great about this format, this event and this sport, even if it didn’t go the way any of us wanted it to go.

For a while, it looked promising. Bauchou trailed by a hole after making a six on No. 15, but he rebounded with a par at No. 16 and a bomb at No. 17 to take a 1-up lead to the last. Chervony clipped him with a monster putt of his own, and the drama spilled into extra holes.

Then it went sideways. The coup de grace was maybe the most anticlimactic in NCAA Tournament history. Bauchou missed this short par putt to push the match to a 20th hole and keep OSU’s dream of their first back-to-back titles alive.

Texas will face Stanford on Wednesday despite the fact that OSU beat them by 44 in the stroke-play portion of this tournament. In fact, OSU and Texas played in the same event five times in 2019, and OSU won four of those by a combined 80 strokes. Texas beat them once by six.

There is no evidence that Texas is better than Oklahoma State at golf, but the point of a postseason in which the methodology of determining a winner is artificially shrunk to democratize the competition is what makes all of this so compelling to begin with. It wasn’t built to determine the right champ. It was built to deliver a world-class product.

It has accomplished that.

Still, what this team has accomplished in two years has been astounding. Four first-team All-Americans, two regional titles, a Big 12 title, a national title, maybe the best player in school history and 17 (!) wins, which is more than the previous six years combined.

They might not go down as the best team ever or even the best team to ever roll through Stillwater. But they get a place in the pantheon no matter what the postscript reads. And for two straight seasons and three straight years, they were the best collegiate golf team in the entire country.