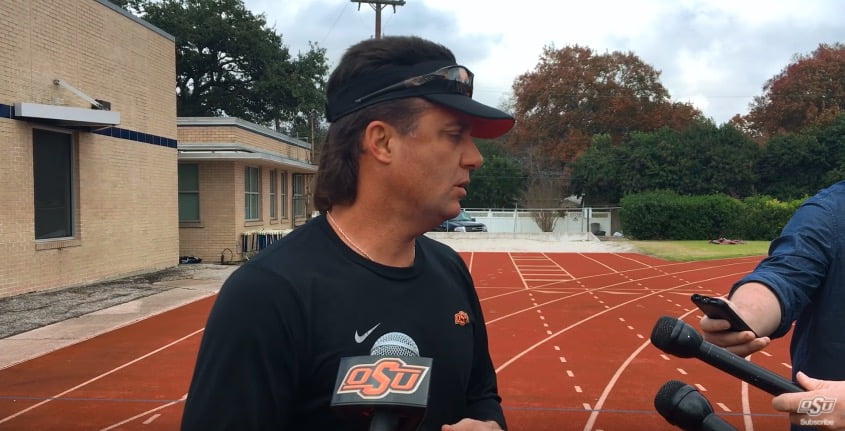 It is strange to me that Oklahoma State has only played one game since the week of Thanksgiving, but it’s true. Now the mullet is flowing, the players are ready and the best non-NYD6 game of the bowl season is on tap on Thursday evening in San Antonio. So how is it coming for Mike Gundy’s Cowboys in San Antonio?

“We had a good practice, it’s always a concern when they’re home for two and a half days to get them re-focused,” said Gundy as the team arrived in San Antonio over the weekend. “We have a fairly mature team and we have enough guys that have played in bowl games that understand the importance of us being here for this hour and 45 minutes. So, I was pleased as were the assistant coaches.

“You know what’s interesting, both teams played in the conference championship game, and I’m sure they wanted to win just as much as we did. And you go through a week or so after you lose what would be a conference championship game, to get the guys back up and going. Our first couple practices, as I shared with local media back home, were pretty average, but since that point the leadership and the chemistry of the team has taken over and they’ve been tremendous.”

They’re going to have to be as they face one of the best teams in the country on Thursday evening. As Kyle Cox pointed out last week, the Buffaloes have one of the better defenses OSU will have faced all season long.

“They’ve got old school corners, zero coverage, pressure adjusted to a three-down recently,” added Gundy. “They have tied that into that system that had been around for a long time before. They’re very stingy, allowing 20.8 points per game. Their nose guard is hard to move. (Linebacker Jimmie Gilbert) is a terrific pass rusher. Their safeties tackle. They’re going to force you to try to throw passes by squeezing the run and making it difficult for you to try to get yardage on the ground.”

“They’re very aggressive and very athletic at the same time,” added offensive coordinator Mike Yurcich. “They’re very good in the secondary. It’s experienced and talented. They have the ability to rush the passer very well. They’re a challenge for us because they match up well against us, against the pass. It’ll be a tremendous challenge. They’re a senior-laden defensive unit, so they have experience and understand their schemes very well. Their technique is very sound, so it will be a challenge for us.”

Yes it will. But with a win, OSU will likely vault into the end-of-the-year top 10 and garner some momentum going into a 2017 in which its offense will be one of the best in the country.