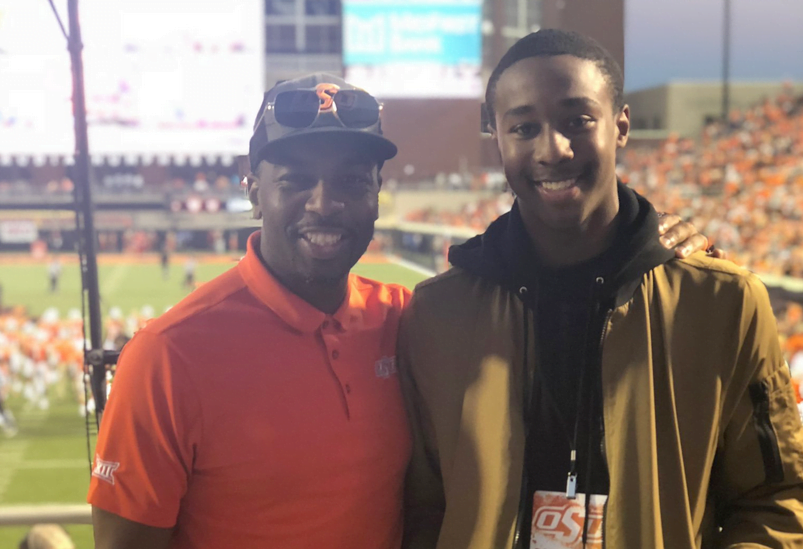 Thompson posted a photo recapping the visit on Wednesday morning with the caption that reads: “Great in home visit with @thacoachmike !! #GoPokes”

Featured prominently in the photo is Thompson, Boynton, Thompson’s father Rod and the rest of his family. And oh yeah, Boynton’s sporting a cool blazer with kicks as white and fresh as powdered snow.

OSU already holds one commitment in 2020 from four-star point guard Davonte Davis, but Thompson is a combo guard who, at 6-foot-5, projects more as a shooting guard at the next level. (Put another way: OSU is definitely making room for him in 2020 if he wants it to happen).

“I like him a lot,” Thompson told PFB last spring about Mike Boynton, who has made him a priority in 2020. “He’s a player’s coach. He likes my versatility. He thinks I could be a combo guard at the next level.”

Thompson has nearly a dozen offers including from OU, Kansas, Texas A&M, OSU and Colorado, but OSU sits in a decent spot with his recruitment for now. Not only has OSU recruited well to make the program an enticing landing spot, but it has recruited Thompson’s teammates: Kalib and Keylan Boone, two AAU teammates of his, are primed to land on campus this summer.

All the eye emojis!

Boynton’s persistence in recruiting has paid off for him with more than one recruit since he took over the gig and it will be a huge coup if, after a nearly two-year-long recruitment, he’s able to land the highest-rated prospect in the state for 2020.