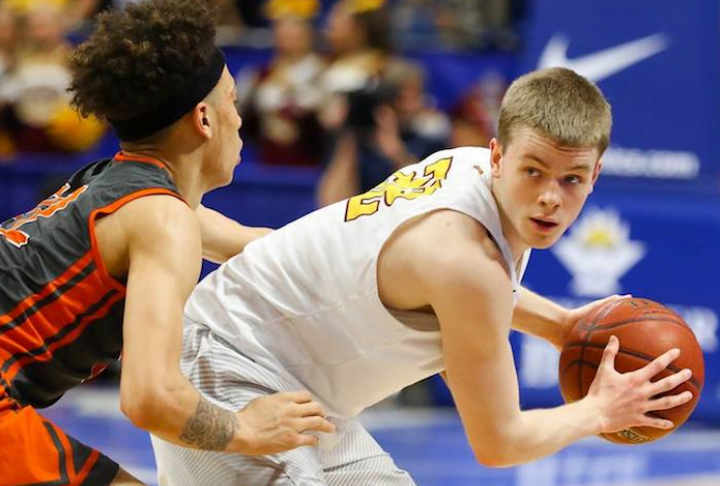 Junior college transfer Sean McNeil, one of the most prolific scorers at his playing level regardless of classification, was offered by Oklahoma State’s staff this week.

McNeil is a 2019 recruit from Sinclair Community College.

A sharpshooter who plays shooting guard at Sinclair, he’s averaging 30.0 points per game through 27 games. His shooting numbers are staggering, too: 49.4 percent from the field, 42.1 percent from 3, and he’s grabbing 6.2 rebounds per game.

At one point this season McNeil was the leading player among all junior college ranks — Division I, Division II or Division III — in scoring when he was hoisting 35 points per game. He even dropped a 55-point game.

McNeil is listed at 6-4, 190 pounds, and has a rather interesting backstory. He committed to play at Bellarmine University in 2017, a Divison II school in Louisville, on a basketball scholarship but abruptly left after deciding college wasn’t for him. He then enrolled at a community college that didn’t offer basketball, and was subsequently recruited to play at Sinclair.

McNeil’s stock has steadily risen since. Ole Miss, OSU, Missouri and Texas Tech have all offered over the last week, and Colorado State, West Virginia and Dayton are after him, too.

OSU’s roster is slim at the shooting guard position, and will only get thinner after next season, when Thomas Dziagwa and Lindy Waters II are expected to expire their eligibility (both are juniors this season). Looking ahead, McNeil would be an excellent long-term investment who could take one of the remaining scholarships for 2019 and potentially make an early impact as a sharpshooter next season.