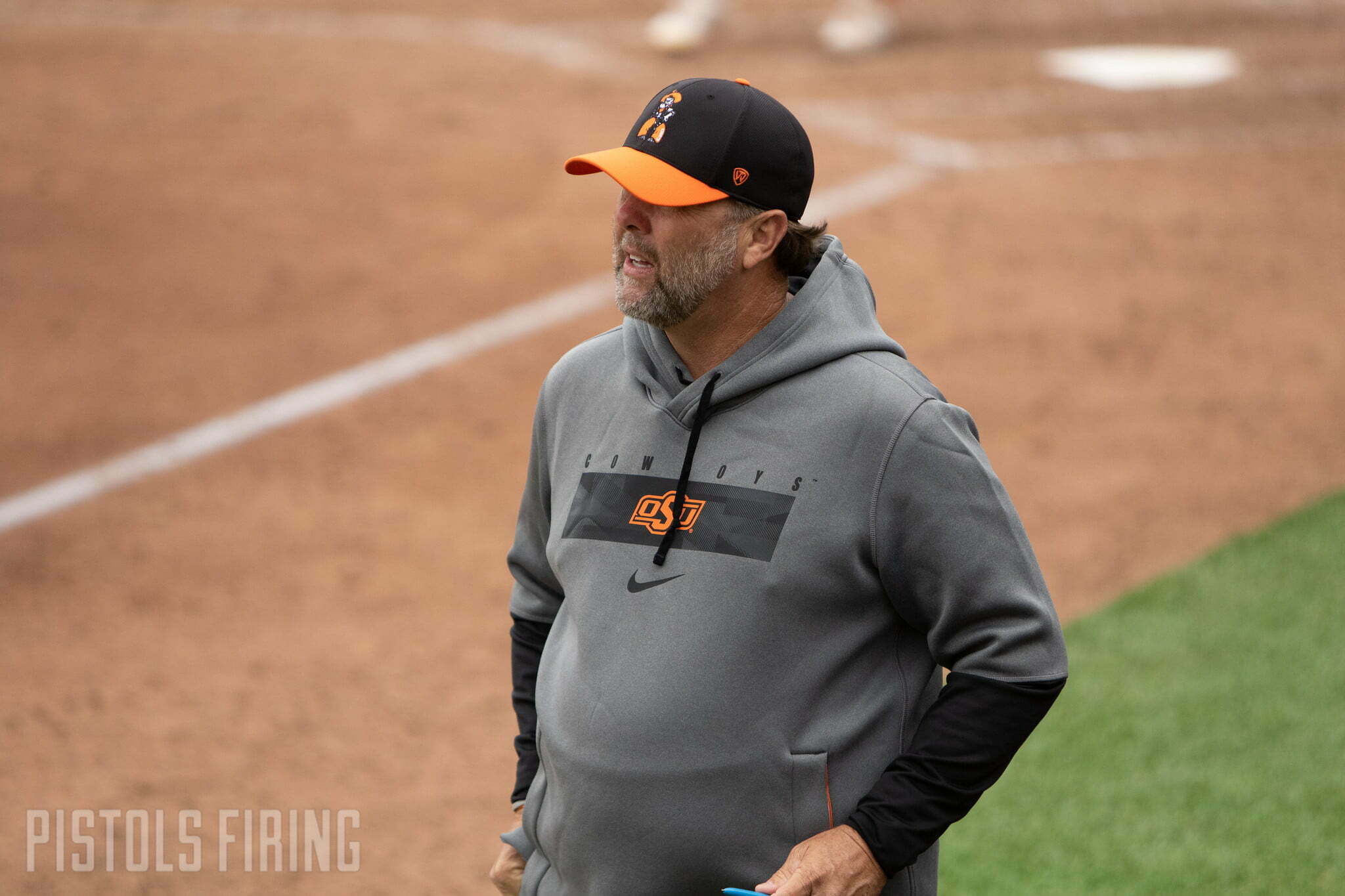 NORMAN — There was a bit of déjà vu at the OU Softball Complex on Friday night.

Oklahoma State fell to top-ranked OU 6-0, securing the Sooners’ 10th straight Big 12 title. Like with Thursday’s game, OU busted the game open in the bottom of the third inning, and the Sooners’ scoring spree was spearheaded by a defensive miscue.

OU had runners on second and third with no outs when Tiare Jennings hit a ball to Kiley Naomi at short. Naomi fielded the ball and went home, trying to get Jayda Coleman out at the plate. Coleman put the brakes on and started running back to third, where Jocelyn Alo was standing after advancing from second. Coleman slid into the bag and was tagged, but Alo started running back to second. OSU catcher Julia Cottrill pump faked around but didn’t throw anywhere, loading the bases with no outs.

“The correct play is the catcher should veer, run at an angle, so when the second runner takes off, you can just tag her or flip the ball,” OSU coach Kenny Gajewski said. “We didn’t do that right. It just is what it is. Julia is new here. We do work on it a lot, but it just goes to show you what pressure situations do.”

OU’s only other run came in the fifth when Grace Lyons hit the first pitch of the frame over the bleachers in left field.

The Cowgirls came closest to scoring in the fifth inning. Chelsea Alexander and Naomi drew consecutive two-out walks. Katelynn Carwile then hit a 3-1 pitch into shallow right field. Trying to manufacture a run, Gajewski sent Alexander home from second, but Rylie Boone threw Alexander out at the plate.

The Cowgirls also got a pair of runners on in the seventh off a pair of walks before a Naomi flyout ended the game.

Morgan Day threw a complete game for the Cowgirls. In the six innings OSU played the field, Day gave up the six runs off seven OU hits. She walked three and struck out four.

After the Cowgirls didn’t walk at all Thursday night, five OSU batters walked Friday. Hope Trautwein got the start in the circle for OU. In five 1/3 innings, she didn’t allow a run, giving up three hits while walking three and striking out four. Jordy Bahl, who threw a complete game Thursday, came on in the middle of the sixth. She threw one 2/3 innings where she didn’t allow a run or a hit while walking two and striking out two.

Gajewski said the plan is to pitch Kelly Maxwell in the series finale. Although the Cowgirls don’t have a conference title to play for anymore, they would still like to find a way to win Saturday’s game in hopes of being able to host a Super Regional at Cowgirl Stadium.

“We’re trying to host a Super,” Gajewski said. “I don’t think there’s any question we’re hosting a regional. You gotta beat these Top 10 teams, Top 5 teams. Those are big marks on your RPI. Playing these guys and Florida State last week, this is why you play these games because they don’t hurt you. They only help you in the way the committee looks at all this. We just gotta figure out a way to bounce back and play a clean game.”