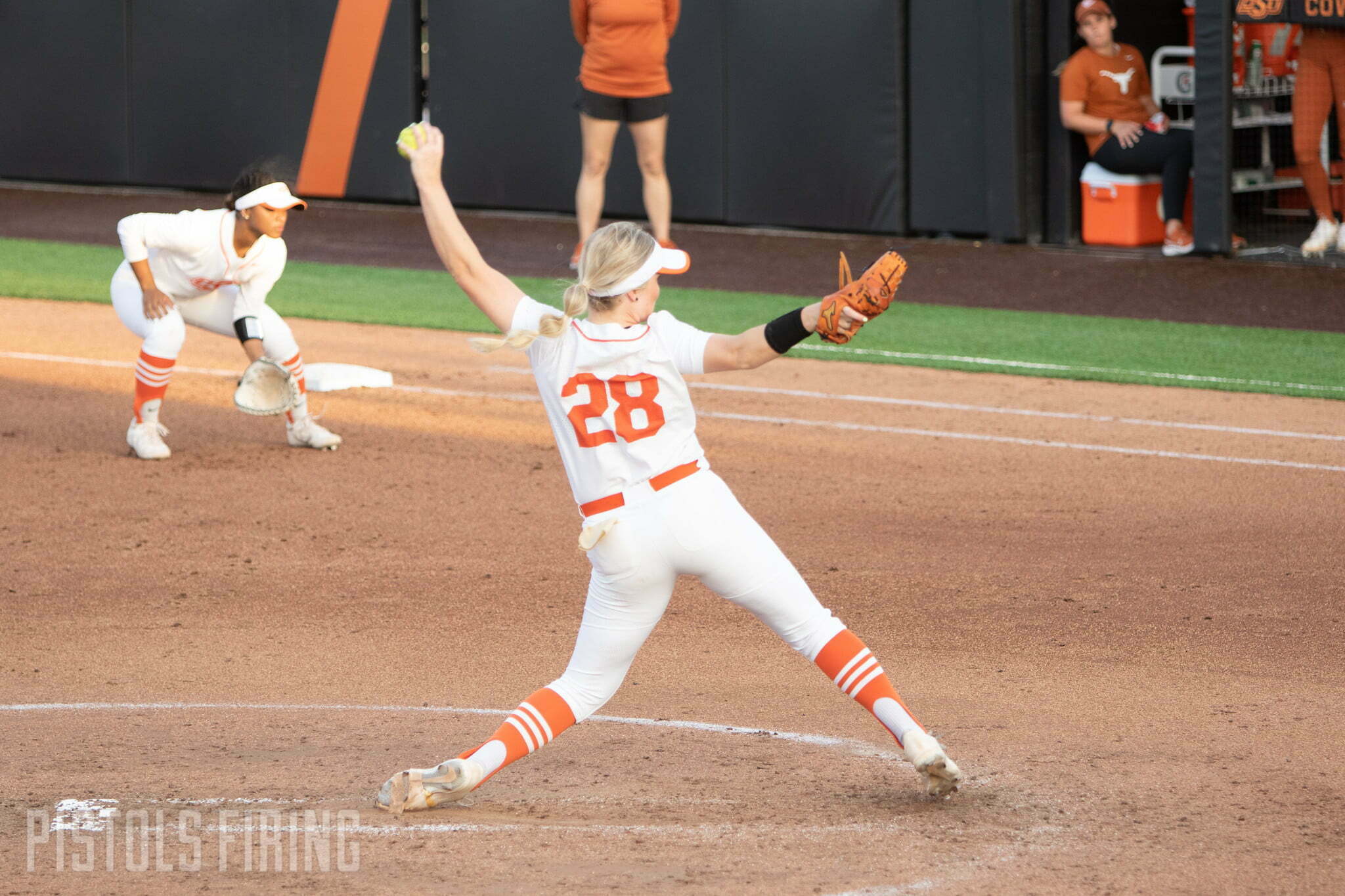 NORMAN — Leave the Sooners an out and they’ll take seven runs.

The top-ranked Sooners defeated Oklahoma State softball 7-1 Thursday in a series that will decide the Big 12’s regular season champion. All seven of the Sooners runs came with two outs.

“It’s just those little things,” OSU coach Kenny Gajewski said. “You can’t give these teams those type of opportunities and expect to win these types of games.”

Base runners were sparce through the game’s first three innings, but the Cowgirls gave OU a glimmer of daylight, and OU took advantage.

From there, the Sooners put together a two-out rally that started with Jayda Coleman singling up the middle. Jocelyn Alo then singled to the gap in left center, scoring Johns. Then with runners on the corners, Tiare Jennings hit a three-run home run to right center. From a missed double-play opportunity to down four runs.

The Sooners added two more in the fifth. OU loaded the bases with no outs. Kelly Maxwell was able to get the first two outs of the inning without letting a run score before two consecutive bases-loaded walks added to OU’s lead.

“They only had seven hits, but I don’t know if we walked,” Gajewski said. “They walked six times. If you give the walks and the free chances and all the things, it’s just too much to overcome against them.”

The Cowgirls lone run came in the fifth inning. Chyenne Factor hit a one-out single before Chelsea Alexander came on as a pinch runner. Alexander moved to second on a wild pitch. Sydney Pennington then ripped a ball at third base. It bounced off the bag into left field, and Alexander turned on the jets to score from second.

But OU got that run back in the bottom of the frame. Grace Lyons walked before Lynnsie Elam grounded a ball to Kiley Naomi at short. Naomi got a little ahead of her self trying to turn a play and dropped the ball. A groundout moved the runners to second and third before Elam crossed the plate on a wild pitch.

Maxwell fell to 15-3 on the season after throwing 138 pitches in six innings. She allowed the seven runs (five earned) off six hits while walking six and striking out four.

“I think if you asked her, she’d tell you she wasn’t very sharp, and we didn’t help her,” Gajewski said. “They hit some balls hard tonight. We don’t see that against her very often.”

Gajewski said Morgan Day will get the start in the circle during Friday’s game. Miranda Elish is dealing with a bicep injury. Gajewski listed her as “day-to-day.”

“We’ll see how [Elish] bounces back here today,” Gajewski said. “She threw a little bit, so we’ll she how she bounces back. It’s just day-to-day. Yesterday was a bad day. Here today, it was a little bit better day. It’s just kind of the nature of the beast.”

It was a dominant performance from OU ace Jordy Bahl. Bahl allowed the one run off four hits while striking out six and not giving up a walk.