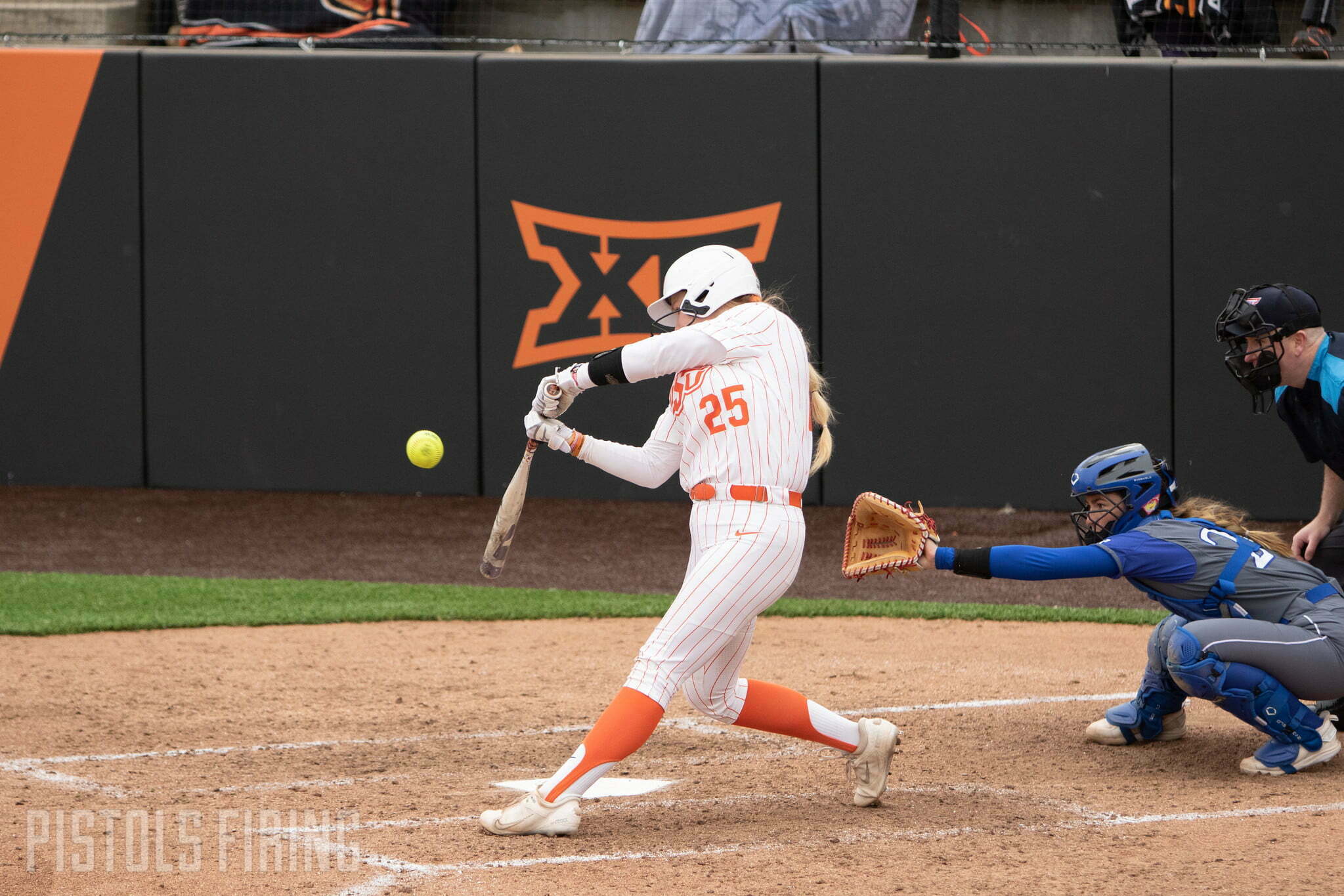 STILLWATER — Julia Cottrill hadn’t recorded a hit in her past dozen at-bats, but Friday she provided the Cowgirls with their dozenth run.

Oklahoma State defeated Fordham 12-0 in five innings in Cowgirl Stadium, the most lopsided NCAA Tournament game in OSU’s history. The final runs came via a Cottrill grand slam off the scoreboard in right field.

Cottrill hadn’t played since the second game in the Bedlam series and was 0-for-12 against OU and Florida State. She didn’t start Friday but came in as a pinch hitter for Chelsea Alexander in the fourth just to battle through a seven-pitch at-bat before belting a grand slam.

“I think more than the swing, the practice that we’ve been getting has been really helpful [for her confidence],” Cottrill said. “Gaining confidence in practice and taking it into the games. I think having a plan and sticking to it and having teammates help you with that as well.”

Cottrill wasn’t the only player to bonk a ball off the scoreboard. Earlier in the fourth inning, Katelynn Carwile, the Pride of Purcell, America, nearly cleared the board but made a good thud off the top of it. It was a solo shot to start the inning, Carwile’s seventh home run of the year. She is hitting a team-best .362 in her sophomore season.

Chyenne Factor got the scoring started with a two-out, bases-loaded single in the second. That hit scored Taylor Tuck and Kiley Naomi. Carwile followed that up with a double to left center, scoring Chelsea Alexander.

Karli Petty battled through a 12-pitch at-bat in the third inning, an at-bat that resulted in an RBI groundout to second that scored Sydney Pennington. Then with two outs and Hayley Busby on third, Naomi walked and stole second. Fordham catcher Amanda Carey tried to throw Naomi out at second to end the inning, but Naomi was safe and Busby slid in safe at home. Then Alexander did Alexander things. She had a bunt single, and Naomi was able to score from second on an errant throw, making it 6-0.

Kelly Maxwell was expectedly dominant in her start in the circle. OSU’s ace threw all five innings where she gave up two hits, one walk and struck out 10 of the 18 batters she faced. She threw only 72 pitches, which could be beneficial for OSU moving through the regional.

“I don’t even know that she was as sharp as she would like to be,” OSU coach Kenny Gajewski said. “So, it’s good to see that.”

With the win, OSU moves on to play Nebraska at 1 p.m. Saturday. Nebraska beat North Texas 3-0 on Friday afternoon to advance to 41-14 on the season. The winner of that game won’t have to play again until Sunday, the loser would play again at 6 p.m. Saturday.

“We gotta play tomorrow,” Gajewski said. “It’s over with. Nebraska doesn’t care. They think they’re pretty good. We know they’re good. So I don’t really know that they’re going, ‘Oh my gosh, they run-ruled Fordham.’ I think it’s good for our kids in a way. It’s probably going to help them feel good, but we’re gonna have to bounce back and make it happen again.”