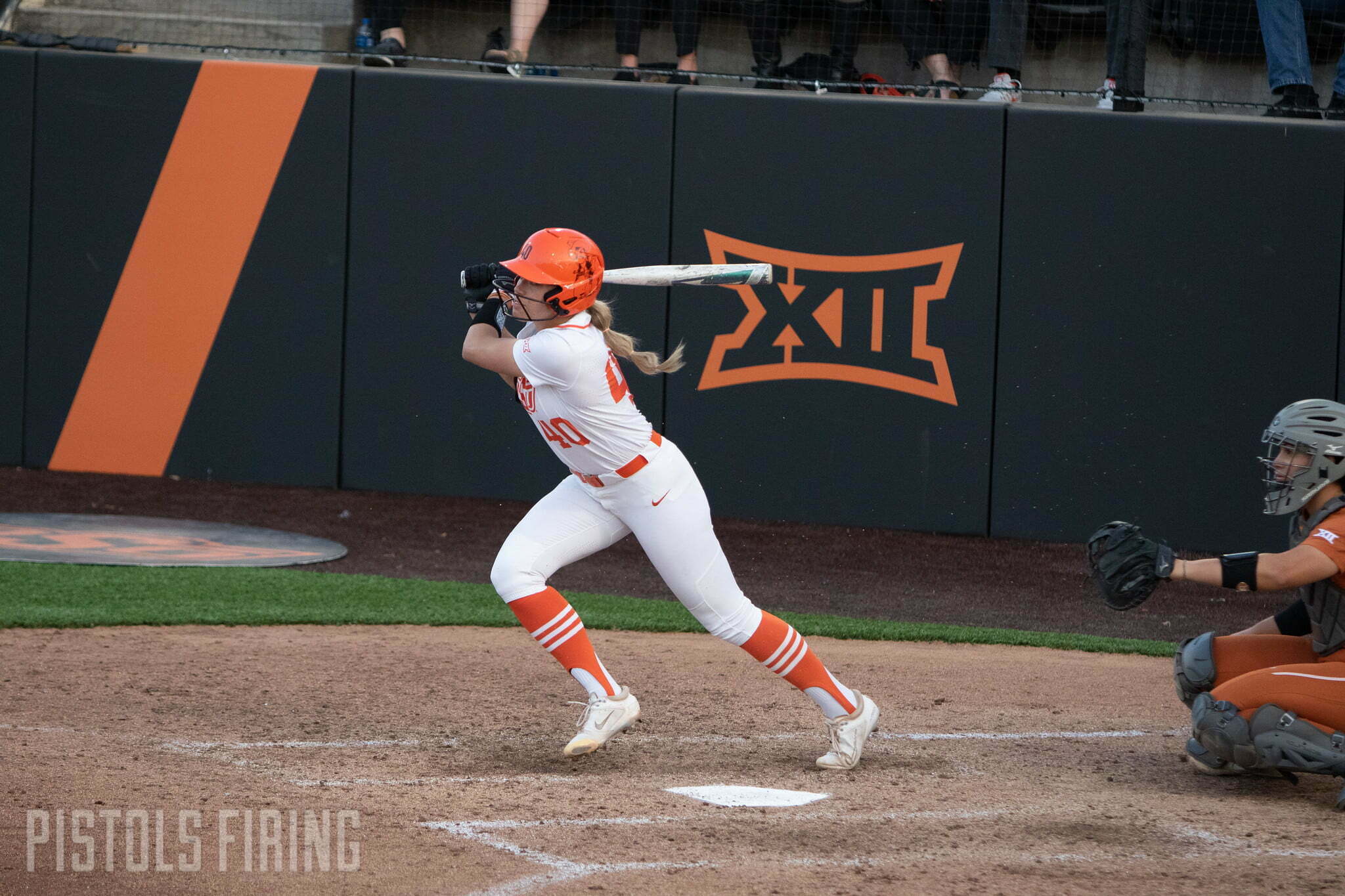 No. 6 Oklahoma State secured a series sweep over No. 16 Texas, taking Games 2 and 3 on Sunday. The Seniors showed up on Senior Day.

Mother Nature made for a double-header on Senior Day. Saturday’s game was pushed to Sunday morning due to weather which allowed Miranda Elish to log a memorable win against her former team.

Elish moved to 13-4 on the season, allowing just two hits, walking one Longhorn and striking out 10. You think she was a little fired up?

She also hit the game’s only home run, a two-run shot over the right field wall.

Chelsea Alexander, another senior honored on Sunday, stole second base in the bottom of the third but did so awkwardly. When she slid across the base, her cleats caught the bag causing her ankle to bend in an unnatural way. But she popped right up and remained in the game and then used her speed to put the Cowgirls on the board.

Alexander also helped close the book on the Longhorns, landing consecutive deep balls to left field, one just an arm’s length from going over the wall.

Alexander’s run was the first of three Cowgirl scores in the third inning. The next two came off the bat of Elish.

Elish was one out away from her first complete game shutout of the season, when the collective blood pressure of the Loyal and True in attendance spiked. A pitch got away from her high and into the net and Elish immediately grabbed her right shoulder with apparent concern. She had stretched her throwing arm a couple of times between preceding pitches but now she beckoned toward the Cowgirls’ dugout and, after a quick conversation, she was done for the game, and the day.

Kelly Maxwell came on for the final three pitches after Elish had to leave the game. She threw a strike and into the dirt before Texas pitch hitter Whitaker flied out to centerfield to end the game and secure the series win.

On Friday, Julia Cottrill hit a walk-off home run in extra innings. She went yard again in Game 3 to get the Cowgirls on the board in the second. Texas answered when Janae Jefferson crossed the bag on UT’s Katie Cimusz’s sac-fly. Jefferson had three hits in the finale, the third of which set the Big 12 career with 333 hits.

The Cowgirls took the lead in the bottom of the third when Longhorns catcher Mary Iakopo threw Brianna Evans out at second on a steal attempt. She must have forgotten Chelsea Alexander was on third base and that the Cowgirls only had one out. Alexander showed off her trademark speed once more. The ankle appears to be fine.

Morgan Day moved to 9-2 on the year but had to pitch her way out of a jam or to get get there. She allowed seven hits but just one run, stranding seven Longhorns in five innings. Kelly Maxwell came in as a reliever for the second time on Sunday, pitching the final two innings, logging one strikeout and allowing one hit and no runs.

OSU’s outfield backed up its pitching staff nicely on Sunday.

Avery Hobson made am impressive diving catch for an out in the fifth after replacing Alexander at left field. And then Katelynn Carwile secured the win with this foul-out, sacrificing her body for the sweep.

The series sweep kept the Cowgirls at the top of the Big 12. OSU heads into its penultimate weekend 38-7 and 14-1 in conference play. The Cowgirls next head to Tallahassee for a Thursday-Friday three-game series with Florida State, before heading to Norman for a Bedlam series the week after. After that, the Big 12 Tournament and then the postseason.

The only thing that could dampen the bright orange mood on Sunday afternoon was the sight of Miranda Elish donning a shoulder sling as her teammates made the O-S-U in celebration. The Cowgirls will need her for the stretch run.