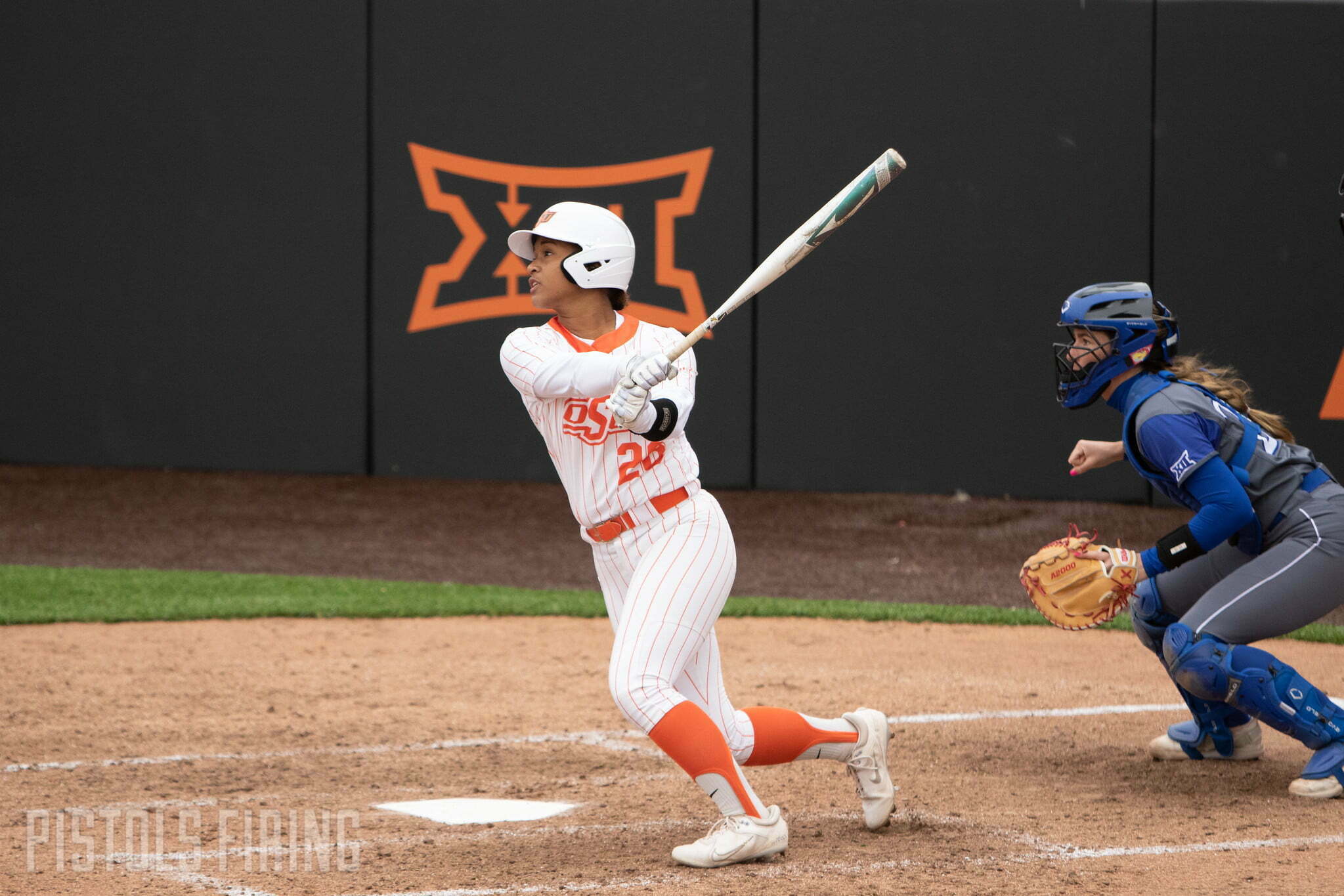 The Cowgirls were stellar in the circle, dangerous from the plate and took advantage of their opponent’s mishaps. Then they finished the game on an eye-popping defensive stop. In other words, it was just another day at the park for Kenny Gajewski’s squad.

No. 7 Oklahoma State defeated Tulsa 12-1 in just six innings thanks to a seven-run final inning and a double-play that should be on SportsCenter tonight.

OSU did all of its scoring damage in two innings thanks to three Cowgirls.

Sydney Pennington added to her program record with a three-run homer in the top of the second. She went 2-4 with one strikeout, that deep ball and ended the game with five runs batted in.

Then Katelynn Carwile reached on a fielding error sending Chelsea Alexander across the bag for an unearned run but she would get another later the honest way. The home team played a messy game and the visitors took advantage. Tulsa was charged with two errors to OSU’s zero and the Cowgirls scored six unearned runs.

Tulsa’s Haley Morgan was responsible for the sole run for the home team with a third-inning home run to left field. It was all Cowgirls after that.

Up 5-1, OSU scored seven runs on eight hits in the top of the sixth to facilitate its 12th run-rule victory of the season.

Morgyn Wynne hit her fourth dinger of the season on the first at-bat in the sixth, to open the flood gates.

Hayley Busby singled to center field before Brianna Evans pinched for her on first, stole second and then scored on Carwile’s home run.

Then Pennington’s single up the middle sent two more Cowgirls across.

Wynne topped the score off at 12 with a double RBI to right field that saw Pennington score. Wynne finished 3-3 with two RBI and that homer.

OSU pitcher Kelly Maxwell was named a finalist for the Player of the Year award on Wednesday but she got to watch her teammate pitch a near shutout from the bullpen.

Morgan Day moved to 8-2 on the year, pitching a complete game while allowing just two hits — one was a home run — and walking three. She struck out nine Tulsa batters, including five in the last three innings.

After that seven-run sixth inning, the Cowgirls needed just three outs to end this one early. Day gave them one, handing Tulsa’s Gracie Jarvis a K swinging, before the game ended in dramatic fashion.

Kiley Naomi missed the Cowgirls’ entire three-game series against Kansas last weekend but she had a nice return on Wednesday. She went just 1-4 from the plate but recorded two assists including engineering the 6-4-3 double-play that ended game.

The Cowgirls’ sixth-straight win moves them to 35-7 on the year. They’re 11-1 in conference play and will get a chance to add to their three-game Big 12 lead when they face the league’s third-ranked Longhorns for a three-game series in which is scheduled to start Friday night at 6 p.m. at Cowgirl Stadium in Stillwater. Texas comes in ranked No. 16.

“Really proud of our kids, the way we fought, the way we just continued to build and have great at-bats,” said OSU head coach Kenny Gajweski. “I thought that Morgan Day was really good and just happy to see. This just propels us into the weekend now [against] a really tough Big 12 conference matchup with Texas.