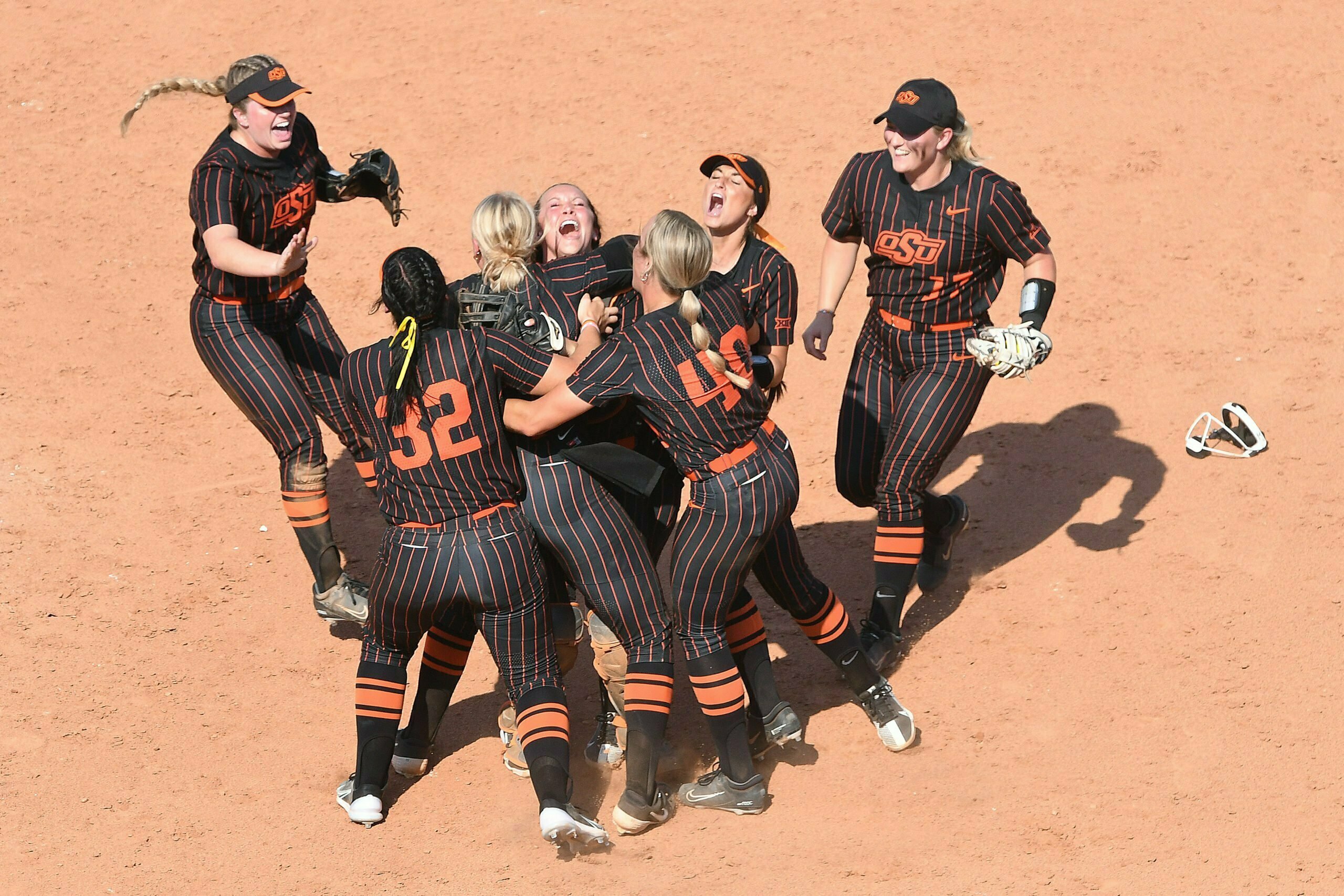 Oklahoma State defeated top-ranked Oklahoma 4-3 on Saturday in eight innings to win the Big 12 softball tournament on Saturday in Oklahoma City. Robert Gilbert, the book’s author, probably couldn’t ask for a better testimonial. It’s the first time OSU has won a conference tournament since being Big Eight champs in 1992. It’s the Cowgirls’ first conference crown since OSU won the Big Eight regular season in 1995. It also marks the first time the Cowgirls have taken a game off OU in consecutive seasons since 2011.

“There was an excerpt in there about taking off the mental parking brake,” Gajewski said. “When I heard that last night, it clicked in my brain. I was like, ‘We have the emergency brake on.’ Why? I don’t know, but it’s probably me. When anything is going good or bad, it’s probably a reflection of me.”

With the parking brake off, OSU was able to become the first program not named OU to win the Big 12 tournament since Missouri won in 2009. (Tournament’s weren’t held between 2011 and 2016.)

The game-winning run wasn’t all that ceremonious — it came via bases-loaded walk. But don’t tell that to the OSU fans who were a part of a tournament-record crowd of 5,410. For the first time seemingly all day, the outnumbered orange members of the gallery were all standing while the crimson crew were glued to the bleachers.

It was almost disaster for the Cowgirls, who loaded the bases with no outs before OU snagged a pair of outs without leaking a run. Squinky seemed to be lurking around Hall of Fame Stadium. Folks from Norman would’ve called it Sooner Magic had OU been able to get out of that jam without allowing a run.

But with two outs, Kiley Naomi stepped to the dish. Naomi has struggled at the plate as of late, entering the day with a .229 batting average which was worst among OSU’s starters. But Naomi didn’t need to improve her batting average, she just had to find some calm in the storm of emotions this game was and watch four straight pitches go by. She did it, and Sydney Pennington got to walk across home plate.

OU had a shot at a rebuttal. Morgan Day put away the first two batters she faced, but Alyssa Brito reached after Naomi made an excellent play at shortstop before making an errant throw to first. That brought the game-winning run to the plate — Squinky Magic was again looming.

But, Naomi got another shot at it when Jana Johns chopped a ball to her. Like watching four pitches go by, it was a simple play made excruciating because of the moment it was in. Naomi scooped up the ball and fluttered it over to Hayley Busby at first. The Cowgirls were champions again.

The Cowgirls have been an undisputed top-10 team in college softball the past few seasons, but the Big Bad Wolf resides in their conference, keeping them away from league hardware. If OSU was in any other conference, it probably would’ve had a conference crown under Gajewski by now, but OU has denied the Cowgirls at every pass. The Cowgirls overcame that Saturday.

OSU trailed 2-0 entering the fourth inning, an inning the Cowgirls gained some momentum.

The Cowgirls loaded the bases loaded with one out before Hayley Busby singled through the left side, scoring Katelynn Carwile. Then Taylor Tuck hit a sacrifice fly to score Elish to tie things at 2.

OSU took a 3-2 lead in the fifth. Chelsea Alexander led the inning off with a bunt single. She was able to advance to second on an errant throw to first. Chyenne Factor then put down another bunt to move Alexander to third, but the play wasn’t over, as plays involving Alexander never seem to be. Factor rounded first and forced a rundown allowing a fired up Alexander to score.

But then Jocelyn Alo took that momentum and crushed it over the left-field wall. College softball’s all-time leader in career home runs, Alo tied things up with a solo home run that narrowly stayed fair.

Every at-bat from that point out was must-see TV, but the TV feed cut out for most of it, heightening the drama for those following along outside of the stadium.

Both teams had base runners in the sixth, but both got only as far as first. OSU went down in order in the seventh, giving OU an opportunity for a walk off. And Jocelyn Alo had another at-bat. Rylie Boone led off the frame with a bunt single before Day struck out Tiare Jennings. That brought up Alo. She drove a ball into the gap in left center, but Factor was able to run it down and retire the Big 12’s Player of the Year. Factor also caught the third out of the inning, setting up the extra-inning victory for the Cowgirls.

Day was named the tournament’s Most Outstanding Player, and she was outstanding. Day spent much of the season as the Cowgirls’ third pitcher. She got an increased workload when Elish couldn’t throw anymore because of a bicep injury. Day transferred to Stillwater this year from Illinois State where she was an All-Missouri Valley Conference First Team selection last season.

Day threw a complete game to beat Texas on Friday before coming out of the bullpen against OU. On Saturday, Day threw five innings where she gave up one run off three hits while striking out three. From rotational pitcher to MVP.

“I’m grateful that I got to be in the circle, but whether it was from the circle, from the bullpen, from the dugout, I think I would have been just as happy with whatever role I was in,” Day said. “I look back a year ago today and I played in the Missouri Valley Conference tournament — lost, went home, was done for the season. And today I get to leave here with my team as a Big 12 champion. It’s why I came to Oklahoma State.”

This win was big for a lot of reasons. It gave OSU some hardware. It was against a No. 1 team. It was against the Cowgirls’ in-state rival. But it also likely locked up a Top 8 seed for OSU, meaning the Cowgirls would host a Super Regional to get to the Women’s College World Series for a third consecutive time.

The Cowgirls will take a retreat trip to Broken Bow this week ahead of the postseason. The trophy is nice, but Gajewski said the impact of this win won’t be something the players can physically hold like a trophy.

“It’s just a trophy to collect dust,” Gajewski said. “To me, it’s the memories that these kids have. We’re an elite team. We’re an elite program. I think we’ve proven that.”