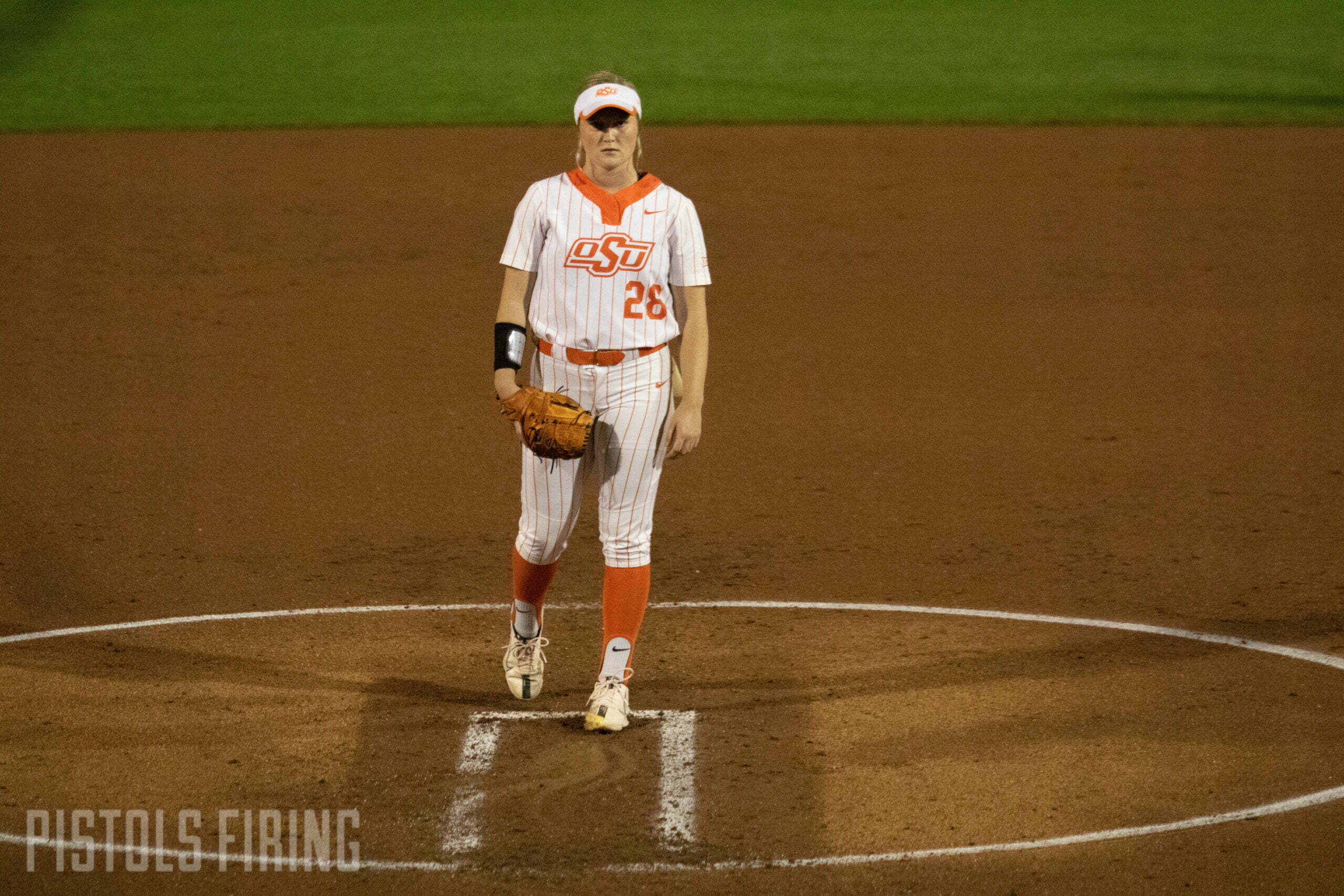 STILLWATER — Kelly Maxwell rotated through softballs more Thursday night than she usually does. She said they kept getting wet, so she’d toss them back to the home plate umpire and get a new one. No matter the ball, she was dominant.

Oklahoma State defeated Clemson 2-0 on Thursday night at Cowgirl Stadium in Game 1 of the teams’ Super Regional matchup. The win puts the Cowgirls one win away from a third straight Women’s College World Series. The Cowgirls left seven runners on base and five in scoring position Thursday, but the two they brought home were more than enough for Maxwell.

OSU’s ace, Maxwell threw all seven innings where she allowed only two hits and one walk while striking out 13. With each passing strike out, Maxwell’s teammates around her were hooping and hollering, but Maxwell was locked in like she always seems to be. It’s a deadpan type of dominance that might put more fear into opposing teams than someone who is fist-pumping and screaming.

“I think everything was working,” Maxwell said. “Just being able to get their hitters off timing, having my off-speed work again tonight and then my rise, too. It was spinning well.”

The Cowgirls breakthrough came in the fifth inning. Taylor Tuck hit a leadoff double to right center before Brianna Evans came on as a pinch runner. Evans advanced to third on a Kiley Naomi sacrifice bunt before Chelsea Alexander drew a walk and stole second.

With two runners on and one out, Chyenne Factor hit a ball back up the middle that scored the pair.

It looked as if the Cowgirls might get more when Katelynn Carwile doubled to left center in the next at-bat putting another pair in scoring position. After Miranda Elish popped out, Clemson intentionally walked Sydney Pennington to load the bases, but Karli Petty grounded into a force out.

“I thought we swung the bats good,” OSU coach Kenny Gajewski said. “We hit some balls hard. We just couldn’t string enough of them together. We finally got a leadoff hitter on, and things happened.”

Clemson threw Millie Thompson instead of All-ACC First Team selection Valerie Cagle. Tigers coach John Rittman said it’s more of a 1A and 1B situation, as Thompson actually entered the day with a slightly better ERA than Cagle, despite pitching about 40 fewer innings. Gajewski said it was a little surprising to him, but he added that at this point in the year, nothing is too surprising.

That puts Cagle up against Morgan Day in Friday’s game, where first pitch is scheduled for 8 p.m. It’s must-win for Clemson. OSU has to get one win in two games to advance to Oklahoma City.

“The idea here is to win the first game,” Gajewski said. “It doesn’t guarantee you anything. It’s the idea that both teams are after. You’re trying to get that first game.”