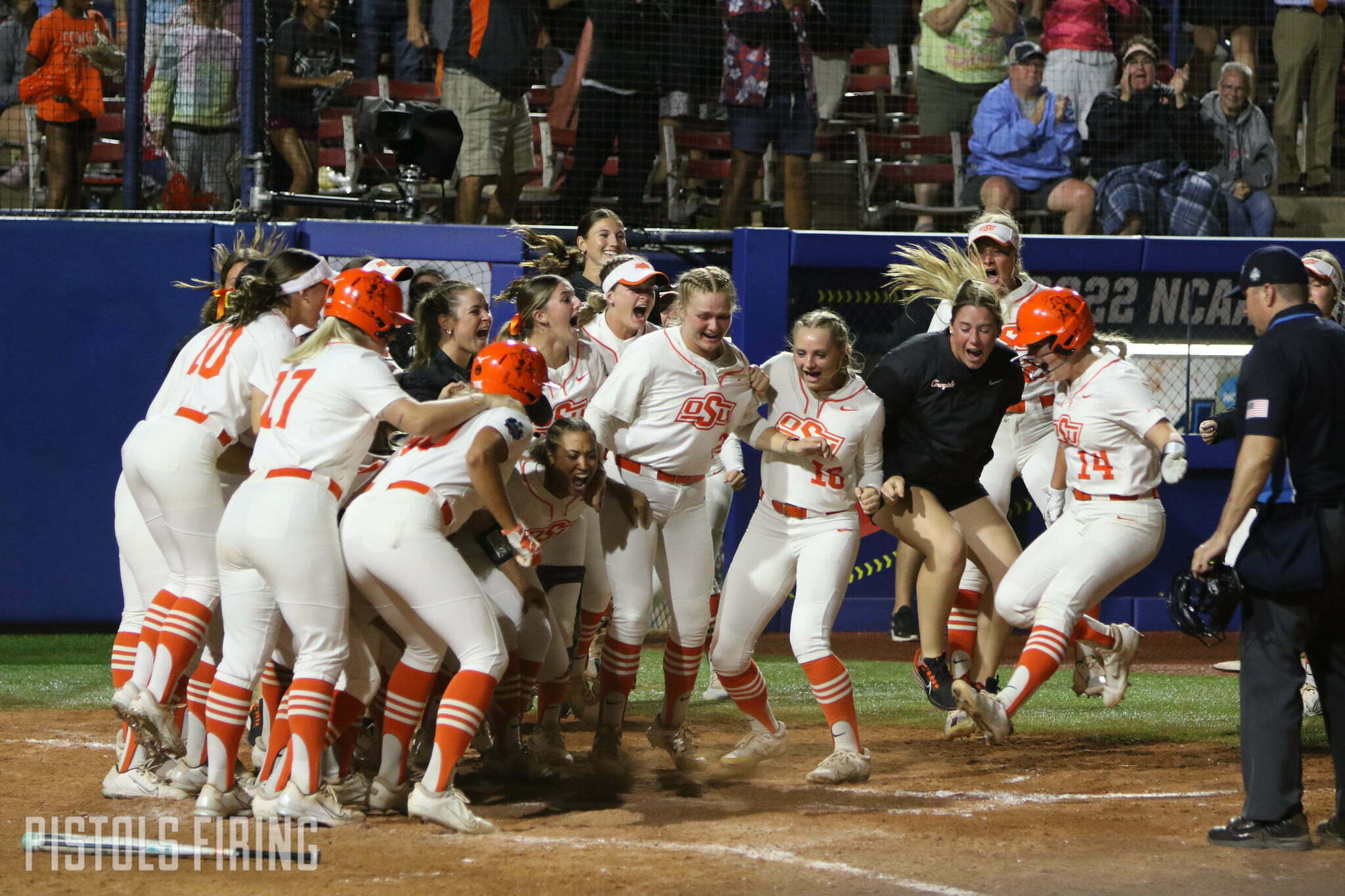 OKLAHOMA CITY — Karli Petty hasn’t been an everyday starter for much of this season, and after a pair of unsuccessful at-bats, Kenny Gajewksi said he was considering pinch-hitting for her. But when the moment was at its peak, the Oklahoma kid delivered.

Oklahoma State defeated Arizona 4-2 on Thursday in the opening round of the Women’s College World Series after Petty clobbered a three-run home run to straightaway center in the sixth with the Cowgirls down a run. The Cowgirls advance to play Florida at 6 p.m. Saturday.

Petty, who played high school ball at Southmoore where she was a two-time state champ, has played on the hallowed grounds of Hall of Fame Stadium before, but in front of a Session 2 record crowd of 12,312, the weight of that home run outdoes the magnitude of any she has hit before.

“It’s really nice to come back and play somewhere that’s really familiar, and it’s just even better to come back with over 12,000 fans,” Petty said. “It’s really exciting to see how much this place has grown from when I was little growing up. It’s an amazing feeling to be in this moment in all aspects of my life.”

The Wildcats took the lead in the fifth when Kelly Maxwell gave up a two-run home run. They were the first runs Maxwell has allowed in all phases of the NCAA Tournament.

The inning started with Sophia Carroll singling up the middle on an eight-pitch at-bat. She advanced to second on a ground out before Maxwell issued one of the 14 strikeouts she had on the day. But with two down, Sharlize Palacios got ahold of a rare Maxwell mistake and sent a home run to left center. It took the air out of Hall of Fame Stadium, which was mostly filled with orange-clad fans.

“I definitely felt my rise ball was on tonight a little more than probably what it normally has been,” Maxwell said. “Normally I’ve been relying heavily on my change-up. So that was a bit firm tonight. It wasn’t moving as sharp, so I was glad that I had my rise working. Then just going after hitters — 126 pitches isn’t crazy efficient, but I got the job done, I guess.”

After the Wildcats took the lead, the Cowgirls loaded the bases in the bottom of the fifth, but the inning was empty of OSU runs. Taylor Tuck was hit by a pitch, and Kiley Naomi and Chyenne Factor drew walks. Sophomore Katelynn Carwile was next up, and after fouling off three consecutive pitches, she popped up to left, ending the inning.

OSU left six runners on the bases Thursday, including three in scoring position.

After a slow offensive start, the game’s seal was finally broken in the fourth inning. With one out, Miranda Elish began a trot to first after thinking her elbow guard was hit by a pitch. It went to review, and it was determined it didn’t hit her. Although that seemed to go against OSU at the time, it ended up being a positive for the Cowgirls. Upon returning to the batter’s box, Elish roped a ball to left, good for a double. Brianna Evans came on as a pinch runner before Sydney Pennington put a ball in the gap in right center, scoring Evans and giving OSU a 1-0 lead.

It was a good night for Elish and Pennington. Elish, in her first WCWS since the 2018 season at Oregon, went 2-for-2 at the dish while also drawing a walk. Pennington was 2-for-3 with the RBI and the run scored.

“All those kids have played such a huge role here,” Gajewski said. “Kelly now in her third year — fourth year, and Sydney in her fifth year and Elish obviously just joining us, but in moments like these here, you want to lean those guys. You want your young kids to look at them and go, this is how it’s done.”

The past two times the Cowgirls have made it to Oklahoma City, they’ve won their first game before dropping their next two. That’s a trend they’ll look to buck on Saturday when OSU plays a 49-17 Florida team that was the 14 seed entering Regionals. The Gators beat Oregon State 7-1 on Thursday.

The game won’t be short on storylines. OSU hired Gajewski off Florida coach Tim Walton’s staff. Julia Cottrill, who didn’t play Thursday but has split time at catcher with Taylor Tuck, played at Florida last season before transferring back home to Stillwater. Since Gajewksi took over at OSU, the Cowgirls have played Florida four times, going 2-2. They last met in the 2019 WCWS, a game OSU won 2-1.

The game is at 6 p.m. Saturday and will be televised on ESPN.