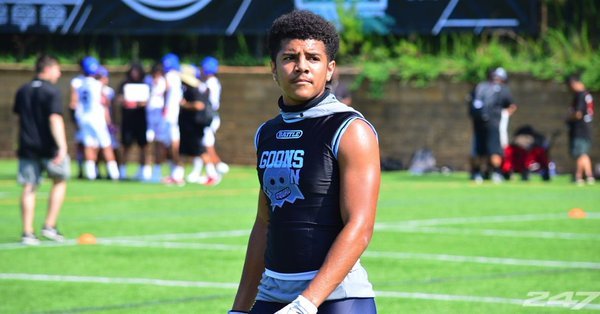 Oklahoma State extended an offer to four-star, class of 2020 cornerback Myles Slusher on his visit to Stillwater for the Cowboys’ final junior day back in January.

The Oklahoma product has received eight total offers to this point, but Oklahoma State looks to be in a good position moving forward.

“I have a good relationship with Coach Duffie and it’s improving as it goes on. He definitely gives me knowledge on the game and is helping me improve my game,” Slusher said. “It’s my home-state, so they will always be in the top (group). I have a lot of people in my family that went to OSU.” [Rivals.com]

The proximity of Stillwater to his home town of Broken Arrow and the family ties he has to the school seem to be key factors in his decision-making process. Slusher has only visited Oklahoma State and Arkansas so far, but he plans to take more campus visits before he makes his final decision. The other schools currently in the mix are Arkansas, Baylor, LSU, Michigan, Nebraska, Nevada and Texas.

Out of the schools listed above, the one to watch out for looks to be LSU.

“The one that came through that was just, like, wow was LSU,” Slusher said. “They always produce great DBs, so it gave me that feeling that I am one of the top too.” [Rivals.com]

Slusher played in 12 varsity games as a sophomore and recording an impressive 41 total tackles along with four interceptions for the 6A Broken Arrow Tigers. The 6-foot, 175-pound defensive back has great reaction time and he’s not afraid to come up and hit somebody. In addition, he does a great job of high-pointing the football to make a deflection or interception. From watching his film, he actually looks like he’d be a great safety in Coach Jim Knowles’ defense with how aggressively he plays the run.

As of now, Oklahoma State has one cornerback commit in the 2020 class in three-star, DeSoto, TX product Jabbar Muhammad. It’s still early in the process as Slusher is only a junior, but it is encouraging that he currently thinks so highly of the Cowboys. Slusher would be the highest-ranked cornerback the Pokes have had since Justin Gilbert in 2010.