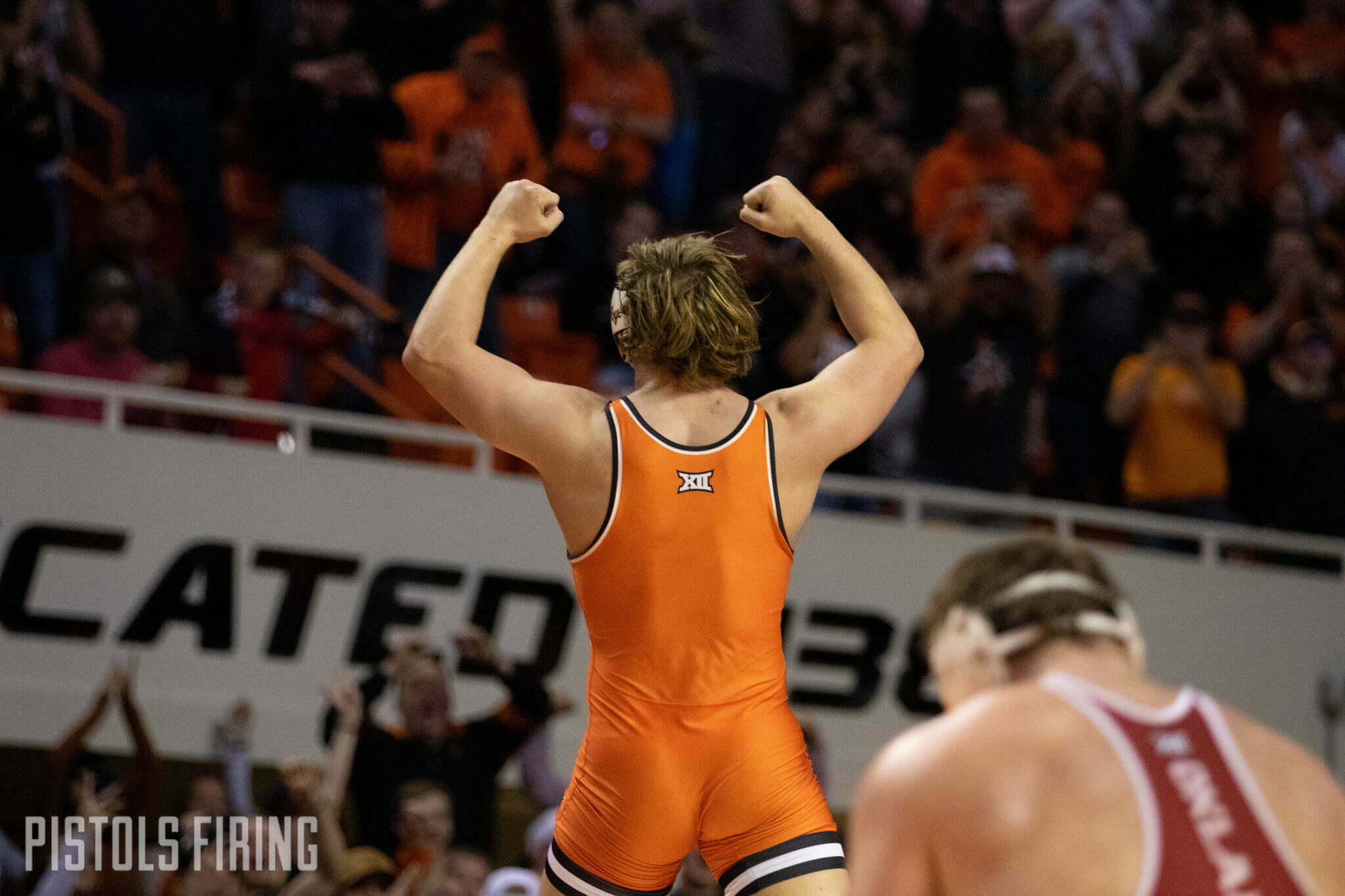 STILLWATER — Jake Heindselman didn’t endear himself to Cowboy fans in the December edition of Bedlam, but the Cowboy faithful’s heel got his comeuppance in a big way on Sunday.

A beat up Oklahoma State squad defeated Oklahoma 18-16 in Gallagher-Iba Arena with Luke Surber avenging his loss from earlier in the season to the Sooner heavyweight who got into a post-dual scuffle with AJ Ferrari after the Bedlam in Norman.

With OSU down 13-7 in the dual, Surber and Heindselman went into the second period tied at 0. Surber rolled into a quick escape to start the second before scoring a takedown that sent the GIA crowd of 7,918 into a frenzy. Heindselman scored two escapes, but Surber won 4-2 with a riding time point. Ferrari ran up and down OSU’s side of the mat hyping up the crowd.

“It was crazy,” Surber said. “After I got that takedown, I couldn’t hear anything the rest of the match. It was just echoing. I probably could’ve beaten him a little worse, but I got the win so that’s good.

“Once I got that takedown, I was like, ‘I’m not losing.’ That’s what he does, he wants to keep every match close. He doesn’t score a lot of points. I knew once I took him down, he couldn’t take me down.”

At 125, No. 7 Trevor Mastrogiovanni was upset by No. 32 Joey Prata 4-1, making the dual 16-10. That meant the Cowboys needed bonus points from either Daton Fix or Carter Young; they got bonus points from both.

Fix secured a major decision with time dwindling down in the third period, winning 12-4. Fix advanced to 17-0 on the year, trimming OU’s lead to 16-14.

Only needing a decision to secure OSU’s 15th straight Bedlam win, Young, a true freshman from Stillwater High, scored on three takedowns in the first period against Jacob Butler. He secured his major decision with a takedown in the third period and beat Butler 11-3 with riding time.

“That’s awesome — you live for those moments, you know?” Young said. “I was ready to put on for my team. I wasn’t going to go in there and lose that match. It’s just awesome having the crowd behind me. Felt good. It was awesome.”

The Cowboys are banged up all throughout the lineup. Gavin Stika is in for Ferrari at 197 pounds after Ferrari’s car wreck. Daniel Manibog filled in for Wyatt Sheets at 157, and Jalin Harper filled in for Travis Wittlake at 165 on Sunday. Sheets and Wittlake were injured in Friday’s dual against Bucknell. After Bedlam, Smith said Sheets should be back soon, and Smith said of Wittlake “we’ll find out a little bit more in the future.”

Mastrogiovanni also doesn’t seem to be at 100%. Before the Iowa dual last weekend, Smith said Mastrogiovanni hadn’t practiced the week before.

OSU lost all four of those weights, but thanks to inspired outings from Kaden Gfeller, Dustin Plott, Surber, Fix and Young, OSU advanced to 147-27-10 in the all-time Bedlam series.