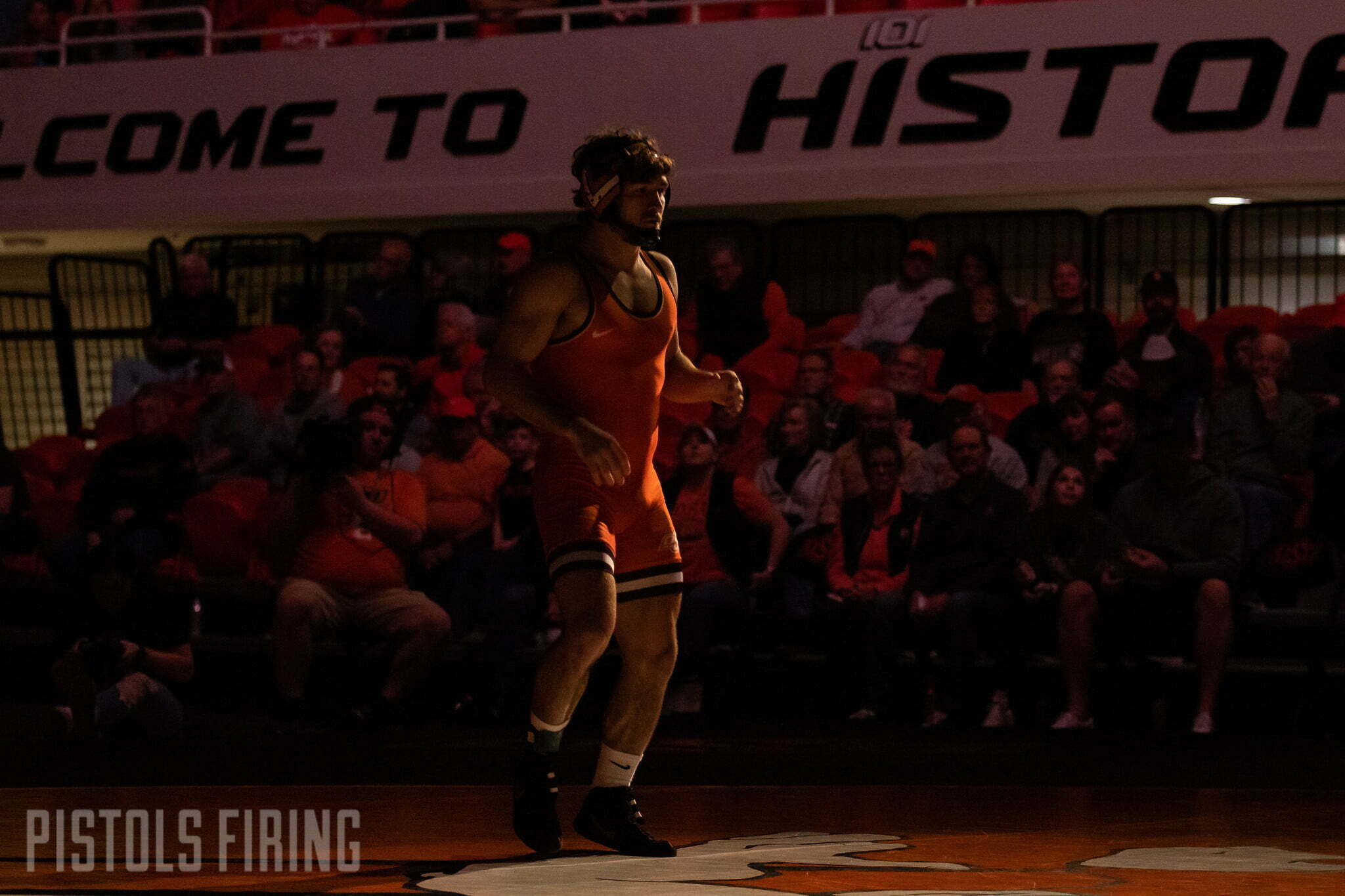 STILLWATER — Since the Cowboys started wrestling in Gallagher Hall in 1939, 550 teams have come in and wrestled the Cowboys; 500 of them have left in defeat.

Oklahoma State defeated South Dakota State 29-6 on Friday night to reach half a thousand dual victories in the building. The Cowboys are 500-44-6 in Gallagher-Iba Arena, a 91% winning percentage. After back-to-back losses to Northern Iowa and Iowa State last weekend, Friday’s dual starts a new streak for the Cowboys. It certainly isn’t the 67-dual winning streak between 1959 and 1967 in GIA or the 37-dual streak between 1939 and 1951.

“I’d have liked to have it last week,” OSU coach John Smith said. “[It feels] good. I’m glad this team got to be a part of that. Five hundred victories for a program, just at home, quite an accomplishment.”

The marquee match of the night lived up to its billing at 174 pounds. No. 10 Dustin Plott beat No. 9 Cade DeVos 5-3. Plott scored a first-period takedown, and the match entered the third period tied at 2 after a pair of DeVos escapes. After a Plott escape, the sophomore from Tuttle scored another takedown in the third to secure his win. Plott was on the wrong end of a shock pin last weekend in a match he was winning. He advances to 11-1 this season.

“Really, [Friday’s win] doesn’t really mean that much,” Plott said. “Not taking it for granted. He was a great competitor. Thought I needed to wrestle more offensive and definitely have a better pace than what I did, but got a good win against a good opponent. It feels like another match. That’s kind of what I learned last week is it’s just a wrestling match. Worst-case scenario kind of happened last week and I’m not gonna say I needed it, but definitely revealed some things to me that I need to focus on and fix coming into this week.”

Daton Fix scored a remarkable fall against Gabriel Tagg at 133. In the third period, Fix had Tagg down on the edge of the mat. Fix nearly gave Tagg his back before snapping him into a cradle as fast as a Justice Hill jump cut. Fix showed good mat awareness on the move, making sure to keep a toe in the circle. It’s Fix’s fifth fall of the season.

OSU also scored bonus points at 157 pounds, as Wyatt Sheets busted a three-match skid by beating Kenny O’Neil 10-1. Sheets took a 5-0 lead into the third period. He let O’Neil up to start the third before hitting a slick fireman’s carry and converting two near-fall points off it. He had more than four minutes of riding time in the bout.

OSU’s last set of bonus points came at 184 pounds, where Dakota Geer took down Cade King seven times to win 16-7. It was Geer’s ninth bonus-point victory of the season.

After five straight duals in GIA, Oklahoma State hits the road for a matchup with Missouri at 2 p.m. Sunday.