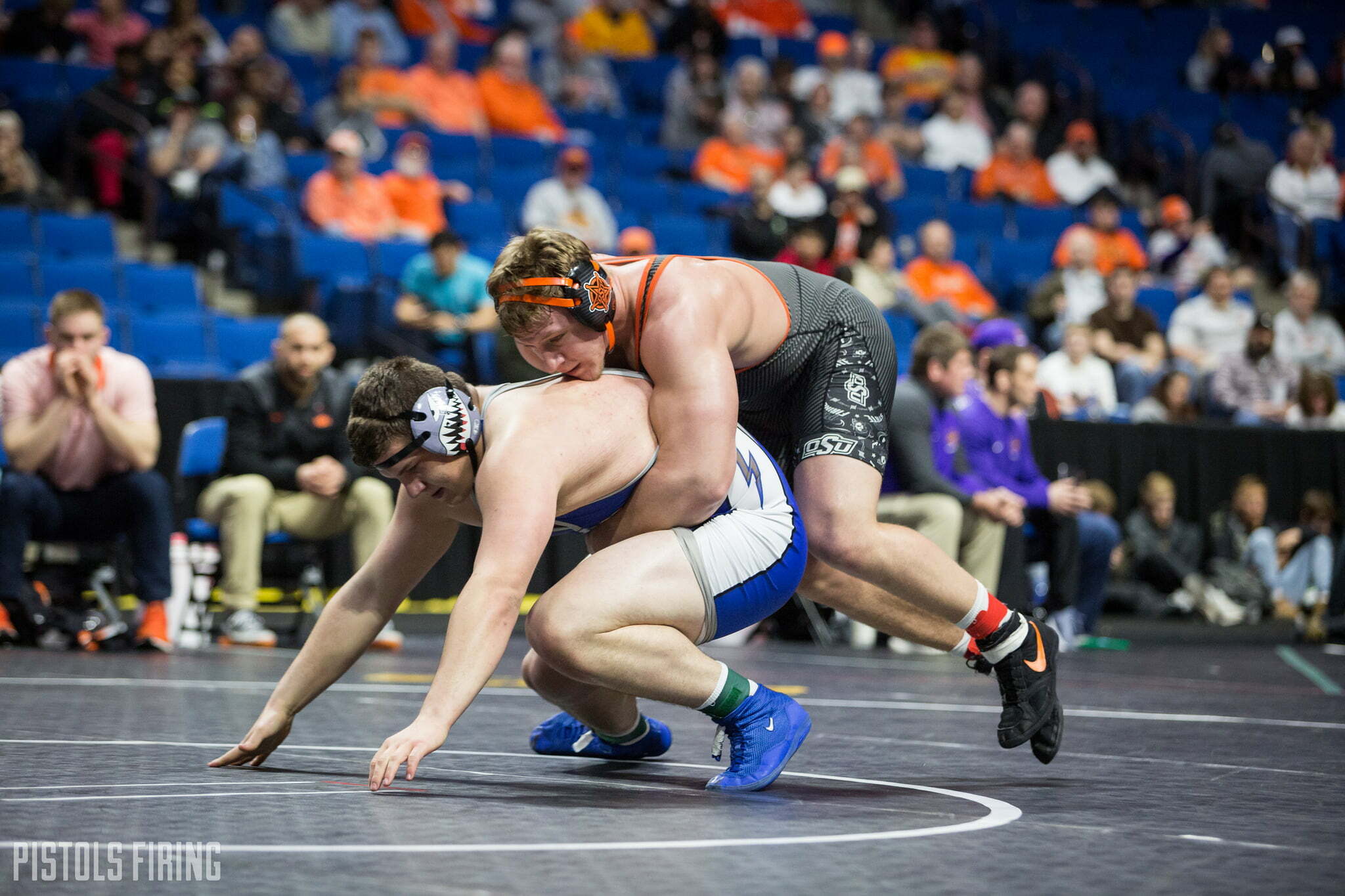 Seeds for the NCAA tournament will be released Wednesday at 5 p.m. Central time. Here are the criteria for NCAA seeding. 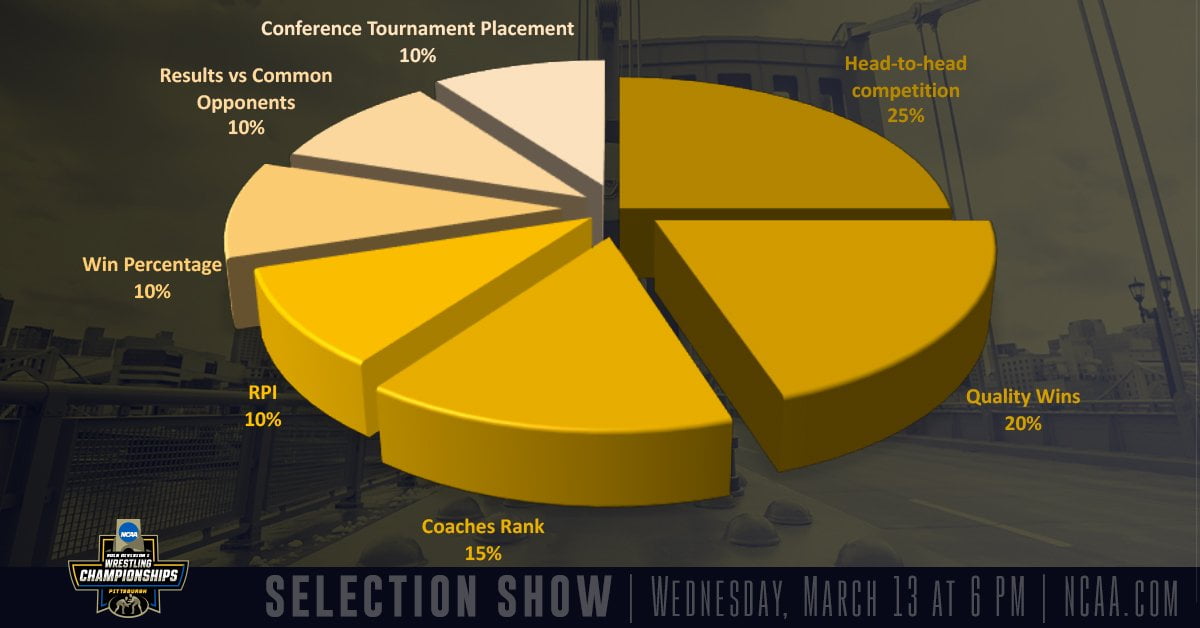 So factoring in that here’s what you should expect.

125: Nick Piccininni will be either the one or two seed. He finished first in his conference, is undefeated and has some pretty high quality wins. Opposite him will be Sebastian Rivera. Rivera’s only loss was at 133 when he bumped to wrestle top-ranked Stevan Micic. The next two guys at this weight are NCAA Champion Spencer Lee and Ronnie Bresser from Oregon State. One of them will be the three or four, and amazingly the defending champ could reasonably be the four as he has three losses this season. It will be interesting to see how it shakes out. On paper whatever draw Nick gets I would expect him to navigate to the semifinals fairly easily. All four of these guys are great though and there will be some wars on Friday night at the NCAA tournament.

133: Daton Fix should get the one seed. Stevan Micic is undefeated and has been ranked No. 1 most of the season, but has only wrestled 14 matches. Which bumps every other metric in Daton’s favor and seemingly would give Daton the nod as the No. 1 seed. Any way it goes this weight is a bear. John Smith said it’s the toughest weight he’s ever seen in his coaching career. That’s saying a lot. Any draw Daton gets will be rough. Ultimately I just hope he and Nick Suriano find themselves opposite each-other in the bracket. I believe Nick’s wrestling as well as anybody at this weight and will be the toughest test for Daton Fix at the NCAA tournament.

141: Kaid Brock will probably land in the 13-15 range. He’s a hard one to project. His high conference finish will help him, but most of the higher end wrestlers have head-to-head wins over him. His win percentage and number of quality wins aren’t great. They’re not horrible though.

149: Kaden Gfeller will probably drop in as a 5-8 seed depending on where the coaches rank him. He has some losses, but they’re all against highly ranked wrestlers that will get very good seeds.

165: Flip a coin for Joe Smith. With the weight changes and fifth place finish for Joe at the Big 12 tournament I have no idea where he’ll wind up seeded. I’m hoping the coaches rank will do enough for him to avoid wrestling a high seed very early. I wouldn’t expect a very high seed for Joe though.

174: Jacobe Smith is another one that’s hard to project simply because he hasn’t had a lot of matches at this weight class. He’s won every one of them he’s wrestled here though, won his conference tournament, and has some good head to head wins. He should be slotted at least top 8 and in the range to be an All-American. Dangerous guy with the way he wrestled last weekend.

184: This weight has been strange all year. There’s been a clear No. 1 in Myles Martin, and a group of guys that have all beaten each other up all season behind him. Geer has a similar record to most of that group and actually only has one loss at this weight class. I don’t know how he’ll be viewed without having many matches at this weight. Another really tough one to project.

197: I’ve said it a lot with these last four weights and it’s the same here. There’s no easy way to project a seed for a guy that’s only wrestled nine matches all season due to injury. He’s beat good guys in those matches, is undefeated, and a conference champion. Those all play in his favor. I just hope that they place him opposite Bo Nickal, as Preston has shown, in the limited time we’ve seen him the last two years, he definitely has the ability to beat anyone at this weight class. Him and Nickal matching up early would be a shame.

285: Most of the other weights were just written as conjecture for this. It’s sort of clear where we’ll see Piccininni, Daton Fix’s seed doesn’t really matter because the weight is so deep, and many of the others are very difficult to project simply because of all the lineup shifts the Cowboys were forced into this season. Guys could really be dropped anywhere on some of them.

Heavyweight matters! Seeding here will really impact the landscape of the tournament in a number of ways, so let’s dig in deep on it.

Derek White, Anthony Cassar, and Gable Steveson all are contenders for the one seed and title at this weight class. I attempted to rank each of the metrics used for seeding between the three and here’s how it breaks out.

My model isn’t flawless, but it’s the best thing I could come up to attempt to quantify who would have the edge. For conference placement it was pretty straight forward. Cassar and White would get the highest percentage as the both won their conference. For head to head they all beat each other, so stacked up against one another they would all be even. I used Wrestlestat to compare common opponents and I’m not 100 percent sure how this metric will work in comparing these three, but here’s how it comes off. White by virtue of beating Cassar has an edge on Steveson because he didn’t beat Cassar. And Cassar has an edge on White because he beat Steveson and White did not. So it ultimately just creates a circle. So I put them all on an even tier there. All the rest of the info was found on Wrestlestat as well, but winning percentage favors Steveson with White second and Cassar third and RPI favors White followed by Cassar, then Steveson.

In my excel formula I put together, the person with the lowest number would actually have the edge. So based on these White would be your No. 1 seed. Of course it’s not that simple. We have no idea what the coaches poll is/will be and as FloWrestling describes here, quality wins can not be calculated without knowing the coaches poll, and is a pretty complex piece of the equation. So basically it looks like Derek White is the leader in the clubhouse when it comes to the No. 1 seed. There’s still a lot to be determined with how the coaches poll shakes out.

Ultimately this one seed is as big as Derek White’s arms. Whoever gets it will have a much easier path to the final than the 2-3 seed.