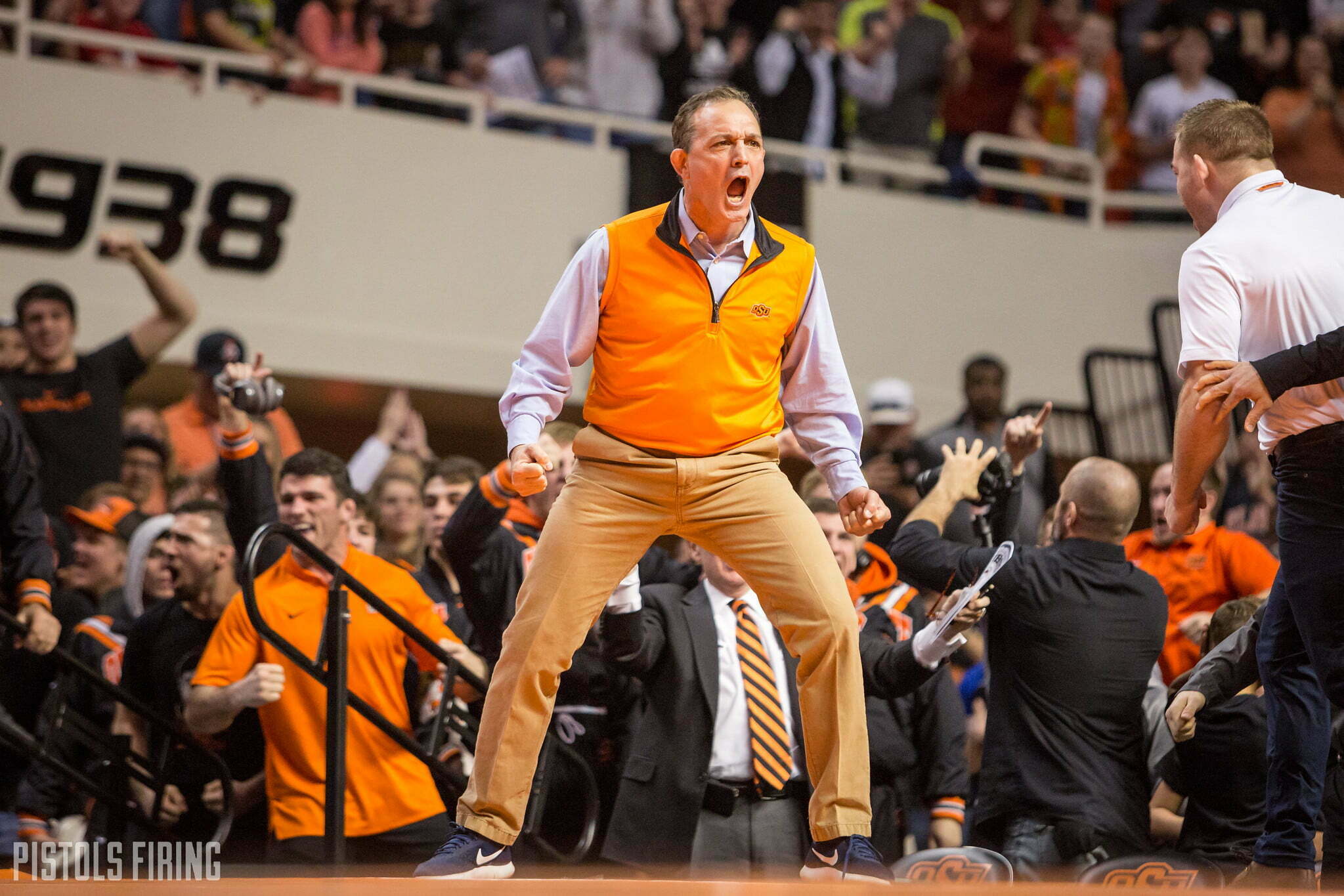 Lately I’ve had some time to brainstorm for some wrestling content, in the absence of wrestling.

I’m starting it out with this list of the top 10 wrestlers of the John Smith era and am actually going to dive even deeper and take a look at Ed Gallagher, Myron Roderick, Tommy Chesbro, and Joe Seay and make similar lists for them.

Let’s kick it off here with the current coach and wrestlers that we’ll all probably be most familiar with.

Pat Smith is the younger brother of John and in 1994 became NCAA wrestling’s first four-time NCAA champion. To some that would almost make him a lock for No. 1, but I actually struggled a bit with whether or not to even include him on the list as he started his career at OSU before John was hired. Ultimately, if you consider him a part of the John Smith coaching era, it’s tough to argue he doesn’t deserve the top spot.

Dieringer is one of three three-time NCAA champions on this list and one of two Hodge trophy winners. As the only one who can claim both of those accolades, he grabs the second slot. Most people reading this will know Dieringer better than anyone else on this list as he’s still an active competitor on the senior level. His time at OSU was about as dominant as it gets. He nearly made the NCAA finals as a freshman and just absolutely wrecked people from his sophomore to senior year. His wide array of offense attacks along with his speed and power made him nearly unstoppable on his feet during his time in the orange singlet.

Branch was somewhat interesting to rank here. He only had two titles compared to Guerrero and Rosholt, who both had three. Branch was known for having somewhat average regular seasons (even coming into the NCAA tournament his freshman year with a losing record) then really showing up when the lights come on and performing well at the NCAA tournament. He was a four-time finalist and two-time NCAA champion. Ultimately, I gave him the nod over the two three-time champs due to his four NCAA finals appearances.

Guerrero has now gone over to the dark side and coaches at the Oklahoma RTC, but his time as a competitor at OSU really places him as one of its all-time greats. He finished fifth as a freshman, then rattled off three-straight NCAA titles and an undefeated season as a senior. He then became an Olympian in 2004. Guerrero and Jake Rosholt both had very similar resumes, but Guerrero’s Olympic spot gave him the slight edge over Rosholt on this list.

Mark Branch was an assistant at Oklahoma State during Jake Rosholt’s time in orange and black and, from the outside looking in, it feels like they must have had a very strong connection. Rosholt and Branch were both known for taking their fair share of losses during the regular season then showing up at the NCAA tournament and lighting things on fire. Rosholt was a 10 seed in 2003, a 2 seed in 2005, and a 4 seed in 2006. He won NCAA titles in each of those seasons and finished third as the 3 seed in 2004. Truly the main anchor for the Cowboys during their run of four-straight NCAA titles during that time.

As I went over this in my head while making the list, I generally put most of the three timers, with the exception of Mark Branch, ahead of anyone with two titles. I personally think, and most OSU fans that are reading this probably agree, that Oliver won three titles. Unfortunately, on the record books he only has two. His NCAA final from his junior season is marred with controversy, but ignoring that… Oliver was about as dominant as we’ve seen recently at Oklahoma State. He just picked guys apart, his ankle pick was so nasty and his quickness off the whistle was tough for just about anyone to handle. Of the former OSU guys vying for Olympic spots in 2021, I feel Oliver has the best shot of any former Cowboy. And as a wrestler that we all generally feel won three titles, he gets the highest spot of the two-time champs.

If you don’t remember the controversial final I’m talking about, here it is.

Hendricks was one loss to John Smith’s nephew from being a bit higher on this list and in the minds of most Oklahoma State fans. He was great during his time in Stillwater, a four-time All-American, three-time NCAA finalist, and two-time champion. The thing that will always be most talked about in his legacy is his rivalry with Mark Perry, the nephew of John Smith and brother of current OSU assistant Chris Perry. Hendricks, who was from Edmond, was recruited over Perry and in one of the more shocking turns in the sport, Perry went to wrestle for OSU’s arch rival Iowa. For the most part Hendricks got the better of Perry, but in his senior season Hendricks fell to Perry in the NCAA finals. Hendricks moved on from wrestling to MMA and eventually became a UFC champion.

Pendleton is the only person I have on this list that was not a four-time All-American. He earned the honor three times finishing third in 2003, then picking up titles in 2004 and 2005. The reason I have him on here ahead of a few other is the most talked about part of Pendleton’s career, his “rivalry” with Ben Askren. Pendleton beat the two-time Hodge trophy winner in the finals during both of his NCAA championship runs.

Thompson will go down as one of my all-time favorites at OSU. I was in late middle school/early high school during his time at OSU and for me, that’s when my OSU and wrestling fandom was at its peak and Thompson was everything I wanted to be. He was just a one-time state champion out of high school, wasn’t very flashy, and hit moves that nearly every wrestler had done since grade school, stuff that no one thought would work in college, but it did for him.

Just an unstoppable blast double and a snake that he launched people all over the place with. He finished second at the NCAA tournament as a freshman, won titles as a sophomore and junior, then finished third as a senior.

Coleman Scott — I left Coleman off because he had one NCAA title compared to all of these guys that had two or more, but he’s the only NCAA champ of the John Smith era that also won an Olympic medal. The Olympics is obviously the pinnacle of the sport and as we’ve seen historically it’s a much tougher task to win an Olympic medal than it is to win an NCAA title, so it could certainly be argued that Coleman deserves to be higher on the ladder for his bronze from 2012.

Alan Fried — Fried had one NCAA title, two runner up finishes, and was forced to miss one season while the Cowboys were on probation in 1993. I didn’t really know how to rank him with that unknown year hanging out there, but it’s likely that he would’ve been a four-time NCAA finalist had he not missed a season.

Chris Perry — Perry was a two-time champ and three-time All-American. Every person I put on this list with the exception of Pendleton was a four-time AA, which is mainly what left Perry off. You could make the argument that Perry and Pendleton have pretty much the exact same resume with Perry bearing Matt Brown and Andrew Howe and Pendleton beating Askren twice in the NCAA finals. The way Askren dominated basically everyone he faced the next two years after Pendleton graduated has given Pendleton a lot of credit in the wrestling history books for the way he kept him off the top of the podium.

Jamill Kelly — This list largely looked at NCAA honors and when we talk Kelly, that list isn’t especially long as he was never an All-American in college. The greatest Olympian that Smith has ever coached though? That honor goes to Kelly, who finished with a silver in 2004.

Dean Heil — Heil was a two-time champ and three-time All-American. He wasn’t always the most exciting to follow, but if the NCAA didn’t add the neutral danger zone his senior year, he’s possibly a three time champ and would certainly be on this list.