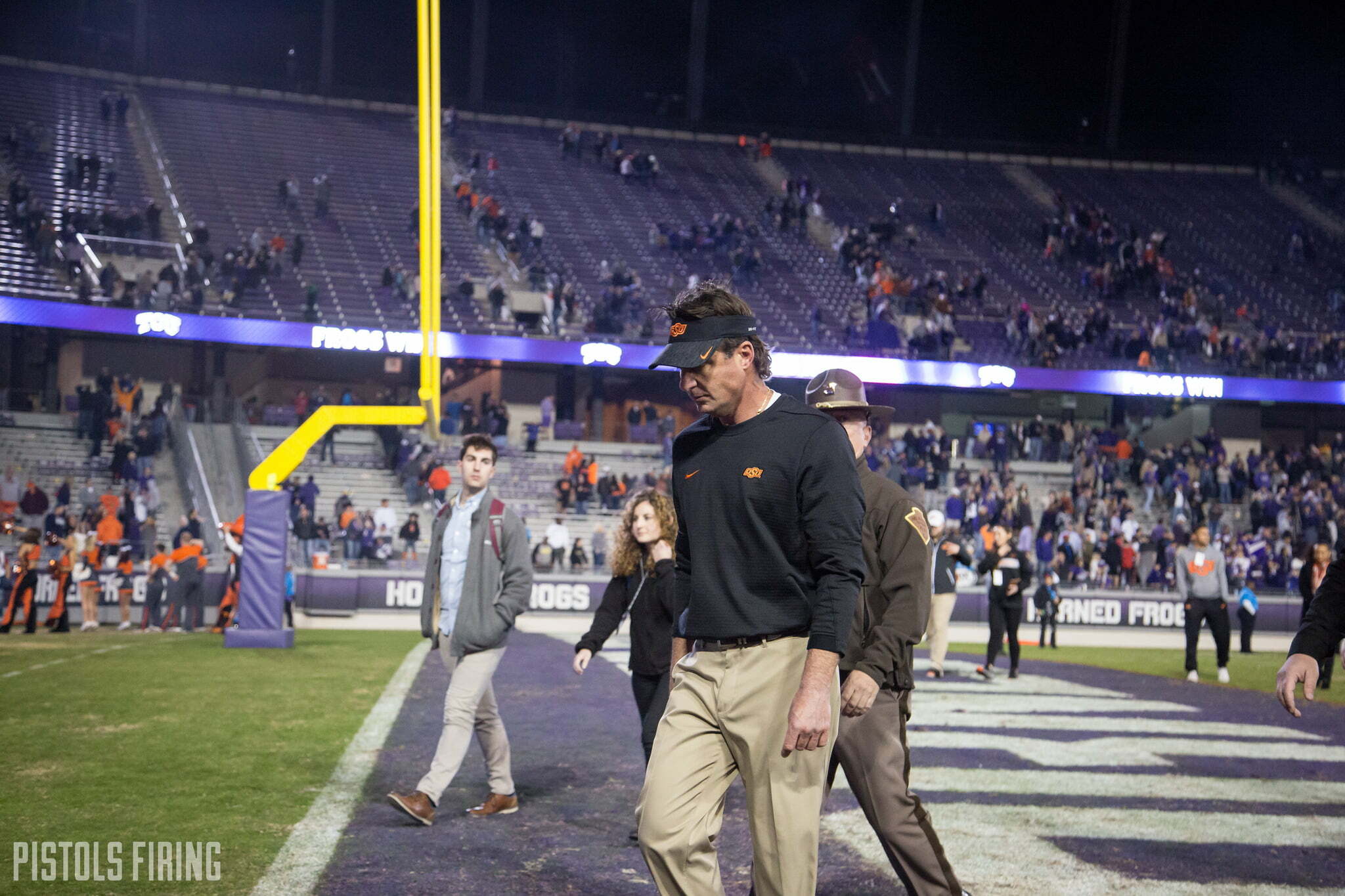 Oklahoma State’s 2018 football season, filled with a few extreme highs but more inexplicable lows, is a perfect encapsulation of what a program can go through when it does not recruit at an elite level. In Stillwater, OSU boasts an elite coach and tactician in Mike Gundy, an elite strength and conditioning staff spearheaded by the revered Rob Glass, and top-of-the-line ancillary services to complement it all.

While all of those departments have shown marked improvement over the past decade, success in recruiting has largely leveled off — and even dipped in the last few years. Here is how OSU has recruited over the years dating back to 2005 when Gundy took the reins.

And here’s a visual representation of the national trend in that same time frame. The lower the trendline, in this example, the better finish OSU placed nationally in the recruiting rankings. 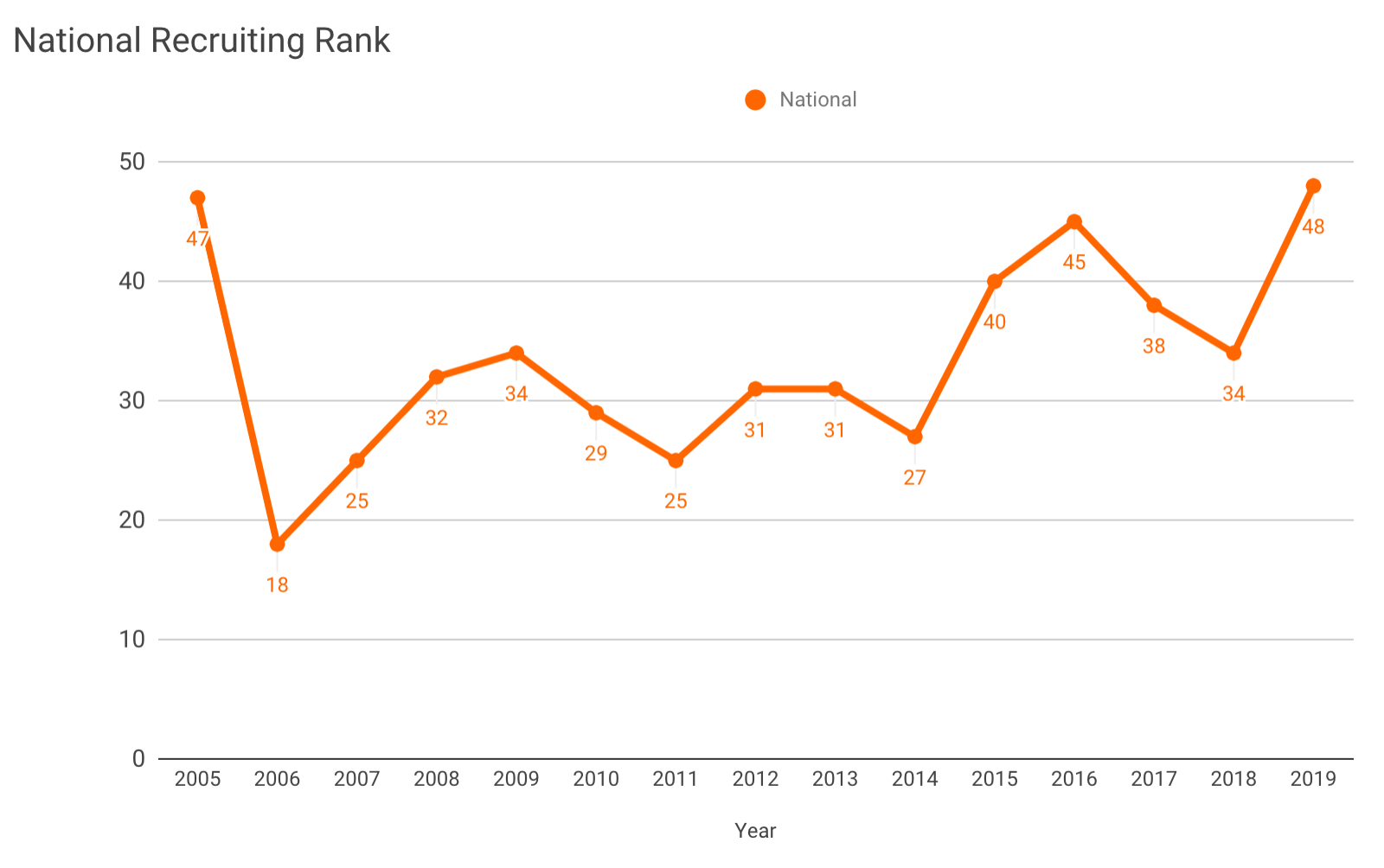 The example above — from left to right — spans 2005 to 2019. As you can see OSU improved from Year 1 considerably, and quickly, jumping from 47 to 18 in Gundy’s first class. Over the last few years, however, things have tailed off.

OSU hasn’t brought in a top-25 nationally ranked class since 2011, interestingly, the same year OSU won its only Big 12 title.

It’s a credit to Gundy and the program he’s built and sustained that Oklahoma State has been as competitive as it has been, winning 10 games over the last three seasons and four of the previous five. But those seasons were marked with NFL-caliber QB play (or, in the case of 2013, the best defense in program history.) I’m not sure you can reasonably rely on either annually, especially the QB play.

As we’ve seen in 2018, without the rising tide of elite quarterback play, OSU is, well, 6-6. They are the definition of average — just as their finish in recruiting rankings suggest they should be. The fact that we expected them to finish higher, again, is just a testament to the monster Gundy has built.

Yet the numbers don’t lie: OSU’s average finish in the Big 12 recruiting rankings under Gundy is 5.46 (assuming 2019’s placement of eighth holds true through signing day.) Since OSU’s last Big 12 title? It’s slightly worse at 5.75 (which is actually much worse when you consider that the Big 12 has gone to 10 teams in recent years).

For those who prefer pictures in their books (guilty), here’s another visual representation, this time of Big 12 recruiting rankings under Gundy in trendline form. Never has OSU finished higher than fourth in the conference, and twice since 2015 OSU has finished seventh or below — something they did only once (in Gundy’s first season) in the 10 years prior.

OSU, again, is likely on its way to make it a third time since 2015 of finishing seventh (or worse) in Big 12 recruiting. 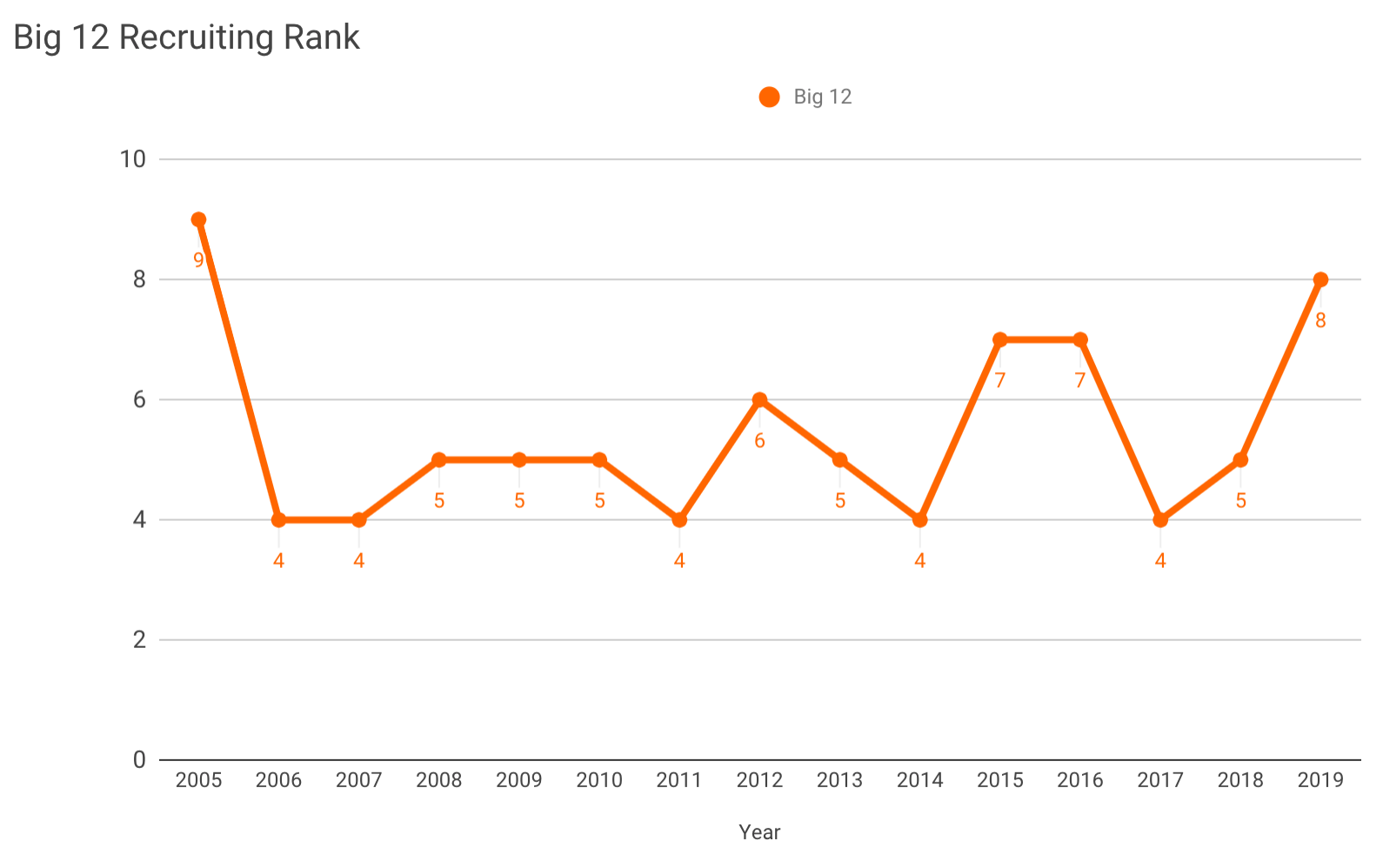 So why is this a problem? Well, I noted before (and earlier this season) that QB play is a rising tide. Now let me show you what that means. If the goal is playing for Big 12 titles, I’m not sure that’s going to be happening for these Pokes anytime soon, barring a change in recruiting performance.

OSU has only outperformed its four-year Big 12 recruiting average by more than two and a half spots in the final Big 12 rankings four times in the Gundy era.

*Does quick math on this*

That means that OSU must either have a NFL QB at the helm (maybe it will next year) or overperform at an unprecedented level to finish in the top two in the Big 12 and play for a Big 12 title. That’s an unfortunate reality, but a reality nonetheless.

Unless OSU has a future NFL Draft pick at QB at any given time — something that may or may not be repeatable — it appears the Cowboys are going to have a really difficult time playing in Arlington on the final weekend of the Big 12 season for a chance to raise Gundy’s second Big 12 Championship trophy.