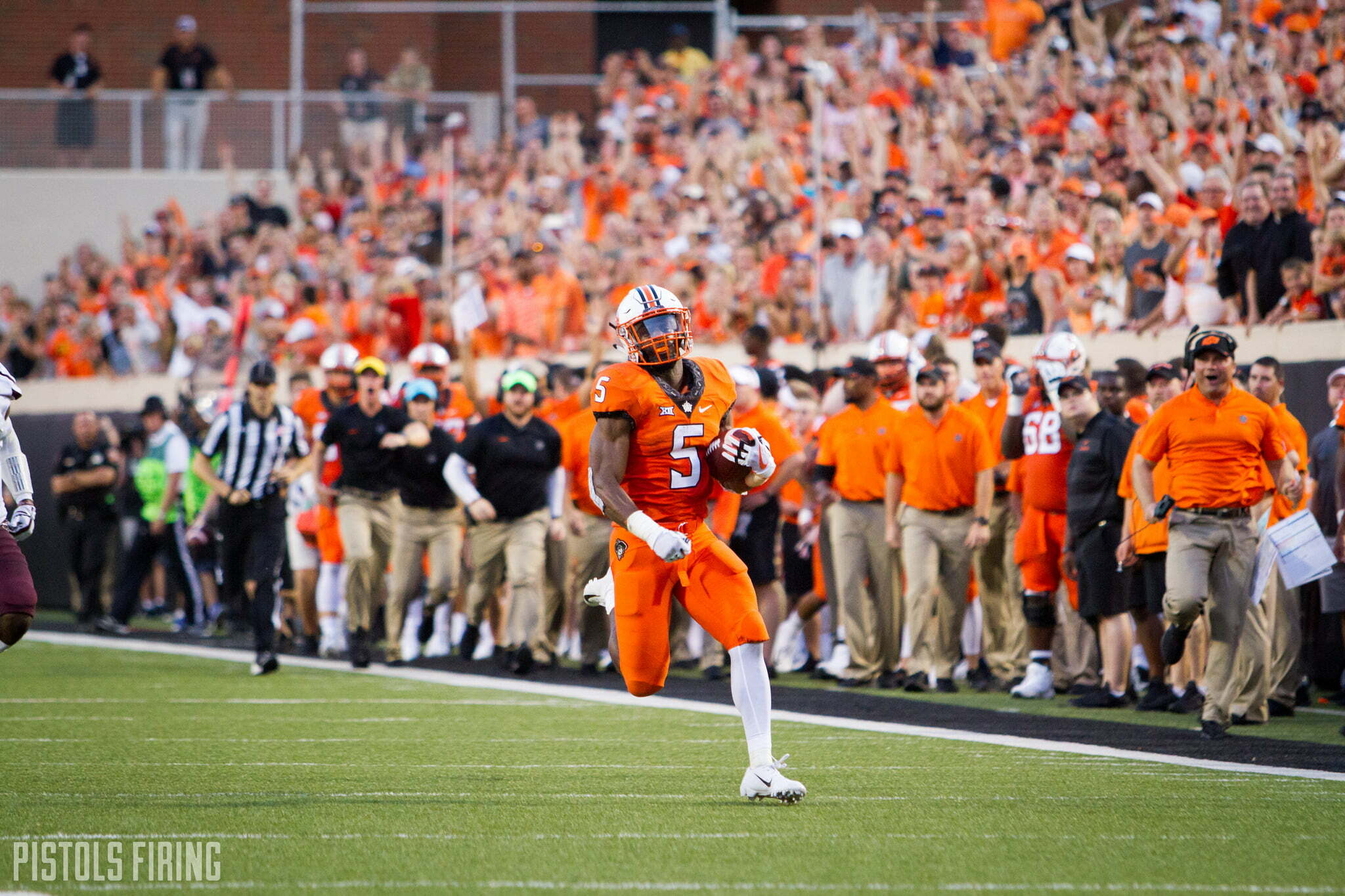 We are just over a week away from the 2019 NFL Draft which means that everyone has a mock projection, an opinion and a mock. So let’s look at the latest from #DraftTwitter and those covering these NFL teams as it relates to OSU’s draft-eligible departures.

How Justice Fits Alongside the ?

The Boston Herald‘s Kevin Duffy looked at some draft-eligible running backs, a position of need for the Patriots and highlighted three prospects and how they would fit in Foxborough.

Sony Michel is the unquestioned starter, but New England has had a rash of injury issues in the backfield and adding quality depth is a priority.

Undersized at 5-foot-10, 198 pounds, Hill is a ridiculous athlete (4.40 40-yard dash, 40-inch vertical leap) who would bring an element of explosiveness to the New England offense. Like Henderson, he profiles as a complement to Michel and White. [Boston Herald]

I could absolutely see Justice taking handoffs from Tom Bradt and thriving with the Pats under Bill Belichick, as long as he’s on his rookie deal.

USA Today‘s BucsWire talks about how Justice could help out Tampa Bay.

Justice Hill would be a good pickup in the fourth round if he’s there. Tampa Bay needs to strengthen their backfield if they want to give Jameis Winston a chance at succeeding this season. Hill rushed for 930 yard and nine touchdowns this past season for Oklahoma State. His best season came in 2017 when he ran for 1,467 yards and 15 touchdowns. [BucsWire]

NFL.com’s Michael Fabiano put together his list of the top 30 pre-draft rookies in terms of fantasy value. He tabbed Justice as No. 20.

Hill rushed for over 3,500 yards and 30 touchdowns during what was a productive career with the Cowboys. He was also a star at the Combine, ranking first among backs in the 40-yard dash, the broad and vertical jumps. He also caught 31 passes in 2017. [NFL.com]

The Market for Cornelius

The Minneapolis Star Tribune tabbed Taylor Cornelius as one of five names to know in case the Vikings decide to add depth at QB behind Kirk Cousins.

Another unpolished prospect with natural talents is Cornelius, who was not invited to the combine but should draw interest as an undrafted free agent. He’s listed 6-6 and 232 pounds, making him an interesting project after he threw for 32 touchdowns and 13 interceptions in his lone season at the helm. [Star Tribune]

And Draft Diamonds, an NFL draft blog, is not the first to consider the OSU passer a combine snub.

Cornelius only started one year for the cowboys, but put up huge numbers in his one year starting as he was responsible for 42 total touchdowns. Cornelius was also top 10 nationally in passing yards and passing touchdowns. Again, like Dungey, I think Cornelius is a better prospect than some of the guys at the combine and could be a late round pick. Here is a quick clip below showing Cornelius’ arm strength and ability to move in the pocket. [Draft Diamonds]

Cornelius is unlikely to get selected next weekend but should at least gain some interest as an undrafted free agent based simply on this his measurables and his numbers from last year.

In his seven-round mock draft for CBS Sports (God bless him), R.J. White has two Cowboys both being selected on Day 3.

White has Justice Hill going to the Jacksonville Jaguars in the fourth round (120th selection overall).

They then scoop up some depth at running back in Hill, who had a great combine and should shine as a fill-in whenever Leonard Fournette is injured. [CBS Sports]

He also has Jordan Brailford going in the fifth round (154th overall pick) to the Carolina Panthers.

Walter Football has Justice going to the Buffalo Bills in the third round at No. 74.

LeSean McCoy won’t be on Buffalo’s roster for very much longer. In fact, there’s a good chance 2019 will be his final year with the Bills. [Walter Football]

And Brailford going No. 122 overall in the fourth round to Pittsburgh to join a couple of former teammates.

Justice Hill showed his conditioning and burst this season when it mattered most and was the highest-graded 4th quarter running back out of the Big-12. pic.twitter.com/RJINrHtAxo

Tyron Johnson is also getting some mention as a possible late-round pick or undrafted free agent.

Oklahoma State WR Tyron Johnson did not get into our Draft Guide containing 76 different draft-eligible wide receivers, so you should find him in the undrafted region.

5 star, #2 WR in country. Transferred from LSU to Oklahoma St. Did kickoff returning 2017

A late round/UDFA WR I really like is Tyron Johnson from Oklahoma State. Got overshadowed by Tylan Wallace, but Johnson can play. Good speed, uses his hands and fights for balls well. I think he will outperform his draft position.