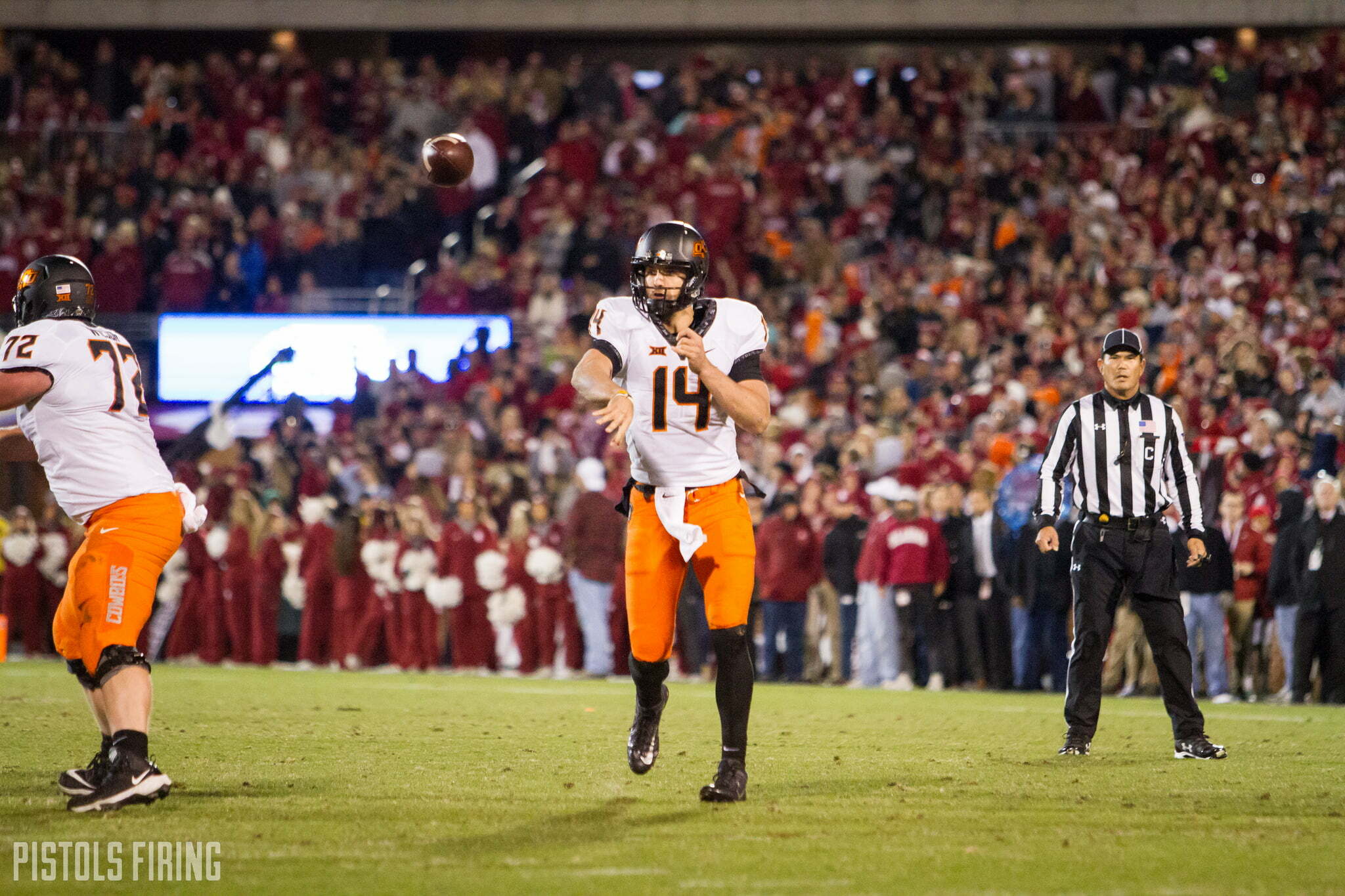 Oklahoma State will hold its pro day next month, and of the group of NFL hopefuls expected to showcase their skills, Taylor Cornelius probably has the most to prove to NFL scouts.

The polarizing QB who was thought by many to be a spring stand-in for Spencer Sanders retained his starting job throughout the entire year. It was an up-and-down single-season campaign for OSU’s former walk-on, but he did enough during the 7-6 season to become at least an intriguing prospect at the next level.

Before his career 501-yard, three-touchdown Bedlam showing, ESPN’s draft expert Todd McShay prognosticated that the fifth-year senior could be a late-round draft pick.

“I’ve seen this year development throughout the season, big-time arm,” McShay said. “I’ve even talked to NFL scouts who think he could, despite the lack of experience, wind up being a late-round pick or priority free agent and get a shot at the NFL.”

So let’s take a look at Cornelius’ case as an NFL prospect as well as where he’s projected by talking heads and what helps and hurts that case.

You won’t find Cornelius in any mock drafts, but that doesn’t mean he’s completely out of the discussion as evaluators and forecasters look ahead to April.

The Draft Network tabbed Cornelius as the top QB snub from this year’s NFL Draft Combine.

Cornelius was a Shrine invite and one-year starter for the Pokes. Big-bodied with a decent arm, Cornelius added a nice rushing attack dimension to Mike Gundy’s offense, but overall he lacks the accuracy to make a big mark for an NFL team. [The Draft Network]

Fran Duffy who writes for the Philadelphia Eagles’ website also considers Cornelius’ exclusion from the combine invitee list a snub.

Cornelius is a big-bodied passer who only started one year for Mike Gundy and the Cowboys at OSU, but he was pretty productive this fall and has NFL tools. Cornelius has huge hands, a good arm, and impressive touch to all areas of the field. The senior throws a nice deep ball, which we saw at the East-West Shrine Game.

He will have to adjust to more of a pro-style offense, but I think he has tools to develop into a solid backup at the next level. In my opinion, he has more to work with than some of the other signal-callers who got the call ahead of him for this event. [Philadelphia Eagles]

Draftscout.com ranks Cornelius No. 14 among draft-eligble QBs and gives him as a seventh round-to-undrafted grade.

Although he put up some big numbers in several games, Cornelius was inconsistent overall. At times he showed questionable decision making which contributed to his Big 12-leading 13 interceptions, and he showed a propensity to take bad sacks, as well.

And let’s be honest, he was a walk-on without a D-I scholarship offer and was never really in mix for starter’s reps until 2018. Teams look at those types of things.

His 4-of-7, two-interception showing in the East-West Shrine Game did little to boost his case.

If you look at his measurables, there’s a lot to like about Cornelius if you’re an NFL scout. As mentioned above, his size, hands and arm strength check all the boxes, and his adequate running ability is a nice bonus.

Throw on some tape of his Texas, West Virginia or Oklahoma games and his upside is apparent. It all comes down to how high teams actually see his ceiling and how much they think they can develop him.

It’s also important to remember that though he’s long in the tooth in terms of age, he was basically unproven coming into last spring. Given the right situation, Cornelius should still continue to develop as a player.

PFB Prediction: Late Round to Undrafted

It’s possible that a team takes a flyer on Cornelius, but I think it’s more unlikely that he goes undrafted, which may be better for his chances in the NFL. That would give him a chance to field offers from multiple teams and choose his destination based on fit.