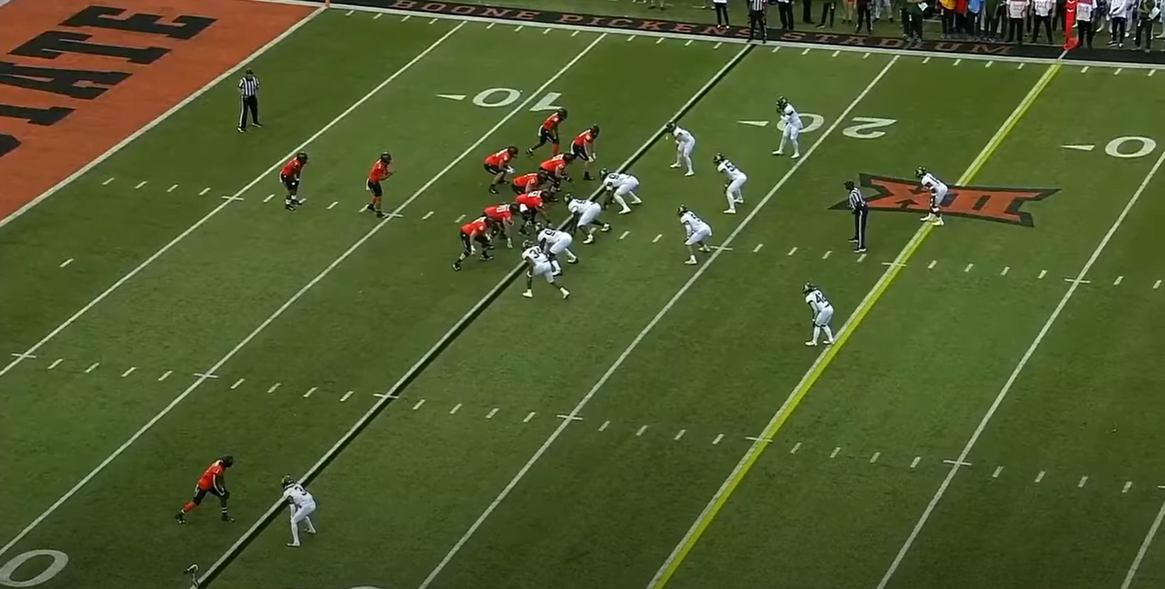 This article was first published on PFB+ on Wednesday. For exclusive access to this and other premium content from the PFB team, make sure you are subscribed to PFB+.

The Oklahoma State Cowboys picked up their second Big 12 victory this past Saturday against the Baylor Bears. OSU is now 5 – 0 on the season and they get an off week before heading to Austin to take on Texas. Cowboy running back Jaylen Warren had another big day on the ground, carrying the ball 36 times for 125 yards and two touchdowns. OSU Quarterback Spencer Sanders was 13-of-23 for 182 yards and a touchdown, but he also turned the ball over three times. His primary target was wide receiver Tay Martin, who had 6 grabs for 110 yards.

For Part 1 of this week’s offensive film study, I’ll take a look at the overall scheme and what the Pokes were trying to accomplish against the BU defense on Saturday.

Similar to last week against Kansas State, OSU offensive coordinator Kasey Dunn went heavy on 11 personnel. In addition, with running backs Dezmon Jackson and LD Brown still sidelined with injuries, he went completed away from 20 personnel, or two running back formations. Dunn also didn’t use much 10 personnel, or four wide receiver sets, as they only went to these 11% of the time against Baylor. One main reason for this is most likely due to the success the Pokes have had utilizing the Cowboy Backs in their Split Zone running concepts, and we saw them utilize this play excessively again BU.

In the second half, the Cowboys based out of 11p on 26 of their 34 total plays, running only five plays out of 10p, two out of 12p and one out of 13p. Also, just wanted to note that the Cowboys 13p sets actually featured offensive lineman Hunter Anthony coming in and lining up as the third tight end, so there were technically only two actual Cowboy Backs in the formation… however, I’m counting this as 13 personnel for this post.

Now, let’s take a look at the run/pass splits out of each grouping. For this set of statistics, I’m counting the lone sack as as rushing play.

Lastly, let’s look at the breakout by yards gained.

Before we get into the overall scheme, I wanted to give you a look at the Pro Football Focus Grades for the offense.

In regards to Baylor’s defensive scheme, head coach Dave Aranda and defensive coordinator Ron Roberts base out of a 3 down front. However, they like to mix in both three and four down alignments depending on the situation.

Their defensive line is led by their 6-4, 350-pound defensive tackle Siaki Ika (#62), and he is their primary run stopper, clogging up the middle. Aranda and Roberts like to have an eight-man front, or eight defenders near the box, as much as they can in rushing situations. In pass coverage, I saw them mostly mixing in Cover 1, Cover 3 and Quarters against the Cowboys.

Baylor also likes to use “simulated pressures” in which they look like they are sending five or six guys at the quarterback pre-snap, but they they only rush four. They did this several times last Saturday and caused some confusion for Sanders. For example, the interception shown in the clip below.

Along with the confusion on the offensive line discussed in the video above, you can also see Warren looking to protect the edge on the right side of the offensive formation, as it looks like Baylor is going to be sending two players from that side. However, they only bring one, leaving the running back in no man’s land and unable to get back over to inside before the BU defense does their damage. As father of two Adam Lunt pointed out to me as well, the Bears show Cover 0, or complete man-to-man coverage, pre-snap and then spin to Cover 3 zone, making it extremely confusing for the quarterback.

From OSU’s offensive standpoint, it was obvious from the first snap of the game that Dunn wanted to get Outside Zone working. I’ll touch on this in more detail in Part 2, but 76% of the Pokes’ rushing attempts were Zone based runs. If you remove the quarterback scrambles and the sack, that number jumps to 81%. In addition, of the 44 rushing attempts by Warren and Dominic Richardson, 31 of them were some type of Outside/Wide Zone concept. One other item of note in the rushing attack, once Dunn got the Outside Zone game working, he stuck with it and didn’t really mix in very many read plays in which Sanders had the opportunity to keep it himself.

Dunn dialed up some Option runs, which I really hope we continue to see more of as it gets both Sanders and Warren, two talented runners, in space.

Through the air, Sanders mainly attacked the middle of the field and the 10-20 yard area outside the hash marks. The Cowboys found success with the Dagger concept, which you might have heard RGIII mention on the broadcast, as well as play action set up by the running game. OSU also went completely away from their wide receiver screens, as I didn’t count one thrown the entire game. This was a little odd as they’ve found success with this play throwing the ball to both Brennan Presley and Martin, and it was also strange that Sanders pump faked the screen multiple times and looked for something deep downfield. It seems like you would want to actually throw the screen a couple of times to set up these fakes.

As we discussed above, Oklahoma State based heavily out of 11 personnel. There weren’t really any new looks out of 11p, and Dunn mainly stuck with the Cowboy Back in the H-back position, with Twins to one side and a single receiver to the other. An example of this formation is shown in the following image.

In 12p, we saw the return of the Diamond formation after Dunn went away from it against K-State.

OSU also showed their two tight end look, with both Cowboy Backs on each side of the line of scrimmage, and the tight bunch formation shown below.

Out of 10 personnel, the Cowboys were mostly in their 2 x 2 sets, with two receivers split to each side of the formation. And, in 11p it was mainly their I-formation look we’ve seen many times this season.

Overall, I didn’t hate the scheme in this one. Aranda is a defensive mastermind and if you try to get too cute on offense, his defenses will make you pay. He does well to disguise coverage and pressure which can lead to a lot of confusion for opposing quarterbacks, as you saw in the Sanders’ interception video above. Dunn obviously saw on film that his Cowboy offense could punish the Baylor D with Outside Zone and use it to open up some chunk plays with play action, and he did just that. It also seemed pretty clear that the Pokes were trying to avoid Ika whenever he shaded a particular way, and it worked out well for them.

The offensive line did another decent job in the run game, although I think they can continue improving. However, Baylor’s defensive linemen are tough to block, and you could see the OSU O-line struggling to get by them and to the second level defenders at times. In terms of pass blocking, I thought they did well, especially against a team like Baylor that can throw a lot of different looks and pressures at you.

Through the air, Sanders made some nice throws, but the second interception was terrible. As I mentioned above on the first one, he didn’t get much help from the offensive line, and the third one he had the slant against man coverage but it was a nice play by the Baylor defender, but I can’t give him any benefit of the doubt on his second pick. He has got to eliminate those if the Cowboys want to continue winning games in conference play. However, he was able to do a lot of damage on the ground and I thought he made some really nice decisions to tuck the ball and run on a couple of passing plays.

Warren was big time again, he’s not only able to make guys miss and fight throw tackles, but he’s incredibly smart when making his cuts in the Zone running scheme. It would be great to get some depth back at running back, which would allow Warren to stay fresh but also give Dunn the option to go with more 20 personnel, or two running back formations, as the Cowboys found success with these plays earlier this year.

Martin continues to show he is the go-to receiver for Sanders when they need a big play or to pick up a first down, and the versatile Rashod Owens showed that he’s ready for more snaps moving forward. The rest of the receiver group needs to continue to show that they can get open against man coverage, as they seem to struggle at times with this. However, Sanders didn’t do them any favors on a few throws last Saturday.

I think Dunn will need to get a bit more creative against Texas, as they have plenty of film on the Outside Zone scheme the Cowboys have been running. I’m excited to see what the game plan looks like against UT.

Next up, I’ll go into further detail on the Cowboy rushing attack in Part 2.